All about television
by Birgit Heidsiek

Television deals are essential for independent distributors in order to finance their MG’s and P & A. But in many European countries there is a trend towards less slots for art house movies in the programmes of the public broadcasters. At the Europa Distribution workshop in Locarno „About the role of television in the career of independent films“ about 40 distributors discussed the situation and came up with possible solutions.
The problems in the various countries are quite similar although there are some countries where the TV station is still an important partner for independent distributors. RTBF in Belgium is showing 380 movies per year in their three channels. „It is always a fight“, states Valérie Lardinois, Head of Acquisitions, „because it is easier to propose blockbuster movies than art house films.“ She buys all kind of films for the public broadcaster.
The programme of Arte reflects that the French-German channel is dedicated to culture in different forms and formats. „We are having five slots a week for feature films“, says Karen Byot, Deputy Manager of the Cinema Department. Among them there are two classical movie slots on Monday. „On Wednesday we are showing only art house movies: one in prime time, the second one at 11:30 pm“ About one third of all films in the programme of Arte are French, one third are European movies and one third comes from all over the world.

Meanwhile the situation for TV sales in Germany is getting more and more dramatic. „The slots are going down in Germany“, reports Silke Wilfinger who represents The Independents as Head of acquisitions and sales at Koch Media. „We are trying to organize the distributors who are affected.“
The independent distributors need money from the broadcasters to minimize their risk. „It also affects the world sales. The distributors can’t pay the MG’s anymore.“ The Degeto, the acquisition organization of ARD, will not buy films, especially Arthouse films, to the full extent until 2017. According to Silke Wilfinger also the SWR (Südwestfunk) stopped buying movies and takes into consideration to close even the last regular film slot while the BR (Bayerischer Rundfunk) also decreased the volume of film acquistions for 2014.

„Quality alone is not enough anymore to sell a film to the TV stations in Germany.“ Even for a film like Midnight in Paris, the prices are far lower than what they use to be and other films like The Artist or A Cat in Paris were not picked up at all by TV stations in Germany.
But even with a programme highlight such as The Intouchables it is not possible anymore to package 10 films as in the past but only 3 or four films. Fernando Riera, Director of film production and development at the Spanish distributor A Contracorriente Films says that „VOD is not helping us either. The VOD rights are bought by TV in a package. As the Telcos are the ones who are having the benefit of piracy, Telcos should be obliged to create strong and affordable VOD services to rebuild legal VOD marketplaces. A percentage of their income should be invested in the acquisition of VOD rights and relevant European cinema quotas should apply.“ Due in part to the strong market presence of Canal Plus in Spain, Netflix could not acquire enough rights for their market and postponed their launch in Spain.

Susan Wendt, Head of Sales at TrustNordisk in Denmark, reports that she is selling films to distributors as well as directly to the broadcasters. „It is tough to get the broadcasters attached“, underlines Susan Wendt. „Many broadcasters want to have the digital rights as well. The new market situation weakens the distributors.“ Therefore she welcomes the idea to confront the European Commission in Brussels with that issue and define certain guidelines.„ A pan-European strategy could be helpful“, emphasizes Fernando Riera. „In Spain, the TV stations show mostly sports and TV movies in the prime-time“, Fernando Riera outlines. „We should have quotas for European movies on quality slots on television.“In Spain it is already an obligation that half of the movies broadcasted on TV have to be European films but some broadcasters air them at 2 or 3 o’clock at night. Quotas are not only question of quantity but quality „The problem is that you always can cheat your way around“, says Susan Wendt. Therefore it is important to define guidelines which make it impossible to show the films in the middle of the night in order to fulfill the quota.

The Spanish distributor also noted, this idea being consensual among panelists, that TV stations, TV public stations especially, still have a responsibility for film literacy but they are less and less taking care of this. According to Silke Wilfinger, a lot of young people in Germany don‘t know many classic movies because these kind of films are not shown on TV anymore. The viewing habits already changed so much that some consumers are getting confused when there is a black-and-white film on TV and even consider this as a technical problem.

But the definiton of an art house film might become difficult. „For many people an art house film is basically a foreign language film“, says Susan Wendt, „but a foreign language film can be very commercial as well.“ Niche films can also have a great potential if they are not programmed in niche channels only. „The TV stations should have a regular slot at 10 or 10.30 pm where they can present quality films from all over the world“, underlines Silke Wilfinger. This way, the viewers will know what they get. „It is all about building up slots so that people know what a broadcaster stands for.“
The German head of sales and acquisition also points out that the German distributors could have a lot of power if they organize themselves and act as a group. „Without a LOI (Letter of Intent) by the distributors, it will be difficult to finance projects“, emphasizes Silke Wilfinger. If the distributors don‘t sign a contract, the producers won‘t get any funding support. This is for instance the way the German Federal Film Fund (DFFF) works because the production support is legally linked to a theatrical release with 45 prints. But also many of the regional funds only greenlight the projects if there is already a distributor attached.

After the analysis of the situation in the various markets, the independent distributors figured out different ideas and approaches in some brainstorming sessions. Each step of the value chain should be equally strong. The overproduction is an issue that is not only affecting distributors but also exhibitors, broadcasters and the producers themselves. „There is not a lot of connection between the different interest groups“, states Silke Wilfinger.

A quota for European movies needs to be discussed since S-VOD will become the pay TV of the future. But a quota for certain slots won’t necessarily make sense in the digital age because the young audience is more orientated towards Event Cinema. Another idea is to create awareness for independent European movies by creating a European TV day.
Since it is important to continue to cover this topic and look for possible solutions, Europa Distribution will continue the discussion through workshops and a working group within the network : all feedback is welcome, if any you have any ideas or comments you can contact email hidden; JavaScript is required 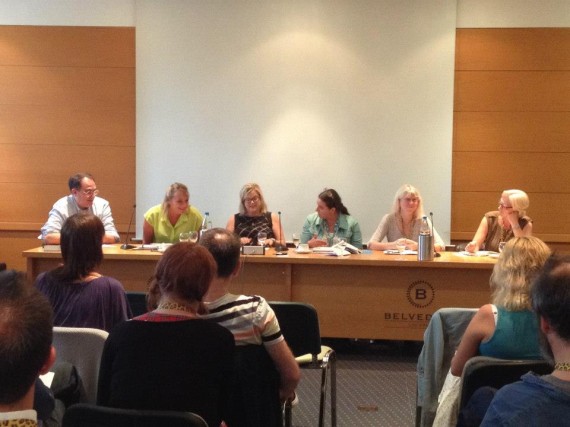