This year Europa Distribution celebrated the 7th anniversary of its partnership with the Sofia Meetings, bringing over 20 distributors to the 21st edition of the Sofia International Film Festival from March 16 to March 19.

Besides attending the festival’s activities, the members of Europa Distribution gathered on Friday 17th to discuss the new forms of collaboration between Film Festivals and distributors in a private workshop entitled “Dial A for Audience. How can Distributors, Film Festivals and Exhibitors join efforts to make this long distance call”. Coming from 13 different countries, different types of companies and different professional expertise (from managing to acquisition to marketing and theatrical sales), the members could compare their different markets and exchange ideas, success stories and discuss some problematic situations.

On March 18th the experience sharing moved to an inter-professional dimension, with a joint session with the exhibitors from the Europa Cinemas network. The panel entitled “Bridging the Gap – Building Relationships and Designing Experiences” focused on the collaboration between distributors and exhibitors in promoting and marketing films. Martin Blaney, German correspondent of Screen International, moderated the discussion.

Madeleine Probst, programmer at the Watershed cinema in Bristol as well as vice-president of Europa Cinemas, started off the panel presenting the BFI “New Release Strategy” Programme, designed to support foreign language films perceived as “challenging” in a market dominated by English spoken content. The initiative was conceived to help distributors (nationally) and exhibitors (locally) to extend the reach of their marketing campaigns on the 9 titles selected by the programme. Madeleine discussed the example of Mustang, distributed in the UK by Curzon Artificial Eye, highlighting the benefits of working hands in hands with the distributor as “the goal is to enhance and not duplicate their work”.

The second speaker, Hrvoje Laurenta (Kino Europa), also represented Europa Cinemas: until 2008 he worked as arthouse exhibitor in Croatia as well as executive director of the Zagreb Film Festival but he felt forced to move also into distribution to have films to screen in his cinema. “Multiplexes were forcing distributors to only give us their films after they had been screening them for 1 month, a humiliating deal which Kino Europa always refused to take. In 2008 for an entire month we had only one film to screen in our cinema.” Hrvoje also realized that since the screening fees requested from the Zagreb Film Festival were just 1/3 less than the full packet of rights for the whole territory (which includes also TV), buying the rights for national distribution would help to maximise the costs.

Bringing the experience of similarly sized market, Ruta Svedkauskaite (Kino Pasaka) shared the perspective of an independent distributor working in Lithuania, a country with only 5 arthouse cinemas. One of those is owned by Kino Pasaka and while of course the cinema also screens the company’s films, representing an indispensable asset for the distribution, its programming remains fundamentally independent.  Proving the essential role played by venues and special screenings, Rūta presented one of the latest experiment of her company who last summer rented the open space of the National Museum to create a “Cinema Under the Stars” programme. The experiment succeeded, making 13.500 admissions in a season where people in Lithuania don’t usually go to the cinema and also attracting a new audience, intrigued by the event and the location.

Moving to a much bigger market, Joe Kreczak presented some late projects of Curzon Artificial Eye in the UK. From a cinephile spirit more than a commercial thinking, the company raised the idea of bringing back to the cinema the films of Andrei Tarkovsky. After years of legal negotiations for the rights and with the help of a BFI’s fund, finally in 2016 the retrospective took place, bringing Tarkovsky to a new audience. Experts from different fields (fashion, architecture, psychology…) were involved in the presentation of the films that collectively made 17.000 admissions, encouraging Curzon to secure TV sales.

Going from edible cinema screenings (Our Little Sister) to accessible versions for visual impaired of the film Notes on Blindness (whose tour was accompanied with the VR experience of the film Into Darkness), to the most famous free public screening of Asghar Farhadi’s The Salesman in Trafalgar Square on the Oscars night, Curzon, like many other European distributors and exhibitors is investing its energy on the added value of the cinematographic experience: “Alfred Hitchcock once said that you should treat actors like cattle and it feels that many multiplex cinemas in the UK treat their audiences in a similar way. I feel that the independent cinema market has adapted and does the opposite, treating its audiences to an experience.”

The Panel “Bridging the gap” was co-organized by Europa Distribution and Europa Cinemas who have been collaborating for four consecutive years with the aim of building a fruitful and continuous dialogue between these two essential sectors of the industry to build audience and momentum around a release. 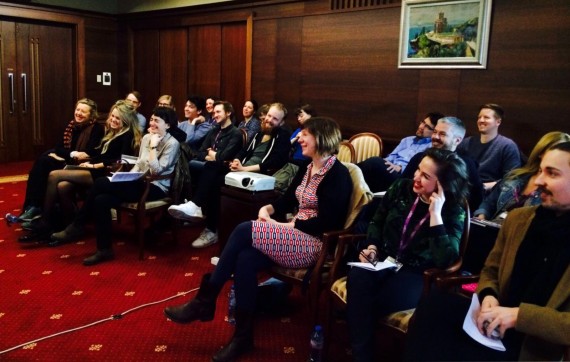