Communicating honestly and early across the value chain is key to boosting an independent film’s success, experts said at a panel at Haugesund’s New Nordic Films market, organized in collaboration with Europa Distribution for the fourth year.

Silje Kikoline Glimsdal, Sales & Project Manager at TrustNordisk, said that for a sales company to work effectively, it needs to talk honestly with a film’s creative team well before the shooting starts. “We all should be more involved from the start to have the expect
ations discussed and to have the ideas on the table with the creatives. The best strategy can come early,” she said.

“The Value Chain: Case Study of Queen of Hearts” looked specifically at the success of May el-Toukhy’s acclaimed Danish drama, the multiple-award-winning story of a middle-aged lawyer (Trine Dyrholm) who begins a dangerous affair with her stepson (Swedish rising talent Gustav Lindh).  The panel looked at the film’s journey from script stage through to its world premiere at Sundance 2018 and its success at other festivals, its big numbers at the Danish box office and dozens of territories around the world.

The panel’s experts were involved with the film at various points across this value chain: TrustNordisk’s Glimsdal; Christian Juhl Lemche, Festival Manager at the Danish Film Institute; Aiste Racaityte, Head of Sales and Acquisitions at distributor Kino Pavasaris and a programmer for Vilnius International Film Festival; and Oslo-based consultant Frances Harvey who works with UK distributor Thunderbird Pictures.

Glimsdal noted that the TrustNordisk team met with director el-Toukhy (who the sales company had previously worked with on her debut feature Long Story Short) and producer Caroline Blanco (who produced alongside Rene Ezra) at early script stage to discuss everyone’s hopes for the film. “It’s about to talk about the expectations, our expectations of what this could be,” she said. “It’s about being on the same level, if you aren’t on the same level as a sales agent and a producer I think it’s hard for us to represent the film.”

At this stage, it was also about the sales company flagging any concerns – and with Queen of Hearts, Glimsdal knew one particular oral sex scene would be tricky for some distributors. So it was discussed but ultimately the decision was left to the director, producers and co-screenwriter Maren Louise Kaehne. “We told them at script stage, this will be hard [for some buyers]. But they chose to have it.” And the creative team understood that such a scene might have to be cut for most broadcasters or some theatrical distributors. “We all agreed on that from the start, that there might have to be some editing [in some territories]. The creative team agreed to that.”

For a film like this, festival positioning was crucial. “I knew this film NEEDED a festival,” Glimsdal explained. “This type of film wouldn’t have a chance if it didn’t have good media attention and that festival buzz. We needed to have that in the whole strategy and positioning of the film before it was shot.”

Lemche of the Danish Film Institute noted, “We started talking about the film to festivals at Cannes 2018.” Because the film had a slot in the very influential Danish Cinema Club for a March 2019 release at home, that meant a Cannes launch wouldn’t be a likely fit. A Sundance/Berlin combination became the target.

The team showed very strong work-in-progress footage at Haugesund’s New Nordic Films in August 2018, which was seen by industry experts including buyers (such as Harvey) as well as programmers (like Sundance’s Heidi Zwicker). Lemche also talked more about the film with Sundance at Toronto in September 2018. Berlin turned the film down for its Competition but Sundance had jumped on it, and Rotterdam for its European premiere.

Sundance proved the perfect launch pad, as the film won the audience award in the world cinema dramatic competition. That buzz built thanks to screenings in Rotterdam and at Goteborg (where the film won the lucrative $110,000 Dragon Award). By the time of TrustNordisk’s market screenings at Berlin’s EFM in February, Queen of Hearts like a must-see for buyers. TrustNordisk sold the film to 30 territories, with most deals done in that Sundance/EFM timeframe.

There was interest from the worldwide VOD platforms but TrustNordisk thought the better route was to sell territory by territory.

Thunderbird was tracking the film keenly after the Haugesund WIP thanks to the quality of the scenes presented and the team (as well as the seal of approval being sold by a top company like TrustNordisk). The Thunderbird team saw a link before Sundance and made a competitive offer before the film screened publicly in Utah. Harvey noted, “The filmmaking talent and subject and female director made it an interesting film to position.”

For Vilnius International Film festival and its sister distribution company Kino Pavasaris, Racaityte had to act quickly after the film was announced for Sundance to secure it for their festival in March 2019 and a theatrical release immediately after. “It was important to see the film as early as we could, it’s incredibly important to have a sales agent that trusts us to do that,” she said. “It’s an outstanding film,” she added, “and it was so interesting to see female passion on screen. But it was in some ways risky for us. But in the festival it was an amazing success, it was number three in terms of audience votes and number five in terms of ticket sales, which was a great result for such a challenging type of movie.”

The overall result in Lithuania was that Queen of Hearts had 6,000 admissions during the festival and then 2,000 regular cinema admissions afterwards. “That’s three to four times what other Nordic films might achieve. It’s a big success for us and we’re super pleased…It’s the platform of the festival that can position more challenging films.”

Some territories like France have P&A support for international distributors – and the Swedish Film Institute introduced this in late 2018 — but Denmark doesn’t offer such incentives. Lemche said, “It’s been talked about for a while but I don’t think it’s on the map right now.” Reasons for that include government seeing film related to cultural backing rather than trade/export. The Danish Film Institute does offer support for its films to travel to select festivals (and the team took advantage of that for Sundance).

In Denmark, the film has been both a huge critical success (five-star reviews) as well as a smash hit at the box-office. Thanks in part to its Cinema Club selection (which lets members see the film at half price), the film has racked up 330,000 admissions since its launch in March via Nordisk.

In the UK, Thunderbird has been delayed in setting the film’s UK launch date while waiting for other partners (Broadcasters and VOD platforms) to click into place. The company has been talking to broadcasters since January about the title, with interest but no deal in place yet.  Harvey said, “Where we almost lose control is when we’re waiting for other decisions, so if we could speed up that process even if we’re getting definite answers quicker.”

“We need a partner to make it stand out at release, we can’t just send it out there and hope that people will show up,” she added. If a platform like MUBI were to get involved with Queen of Hearts, then that can raise its profile as well as having it’s MUBI GO theatrical incentive “adding to the urgency to see a film.”

The next step will be more international territories launching the film theatrically. And all eyes will be on the Oscar submission – the film is now one of three shortlisted for Denmark’s submission with the final entry to be finalized in September. An Oscar nomination or win could impact the film by making it more well known to foreign audiences (no US deal is in place yet although discussions are ongoing), or adding new territory sales, or indeed “bumps” to existing deal levels. Lemche said an Oscar nomination or win would be a huge boost to el-Toukhy’s long-term career. After all, the last Danish director to win an Oscar, Susanne Bier, has gone onto huge international hits like TV’s The Night Manager and Netflix’s Bird Box.

It could prove a very topical Oscar nominee as well. It sometimes takes more than just a brilliant film to connect to audiences, and Glimsdal noted that 2019 was the perfect year for Queen of Hearts. “The timing was perfect with this, it was the post-#MeToo period. It was good to see a strong woman on the screen be a devil as well.” 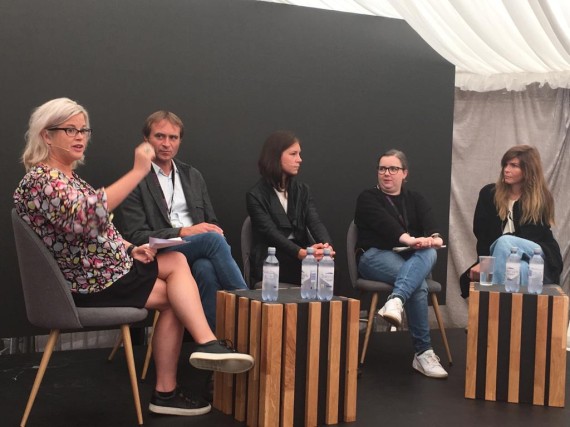