For the second year in a row, in partnership with the Festival’s Industry Talk programme, Europa Distribution co-organized various events at IDFA focused on the distribution of documentary films. On November 25th, a public panel was held at De Brakke Grond, dedicated to a very specific case study: the life-cycle of Solo, a creative documentary by Artemio Benki. Benki is a French director, producer and distributor based in Prague, where he founded Czech outfit Artcam Films in 2000. Solo is his feature-length directorial debut, a Czech-Argentinian-French-Austrian co-production which had its world-premiere earlier this year in Cannes. The film follows young Argentinian piano virtuoso and composer Martín Perino, who after having a breakdown was diagnosed with schizophrenia and spent four years at El Borda, the largest psychiatric hospital in Latin America. The case was presented by Petra Oplatkova from Artcam, major co-producer of the film, and Manuela Buono from Italy’s Slingshot Films, which handles the international sales. The presentation was moderated by digital marketing expert Mathias Noschis (Alphapanda, DE), who opened the floor to the audience and guided the discussion.

SOLO: Case study on the life-cycle of a documentary

Oplatkova started out by offering a general overview on the film’s history and production process, which started 5 years ago during a visit to Ventana Sur. While attending the market in Buenos Aires, Benki visited El Borda, where he was captivated by Martín’s story. Over the following year, he started working on the script while establishing a closer relationship with the protagonist. In 2016, the film was pitched for the first time at the When East Meets West (WEMW) in Trieste, under the working title Fugue. “Since the beginning it was really important for us to include both the musical aspect and the psychological one in the title”, said Oplatkova. The project received an award and became “the most hyped pitch” at the Italian gathering, according to Buono, who decided to join the venture at that moment. After Trieste the project took part in different workshops and got granted support from various funds such as MEDIA, Eurimages and the Czech Film Fund. In September 2018 Solo was selected for the Venice Gap Financing, and in 2019 it took part in the Sofia Meetings Works In Progress. At that moment the film was almost ready, so it was time to face the first big decision and dilemma for distribution: its world-premiere.

After the hype it generated throughout its production process, in early spring 2019 the film was invited to the main competition of a very important and prestigious documentary festival. However, both the production team and the sales agent felt like they didn’t want to position Solo as a “documentary”, but as a “film”, confident that the story was strong enough to make the cut at a bigger festival. As expressed by Oplatkova: “For us it was a very difficult decision, because Solo is somehow in the border between a documentary and a narrative film, so our ambition was to premiere at an A-list festival, which would gather both fiction and documentary films”. Finally Benki decided to decline the offer from the documentary festival and waited… And a month before Cannes they got a call inviting the film for their ACID programme (one of the festival’s sidebars, devoted to independent films), where it eventually premiered. As pointed out by the moderator, ACID is not always on the radar for most press and industry professionals attending Cannes, so the film needed a big promotion in order to make itself noticed. “We did our best”, said Buono, “you shouldn’t go to Cannes expecting something to happen, so we worked a lot in the promotion: we had two press agents, we organized different public and market screenings, cocktails,…”. Even though the more conceptual aspects of the campaign were already advanced when they got the invitation, the team had a really short time to put together all the materials for the premiere, which ended up being a success, with the film getting great reviews and a massive press coverage.

Benki’s extensive experience in distribution played a crucial role in designing the release strategy for Solo, particularly in the Czech Republic. “We knew this was the first territory where we wanted to test the film and use it a as distribution prototype” (Oplatkova). Soon after Cannes Solo got an offer to premiere at the Ji.hlava International Documentary Film Festival in October, as part of the Czech Joy section (the competition for the best Czech documentary, which for the first time was opened to non-Czech nationals working in the country). “We also knew October was a good month, because it gave us time to prepare and also the opportunity to have Martín with us”, said the producer. Due to his personal circumstances, it was impossible for the protagonist to be present at the premiere in Cannes, whereas for the Czech release he was finally ready to travel and get in touch with the audience. Still, the road to Ji.hlava was not an easy one in terms of distribution. During the months prior to the festival, Artcam worked very hard on finding suitable partners for the film, such as NGOs and ambassadors which could help raise awareness on the topic. Solo received various awards at different summer festivals, which was a great boost for promotion, but the team was eagerly waiting for the Distribution Support from the Czech Film Fund, which was essential to build up the whole campaign and events around the Czech premiere. Unfortunately, the long-awaited support was cut by 50%, forcing the distributors to adapt and change their strategy, cutting outdoor activities and focusing on the “absolutely fundamental”: bringing Martín. “It was all very punk. Martín and the Argentinian producer had to sleep on Artemio’s couch”, confessed Oplatkova. Nevertheless, the strong campaign on social media managed to achieve great results by fostering creativity (including viral videos, recycling materials,…). A new distribution trailer, launched on October 10th (Word Mental Health Day) was also a huge asset, presenting a different tone, a more narrative approach and a touch of humor to the film. Oplatkova acknowledged that the main problem they faced from the beginning was the theme, which was perceived as an issue for many people. “As soon as they heard about mental health everyone imagined a dark and bleak film”. This was also a dealbreaker for TV channels, which refused to screen the movie. “It was really hard to fight prejudices”.

Despite all the difficulties in the process, the film had a very successful premiere at Ji.hlava, where it ended up winning the main prize of the Czech Joy section, just three days before its theatrical release. Apart from the 2 competition screenings, which made full houses, the film received outstanding media coverage, enhanced by the streaming of the Award Ceremony on national TV. However, the most special moment for Solo – and a great example of eventification, as mentioned by Noschis – was Martín’s concert at the festival tent. This was one of the pivotal points of the whole campaign, and the first test of the “SOLO³” events (a combination of screening, Q&A and concert). This strategy was later applied to a whole tour across the Czech Republic, with a total of 8 screenings in different venues: arthouse cinemas, mental health institutions and cultural centers. “We wanted to broaden the spectrum” (Oplatkova). The numbers are quite promising for the film, which has already reached over 3.200 admissions in the Czech Republic, expecting to double that figure after its release on VOD and some special screenings scheduled for 2020. According to the film’s sales agent, after the success of the Czech release the plan is to have Martín back in Europe for spring. “We managed to collect different festival premieres and distribution launches in territories such as Italy, Bulgaria or Austria, so we are trying to coordinate with him and replicate the strategy” (Buono).

On the next day, Europa Distribution members continued sharing their personal case studies during a closed workshop session. Julia van Berlo (Cineart, NL) and Jana Trnková (Aerofilms, CZ) commented on their respective release of Asif Kapadia’s Diego Maradona; Mika Siltala (Cinemamondo, FL) and Nille Stormoen (Arthaus, NO) discussed the different marketing strategies around the Finnish and Norwegian releases of Amazing Grace by Alan Elliott and Sydney Pollack; Huub Roelvink (Cherry Pickers, NL) talked about the Dutch release of Ryan White’s Ask Dr. Ruth; Michael Höfner (Gmfilms, DE) explained the case of the theatrical release of Becoming Animal by Emma Davie and Peter Mettler; Jennifer Jones (Mindjazz Pictures, DE) offered an insight into the strategy followed for their release of Tamer Jandali’s Easy Love; Daan Vermeulen (Cinema Delicatessen, NL) took the floor to illustrate two very different cases: Veearts Maaike by Tijs Tinbergen and Jan Musch and the singular CatVideoFest 2019; Kim Foss (Camera Film, DK) was joined again by Mika Siltala, and together closed the session comparing their approaches to the release of Daniel Rosenfeld’s Piazzolla, the Years of the Shark. The workshop session offered participants the opportunity to learn from each other’s experiences, while encouraging debates around topics such as the need for collaboration, their relation with exhibitors or the recent threat of crossover films taking over traditional arthouse screens. Even though every case was different, demonstrating once again that there is no magic formula for a successful release, all members agreed on the importance of developing event-based screenings in order to attract audiences, specially for documentary films. 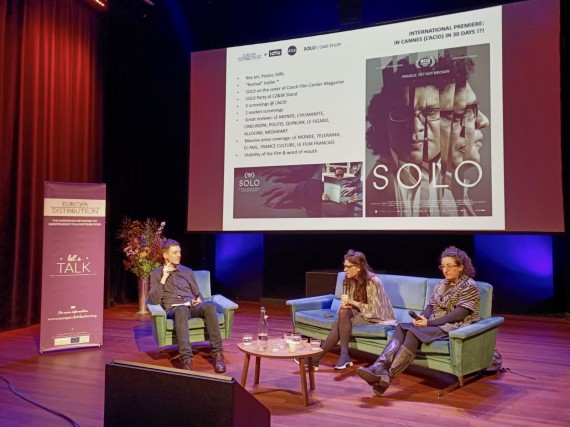