Celebrating the 10th edition of its San Sebastian workshop in partnership with the San Sebastian Film Festival, Europa Distribution proposed this year a panel on the promotion of independent films on VoD,  open to all Industry accredited of the festival. Is VoD the new Gold Rush? How can independent films hope to dig some gold out of it? The crowd who filled the Function Hall of the San Telmo Museum on September 19 proved that indeed the question echoes in the minds of many, across all sectors of the Film Industry.

The five speakers at the table, moderated by Michael Gubbins (founder of Sampo Media, UK), presented each a specific perspective on the subject: Kobi Shely, from Israel, illustrated the power of data for both marketing and programming, Alexandra Poch represented the European Union Intellectual Property Office (EUPIO), Quentin Carbonell discussed MUBI’s strategies in acquisition and audience targeting while Anna Harding offered a practical example of how indie distributors are creating their own platforms. Emmanuel Joly represented the MEDIA unit and shared the views of the European Commission.

As Michael Gubbins pointed out in his keynote speech, the “rush” towards VoD gold has rather been a slow momentum until now but recent developments, such as the interest in EU content shown by Amazon in Cannes, give reasons to start hoping. “VoD is now ready for real business. How can distributors create a demand for it?” Anna Harding illustrated her Swedish case. Folkets Bio runs 20 cinemas and is a leading company in arthouse distribution, operating in one of the most computerized countries of the world. Today Folkets Bio can count on a website where users can check the schedule of their cinema theatres, shop for DVDs and watch films on streaming, all in the same place. “For us this solution made more sense because it works both ways: we can promote our VoD catalogues in our cinemas and the other way around but it’s true that, except for a very few exceptions, when a film flops in cinemas it then flops also on all the other windows.”

And while distributors turn into providers, it seems providers touch more and more distribution grounds. MUBI made a name for itself in the past 9 years by drastically changing its approach towards online catalogues. “Offering everything just doesn’t work, besides being financially impossible. So instead of having a huge catalogue of films nobody sees, we turned ourselves into an online cinema where we offer 30 films for 30 days. Everyday one new film comes in and another one goes out,” stated Quentin Carbonell. Operating in over 200 states countries MUBI has recently started to acquire global exclusive rights for big arthouse titles such as last Paul Thomas Anderson’s Junun and ironically enough the company realized that to best way to promote its big releases on VoD is…  organizing physical screenings.

According to Kobi Shely, the ultimate value of the VoD market is data and for this reason, he warned, nor Netflix nor any other big company will ever be keen to give data away. Shely encouraged distributors to start their own “data houses”, possibly collaborating at a local level with other distributors and other parts of the industry to be more effective. “Even at very small scale data collection can be useful to identify the potential of a film”. So, is it science? “A certain degree of unpredictability, of magic as Anna calls it, will always apply but data analysis is a science and can help limiting the risks.” The members of Europa Distribution took part later to a close seminar  with Shely where the topic of data collection was developed further. .

Alexandra Poch addressed the problem of piracy presenting Agorateka, a project of a pan-European portal leading consumers to the local legal offer. Researching the habits of young audience through an anonymous survey, EUPIO found out that 35% of their interviewees either landed on websites where they didn’t know if the content was legal or not, or accidentally landed on pirate contents. Agorateka will go online next month in France, UK, Latvia and Portugal and  the EUPIO hopes to see it soon in many other EU countries.

Speaking on behalf of MEDIA, Emmanuel Joly underlined the preoccupation of the European Commission with the lack of visibility of European works on VoD platforms. While he couldn’t yet get into the details of the upcoming call on the new online distribution scheme, Joly stressed the need to work on prominence tools rather than on quotas to ensure that European cultural diversity is represented online.

The discussion about the Commission’s proposals on quotas and prominence tools was further developed in the afternoon during a private roundtable between members of Europa Distribution and representatives from the EFADs. The collaboration between the two associations started exactly one year ago in San Sebastian with a roundtable on ways to enhance the accessibility and visibility of legal offer and it continued earlier this year with a common session on Film Literacy in Karlovy Vary.

The participants to the Europa Distribution’s activities most probably left San Sebastian with the will of digging more into the VoD market, renewing maybe their set of tools in order to find some real gold for the pearls they would have picked up. 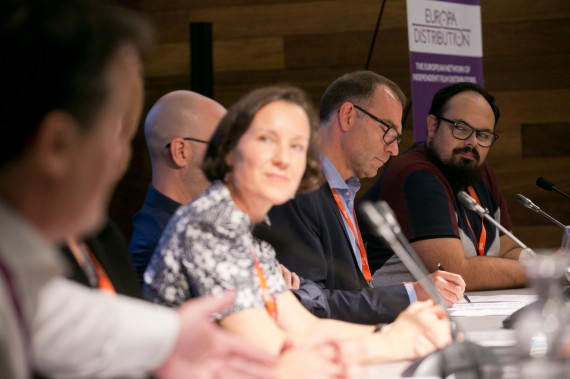