For every new film released in cinemas there are hundreds of entertainment alternatives that audience can reach with a click: whether it’s other films, TV series, reality shows or video games, the truth is that the competition for attention has never been fiercer. How can independent distributors rise above the noise, to bring the exciting new European titles to their audience?

In partnership with the Karlovy Vary Film Festival, Europa Distribution held on July 1stand 2nda two days workshop entirely dedicated to Online Marketing. GRUVI’s founder Ben Johnson guided the first part of the workshop with an intensive master class focused on the techniques and the tools that can help distributors to use data and creative assets to optimize their marketing campaigns.

Conducting proper audience research is the first step to test hypothesis on who the audience for a certain film might be. Tools such as Brandwatch or GRUVI Audience Calculator can help distributors to confirm or challenge their initial assumptions on their target audience. In this phase it is key to have some time for running tests with different kind of ads, varying visuals and texts, to know what is working and where is worth investing more budget. Unfortunately for distributors receiving qualitative material in due time is not always possible. “In a perfect world producers, sales agents, distributors and cinemas should work very closely together. Each gap creates an inefficiency that – in my hypothesis – costs to the European Film Industry around 30% loss in box office”, commented Johnson.

A significant part of the master class was also dedicated to explore the available resources for online data. Johnson stressed once again the urge for more collaboration across sectors: being able to access anonymized data from the cinemas’ ticketing website would be for example paramount to build more effective digital campaigns. This would enable distributors to retarget groups of people whose online behaviour (checking screening time) proved a strong interest in a specific film. Researches show that most of the time the final decision of buying the ticket for a film or another takes place at the very last minute in front of the counter of the cinema itself. For this reason, it’s essential that the undecided viewer gets multiple reminders about the existence of a certain indie European title beforereaching the cinema and engaging with other friends about the final choice. “Yes, the audience you are trying to reach is busy, overworked and constantly distracted but the good news is that data, also provided by MUSO piracy numbers, show that these people are actually interested in your content.”

During the last part of the session, Johnson took the distributors on a journey into the future of Social Media.  According to him, in two to three years time Facebook will not hold its current dominance in the digital landscape. Other socials will rise but it is unlikely that any of those will become as predominant. In Johnson’s view the digital media future will be characterised by fragmentation and the new marketing strategies will need to keep into account a much larger number of platforms to engage the public conversation in the media where it’s taking place.

Over the second session of Europa Distribution’s workshop, distributors had the opportunity to discuss among themselves about their marketing strategies and their visions of the future. What percentage of the P&A budget should be devoted to testing the campaign online? How to address negative comments on social media? The discussion during the round tables gave the opportunity to all members to raise the questions and ideas more urgent for them, and a number of different topics were tackled.

While a group focused mainly on the advantages of collaborating with influencers and micro-influencers, involving them in the creation of tailored made podcasts on films, another discussed about the possible approaches a distributor could use to begin to raise awareness about a new release even while still lacking visual materials from the film. The importance of trailers and teasers and the idea of using some simple tricks such as putting the logos at the end to keep the viewer captivated over the first 5 seconds were also largely discussed among different groups. Some of the conversation also revolved around the subject of international and across-sectors collaborations in the collection of relevant data.

Besides taking part to the Digital Marketing workshop, distributors also attended Festival activities and work-in-progress sessions for both feature and documentary films, looking for new acquisitions. As partner of the Lux Film Prize, Europa Distribution members also had a dedicated meeting with the organizers of the Prize, Marisella Rossetti and Jindrich Pietras. In Karlovy Vary the Lux Prize had just announced the 10 films in its Official Selection and the meeting gave the opportunity to the distributors to discuss about how to join efforts with the Lux team in the most efficient manner to support the three films that will finally be part of the Lux Prize Competition 2019 (to be announced on July 23).

Always on the look-out for innovative ideas that can boost the commercial circulation of independent films in Europe, Europa Distribution will continue the conversation with its members and the rest of the Film Industry next month in Haugesund, and then in September in San Sebastian discussing the availability and visibility of European films online. 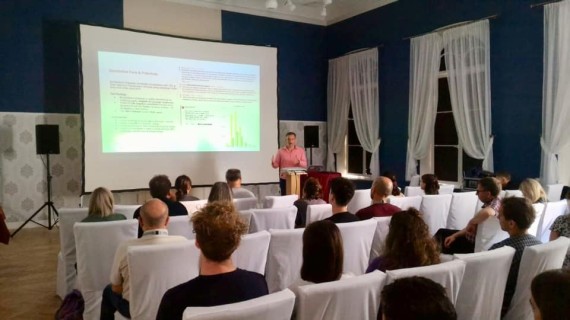