Risks or Opportunities? A look to Film Distribution today

Outside of the cinema industry there is not much awareness about the existence of a special bridge that takes a film from being made to being seen, and that bridge is called “Distribution”. So, what is it that distributors actually do? Addressing this topic on an open panel organized in partnership with the Business Street and the MIA (International Audiovisual Market) during the Rome Film Festival, Europa Distribution threw down the gauntlet, provoking a participative debate that well matched the proposal of the title: Everything You Always Wanted to Know About Distribution But Were Afraid to Ask.

The composition of the panel offered in itself a wide spectrum of what distribution is today, traveling from American independent distributor Bleecker Street Media (Kent Sanderson), to big European independents such as the Italian Lucky Red (Stefano Massenzi), to documentary focused Dogwoof based in the UK (Andy Whittaker), to Benelux Paradiso (Olivier Mortagne), to the Lithuanian Kino Pasaka (Greta Akcijonaite) and the Czech Aerofilms (Ivo Andrle), known to be one of the first European independent distributor to have built its own VOD platform. Susan Wendt, from the Danish sales company Trustnordisk, offered to the panel another angle to approach what revealed to be a rather broad topic.

Andreas Wiseman (Screen International), moderator of the panel, started the discussion with the big question, what does it mean to be a distributor today?

Distribution: A matter of passion and business

As it was pointed out by Olivier Mortagne, over the last years distribution has lost the “safety net” it had with televisions and dvd, and the financial risks taken when buying a film are harder to pay off. At the same time the number of films produced every year has exponentially grown and life of films has become consequentially much shorter. “Too many films are being made!” lamented Andy Whittaker, voicing the general frustration of distributors who fight to find an audience for their films. The strategy to approach this problem varies depending on many factors. “With Aerofilms each time we tried to pick a film only to do business it was a failure. Passion in my company is key factor, we need to love the films we pick to make them work” stated Ivo Andrle. But the CEO of Lucky Red Stefano Massenzi warned: “Our role as independent distributor is to find films that are not “obvious” but can still appeal to a relatively large audience, I don’t like talking of “niche”. We had a good “passion case” with Philomena, which was a huge hit. But it doesn’t always go like that: take Nebraska. We loved it, pushed it in any way we could, but it was a failure compared to our expectations. The truth is that passion can also be misleading, it can make you lose perspective on the real potential of a film.”

What can boost a film today?

Good reviews and festival prizes are essential to a successful release, but the role of film critics and festivals is changing. The Panel remarked a growing distance between audience and film critics, who seem more and more detached from the general public. “Opinion makers now come from elsewhere and they can be far more influential than journalists from the field” remarked Ivo Andrle. On the other side, the number of both local and international festivals is growing and festivals are now considered an alternative to traditional distribution for some titles. “With the international life of a film becoming shorter and shorter, festival often represents the occasion to show a film even to distributors. We could not translate the role of film markets on the online: you need to be there to feel the vibe, to hear the talk of the town” remarked Susan Wendt bringing in the point of view of sales agents. Kent Sanderson also pointed out that small festivals can work well to test art house films on local audiences and to boost them within the territory. According to Andy Whittaker and Stefano Massenzi, Rome represents a good occasion for the industry to meet between Cannes and Berlin: the growing importance of the MIA was recognized by all panelists. “We all do business every day but markets create a buzz and a healthy competition.”

On the role of “A” class festivals’ prizes, the discussion was quite heated. Stefano Massenzi remarked that even the Cannes Palme d’Or stops working as a marketing tool if the prize is given year after year to films not appreciated by the audience. Lucius Barre, international publicist present in the audience, added to that note that it is statistically proven that film labeled as “Cannes films” don’t do well commercially, even in France.

With the landing of Netflix in Italy midway through the Rome Film Festival, the change of scene of the VOD world was on everybody’s mind. “Sometimes I have a nightmare” – confessed Ivo Andrle – “I am at the Cannes Market and I see all the booths hanging the sign “Sold Out to Netflix”. But when awake I try to look at the bright side and I hope that the arrival of Netflix could raise awareness about the possibility of legally consuming VOD. I think it could introduce a great change of viewing habits that we could all benefit from.” While Aerofilms can count on an established VOD platform in Czech Republic, other Eastern European countries stand a few steps behind and wonder: “In Lithuania so far there is no legal VOD platform so I expect the arrival of Netflix to revolution the market overnight. To be safe I would buy for my company some shares of Netflix… just in case” joked Greta Akcijonaite. The concerns about Netflix are in fact shared by the whole film industry: “There is a risk that films bought by Netflix with worldwide licenses would not make it into theaters anymore” (Susan Wendt). Adding to that, Olivier Mortagne complained that Netflix does not pay according to the number of its viewers, as they only give the global figures, not the local ones. It is a fact that the core of Netflix catalogue is built on TV series and that films are considered gap fillers and paid accordingly. According to Stefano Massenzi, this is all a fake problem though: “Our real competitor is TV. All the talents are moving towards TV series, in Europe as in America; think of Gomorra in Italy or Les Revenants in France. Series have a way to connect to the audience completely different, which relies on time. The problem is not Netflix, it is persuading people to leave their couch”. In the US, Netflix is now old news and Kent Sanderson already points the finger towards Amazon as a provider to look closely at and to find creative way to work with.

Geo-blocking: Why do European distributors need it.

The panel had a very simple answer to this question : to exist.  “It would seem that whoever came up with the idea of a European Digital Single Market not only doesn’t know anything about film distribution, but is completely unaware of the mechanism that regulates the whole film industry. The idea of giving access to the same content to all European citizens at the same time does not take into account one problem: films would not exist if it wasn’t for the work distributors put into their promotion.” (Stefano Massenzi) The panel made a strong point on the difference between having films available on a platform and actually having the audience to know anything about them. “Also, pre-sales of art house films would be impossible if it wasn’t for territoriality. Only big mainstream products could benefit from a Digital Single Market,” remarked Susan Wendt. Stepping into the conversation, Christine Eloy from Europa Distribution reminded that the Commission would come this December with a legal proposal on portability, while cross-border access is still in discussion and fought by all the industry.“We recommend distributors and all members of the film industry to be an active part of the current debate on the DSM, this is the time to have our voice heard, otherwise decisions that profoundly affect us will be made without us” concluded Christine Eloy. 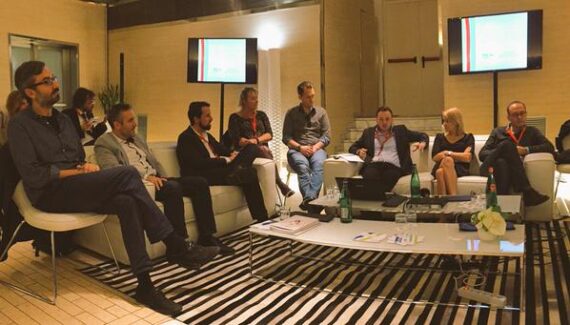