In a cinematic era dominated by nostalgia, representatives of the film industry too have sometimes the tendency of looking behind thinking “those were the days”… The golden days when independent films could count on a long theatrical exploitation, when free TVs were still buying quality content and a DVD was considered a good gift for Christmas. Within the general crisis affecting the independent cinema distribution in Europe, the collapse of the DVD market was heavily felt and VoD hasn’t come quite near to replace the revenues that used to come from those sales. Distributors struggle today more than ever to keep their films out there, existing in a market overcrowded with new titles that disappear sometimes after one weekend.

In order to tackle this issue Europa Distribution, in partnership with the San Sebastián International Film Festival, organized an Open Panel that took place on September 24 at the San Telmo Museum, to invite representatives of different parts of the value chain to discuss about the existing models and new ideas that can help films to circulate after the theatrical window.

The conversation, moderated by Europa Distribution’s Managing Director Christine Eloy, was opened by the Italian distributor Margherita Chiti (Teodora Film) who painted a rather gloomy situation of her local market. “When I started working in this business in the early 2000’s we had 6-7 figure revenues coming from home video on second exploitation and 5 figure revenues on catalogue films. Then it became all about the theatrical because TV stopped buying and now it’s theatrical that is dropping dramatically.” Chiti’s fear in the current situation is that the life cycle of arthouse films, even “big ones” such as Palme d’Or winners, will become so short that these titles will eventually become invisible for the audience. Acknowledging the changes, Teodora acquisition strategy is evolving: “I try to buy every year between 2 and 3 films that will perform well and stably in my catalogue, no matter how they do theatrically. That typically means American titles with some cast. Up to ten years ago we used to only buy what we loved but today this is no longer possible.”

While realizing that in many markets such as Italy, the presence of local VoD platforms that could turn into potential buyers for catalogue films is still limited, Wendy Bernfeld, rights management expertand founder of the Netherlands based company Rights Stuff, encouraged distributors to explore the VoD landscape beyond their region. “What I can see on a global level is a huge demand for arthouse, festival and foreign language films. Stand alone SVoD [platforms not attached to a Pay-TV, ed]are interested in working with films that can help them to offer a counter-programming to the average Netflix offer. What works better when partnering up with them is to create some sort of curated package that can bring back old films that can be attached to newer films coming up.”

Backing up Bernfeld’s comments on the actual demand of arthouse films on VoD platforms, William Page, co-founder of the UK based platform FilmDoo and representative of the association of European VoD platforms EuroVod, insisted on the necessity of closer collaboration between VoD platforms and distributors.  According to Page, VoD is still a market in its infancy and he reminded that setting up a VoD platform is very expensive as it takes a big technological investment, without considering paying for rights and marketing. “VoD platforms need strong curation. Platforms tend to avoid labels such as “documentary” or “arthouse”, preferring a more thematic approach that is less likely to alienate the audience. We notice that the most efficient partnerships between VoD platforms and distributors happen around specific niches films that appeal to a specific audience, such as LGBT titles”.

The need to create stronger collaborations across the value chain was stressed several times by the speakers, and both Joséphine Létang (La Toile) and Anke Van Diejen(Picl) addressed this topic specifically, discussing local models of collaborations between VoD platforms and cinema theatres.

Joséphine Létang, who founded the French TVoD platform La Toile in 2017, explained that she started with a simple reasoning: “People might not know what a VoD platform is but they know – and trust – the cinema theatre around the corner.”  La Toile started with 5 cinema theatres, each curating its own page on the platform, and has now 40 cinemas participating on a revenue share model. Cinemas promote the platform getting a share of the transactions. La Toile chooses each month catalogue films thematically related to new releases screened by the partner cinemas, building up a catalogue of films that remain available on the platform also after the films are no longer promoted on the home pages.

The Dutch platform Picl, also works on revenue share with cinemas but instead of working only on catalogue films, it also proposes premium content trying to reach an audience who wants to watch the newest films but for several reasons doesn’t go to the cinema. Anke Van Diejen explained: “We charge as much as €8,50 per film, which is not far from the cinema ticket prize, and this helps the cinemas to reach an additional audience, like parents for example.” Through the data collected, both in the cinemas and on the platform, Picl is also able to propose “similar titles” to the audience visiting the platform.

Europa Distribution members continued the discussion about the topic during two closed workshop sessions where distributors Barbara Dias (Curzon Artificial Eye), Eduardo Escudero (A Contracorriente, ES), Anna Harding (Folkets Bio, SE), Karoline Mennecken (Prokino, DE), Fredrik Scholze (Arthaus, NO) and Adriënne Van den Berg (Cinemien, NL) also shared their experience regarding the exploitation of catalogue titles through the analysis of concrete examples and case studies. From both the Panel and the workshop sessions, it clearly emerged that on one side the VoD market is not travelling everywhere at the same speed, and that in most territories the gap left open from TV and DVD sales drop will not be covered in the immediate future, but on the other it seemed also clear there are different models that are emerging and that cross-sectors collaboration is one of the key elements for successfully travelling (back) to the future.

Sharing, learning and… hoping! were the three key words that echoed most during Europa Distribution’s activities in San Sebastian and the association will continue the conversation with other parts of the Film Industry at the MIA market in Rome with an Open Panel on Blockchain and then in November in Amsterdam at the IDFA to discuss about documentaries’ releases. Stay tuned and #LetsTalk. 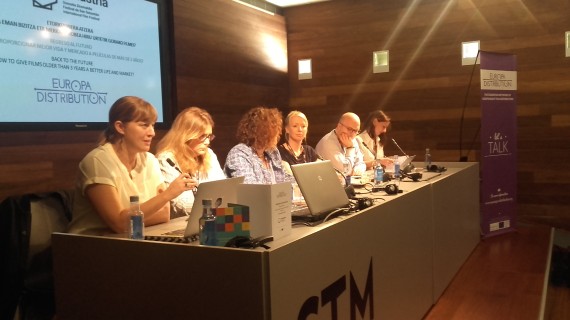