Crises are always accelerators for change and in today’s pandemic the independent distributors are fighting hard to be ahead of that change, to save their companies and to guarantee the circulation of the films they are passionate about.

To raise awareness on the role of distributors in film industry Europa Distribution, in partnership with the MIA Market, organized in Rome a panel gathering together distributors coming from countries where the Covid situation was handled in very different ways: Margherita Chiti (Teodora Film, Italy), Oscar Eriksson (Folkets Bio, Sweden), Ira Von Gienanth (Prokino, Germany) and Huub Roelvink, (Cherry Pickers, Netherlands). The chair of the panel Michael Gubbins introduced the discussion with a provocation: would the role of distributors be better understood if they called themselves “publishers” instead?

“At Teodora the transition from distribution to publishing was already in motion,” – explains Margherita Chiti – “and Covid exasperated a situation that was already critical”. Italy was the first country to reinforce a rigid lockdown and over the past 8 months the theatrical, that normally represent around 50% of revenues for indie distributors, dropped over 70%. “We decided we would keep our films for cinemas instead of trying to release them straight to VoD, to keep the whole chain alive. When cinemas took the risk of reopening, we gave them our films even though attendance was, and still is, much reduced. It was a shared risk. In August, after 6 months where me and my three other partners were going without our salaries to keep the cooperative alive, we took on the challenge to put Emma Dante’s The Macaluso Sisters in Competition in Venice and we released it on the same day working with a drastically reduced P&A and focusing all our energy on the curation. We made over 60.000 admissions, a result we would have appreciated even in a Covid-free period. Just like book publishers we handle cultural products and the key to our success lies more and more in curation.”

In Italy some Covid emergency funding was put in place for exhibitors but distributors releasing non-Italian films can’t not yet rely on public support. In the Netherlands film funds focused their efforts mainly on supporting local productions while most exhibitors traditionally involved in arthouse cinemas were trying to attract audiences back to cinemas by screening Tenet and more commercial titles. “Although of course we understand the struggle cinemas are going through, I would have hoped to find more solidarity across the sectors” commented Huub Roelvink whose company suffered a loss of around 50% revenues compared to last year. During the cinemas’ shutdown, VoD releases proved to be very a poor substitute, bringing less than 5% of the normal theatrical revenues.

Echoing a shared feeling in the industry, Ira Von Gienanth pointed out that confusion and uncertainty are proving to be the worst enemies to fight during this Covid crisis. In Germany the policy for social distancing imposes 1,5 meters all around, which means cinemas’ capacity is currently reduced to 20-30% but as such measures continue to vary, exhibitors struggle to clearly communicate to the audience and to plan ahead. A common and very serious problem that distributors are having across Europe is the lack of clear communications at national level on the fact, proved by studies and numbers, that cinemas are safe places to be. Public campaigns promoting cinemas would be beneficial for the whole sector.

Von Gienanth explained that out of the seven films Prokino was supposed to release this year, two were pushed to 2021. On these dire times she is betting on audience appetite for arthouse comedies. For Prokino this year’s success came from the French-Tunisian comedy Un divan à Tunis by Manèle Labidi Labbé.

Sweden was among the few countries that didn’t impose a full lockdown but only restrictions based on social distancing. The limitation of cinemas’ capacity to 50 people per screening contributed in giving people more confidence to go the cinemas while public support measures were promptly activated to compensate losses. But not even Sweden is paradise. “Here 70% of cinemas are owned by one company focused on commercial films and therefore the capacity’s reduction translated immediately in a scarcity of screens for arthouse films” commented Oscar Eriksson whose main concern is the high number of films still being released every week competing for fewer screens and fewer admissions. “We are collaborating with the Swedish platform Drakenfilm and believe that VoD can become an excellent complementary tool, it’s great for curation, but in terms of economy it is no substitute to a theatrical release”.

Panellists all invoked a stronger response from state funds, both local and European, to face the crisis. The discussion about the future needs now to bring together all parts of the film value chain and distribution needs to be supported just as production and exhibition to guarantee that arthouse films continue to exist for an audience. Distributors are the ones backing culturally important work at their own risk, while always having in mind their responsibility towards the audience and their role within the film industry. It’s essential that film funds support distributors’ job of publishers with flexible schemes that can allow them to adapt to a new market and develop their curatorial activity that goes beyond P&A. In order to move forward, today the industry needs to move together.

Géraldine Imbert-Cléry presented the Moonday App created in 2019 by former film distributor and producer Olivier Bronckart to help distributors to find in one place all the information they need on the new films in the market with updates on rights availability and contact details. Besides serving as database, Moonday proposes several tools to manage daily tasks such as prospecting, exchanging information with teams and partners.

Looking at recent data Mikkel Bay, Digital Marketing Campaigns Manager from GRUVI showed that appetite for films was still there during the lockdown. Discussing the details for online campaigns across multiple territories for Sciamma’s Portrait of a Lady on Fire and Murphy’s Babyteeth Bay stressed the importance of testing and analysing consumers’ behaviour to optimise the ad-spend and find early on in the campaign the right audience to address.

For many participants the MIA was the first occasion to finally get together live and do business. Members of Europa Distribution took this opportunity to discuss their situations and look for the best routes to navigate in these uncertain times. They have continued throughout the Covid crisis and continue today to take risks in releasing bold, innovative and thought-provoking films. Foreign films that an algorithm might never propose to its costumer.

Click here to see the recording of our Panel. 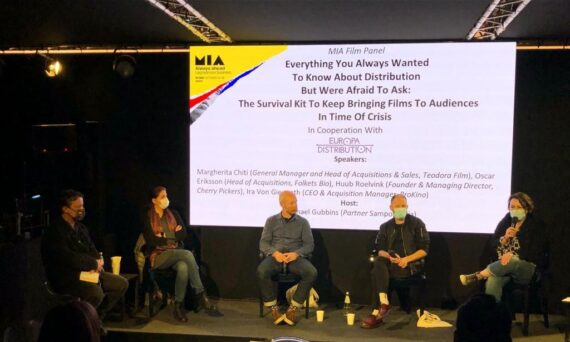