Alessandro Giacobbe, Managing Director of Italy’s Academy Two, broke down for us the main challenges for independent distributors in Italy, such as the difficult access to the screens. Cinemas across the country were reopened in mid-June, but when the market was slowly recovering after summer, the government declared a second lockdown on October 26 to contain the pandemic. In the meantime, Italian distributors have been promised specific support for their losses over this period, but the conditions and the amounts are still to be confirmed.

What is your company’s editorial policy and how did it come to be?

Academy Two was established only 8 years ago, but we are proud to say that we have achieved quite good results so far. Our latest success was Parasite (Bong Joon-ho, 2019), which is a good example of our editorial policy. We are always looking for unusual things, and this has been our main target from the beginning. We compete in a tough market, with big distribution companies which have been operating for a long time. Somehow, we took inspiration from some of them. Over the years, these companies kept growing and started acquiring bigger films and more mainstream titles, so we realised there was a niche available for smaller films. We have been trying to fill that empty space, focusing on arthouse films, particularly European productions. However, in the past few years, we have also successfully included films from other countries: we have been distributors for Russia’s Andrey Zvyagintsev, both Leviathan (2014) and Loveless (2017), as well as Aleksandr Sokurov’s Francofonia (2015). We have also released a few Iranian and Saudi Arabian titles, such as Wadjda (2012) by Haifaa al-Mansour.

Are you exploring any other lines of work?

Actually, both me and my partner in Academy Two come from the exhibition business, and we are still running a few cinemas in different towns. We are also considering stepping into production in the future. It is not an easy field, but we might start by joining some Italian co-productions. We can’t start directly a production branch because it requires quite a different organisation compared to our current structure. We are still a small company, only 7-8 people altogether, so it is not enough to build up a real production company together with the distribution business.

You’ve mentioned the Italian market is a tough one. What would you say are the main challenges you have to face?

The main problem in Italy is the access to the screens. The two biggest groups (UCI and The Space Cinema) control close to 50% of the market, and they rarely release our titles. In the past, there was an agreement between UniFrance and the UCI group for the release of French films. It involved a limited number of screens within UCI complexes, not more than 10 or 15 all over the country, and UniFrance was supporting the releases by paying some promotional costs. In the end, it was not profitable for anybody, because the usual audience of these multiplexes is still very reluctant to watch European arthouse movies.

The rest of the exhibition market in Italy is very fragmented, in the hands of local players. You need to work with regional agencies representing distribution companies in the country, which are controlling the relationship between distributors and local exhibitors. I believe this is something very particular to Italy, which I don’t think applies to many other countries. We have the possibility to enter in a direct relationship with a few exhibitors, mainly those who are interested in arthouse movies. Still, we have this “bottleneck” of local agencies which operate according to some political strategies which have nothing or very little to do with the quality of the films. From a commercial point of view, they will always give priority either to big blockbusters or to independent companies able to feed them more regularly during the year.

How do you manage to release your films in such a landscape?

It’s quite a complicated situation, which is leading to a very unusual practice where smaller independent distributors have to make agreements with bigger companies for the release of their films. That’s what happened to us with Parasite. Even though we had all rights, in order to access a reasonable number of screens we decided to make an agreement with Lucky Red, a well- known Italian distributor, which was able to place the movie in a much higher number of cinemas. The deal has been successful for both parties and we are happy with the box office result, although the procedure is somehow driven by the unfair market structure.

What do you think is the added value of your job as a distributor when it comes to the circulation of European films?

Unfortunately, European movies have quite a limited audience in Italy, and it is mainly concentrated in big towns. You cannot have access to them in other areas of the country for the reasons explained before. The most frequent comment we get on social media from our followers is: “I would love to see this movie, but I know it will never reach our local cinema”. Therefore, when we pick movies from markets, we have to be very careful, because we can only consider those titles which can reach a reasonable audience in bigger towns. This is the only target we can count on to make a profit. Even considering the subsidies available for European distribution, such as the MEDIA Programme distribution schemes, it would not be sufficient unless we can release the movie properly. This is a big obstacle for the circulation of smaller films.

In my opinion, to release a good European movie in Italy is already a success. Regardless of the financial outcome. We always hope our passion for the films we release is shared by a large number of people in the country. Sometimes we are happy to see that our choices are appreciated, and sometimes we understand that these may be a bit too difficult for a large audience. This is another challenge we are facing: the film education of the audience, especially younger people. We have been working with schools for some years now, trying to bring students to watch independent movies in cinemas, to spark their curiosity, although we are suffering a period during which it is almost impossible to achieve this target due to Covid-19 restrictions.

What is the situation in Italy at the moment with the pandemic? Were there any specific measures put in place to help distributors in this period?

We had been allowed to reopen cinemas in mid-June, but in summer there is no real market for our business. We were step by step trying to recover in September, but then we were closed again at the end of October. We have been in a new lockdown for a couple of weeks now and we don’t know if we will be able to open again before Christmas.

As far as distribution is concerned, there has been very little support so far. There is a plan to give some non-repayable grants to distribution companies, but it is still a big question how to calculate the amounts. For exhibitors, it has been quite easy. The government considered the box office income from 2019 and compared it with the results during the lockdown. With distribution, it would be difficult to judge with the same procedure, because our activity is so that this year we might be having benefits from the films we sold to TVs and platforms last year. Even a comparison of the box office would not be easy because some companies have been unable to release any films at all, and others have released just a few titles with very negative results. It is not a homogeneous landscape, so at the moment we don’t know if and how we will get support or compensation for these terrible times.

In a normal situation, what would be the usual split of income for the different revenue streams?

With few exceptions, arthouse titles are still getting their main revenue from theatrical. We don’t have any output deal with broadcasters, so when we buy a film we have to build our business plan on the possible theatrical income. Whatever is coming afterwards is welcomed, but it is not something on which we can count. Theatrical is by far the main portion of the cake. Home Video (DVD) is declining every year, while the digital market is still very weak for arthouse movies. We are not getting big results from platforms at the moment. On the other hand, when an arthouse movie has a reasonable success in theatres, we are stimulating the interest of the broadcasters, so at that stage, we are able to sell our movies to TV. On average, I would say 70% comes from theatrical, maybe 10% from DVD and platforms (VOD-SVOD) and the other 20% from TV sales.

Another big obstacle we have in Italy is the dubbing. It is still a must if you want to have a wide release on different windows. The Italian audience is not used to subtitles, and dubbing is very expensive. We are normally paying not less than 20k for a good dubbing, which is really cutting your legs and forcing you to give up on some good films.

What has been the most successful campaign for a European film that you had in the past? What was its secret ingredient?

We were delighted by the success of a couple of French movies: Frantz (François Ozon, 2016) and L’Hermine (Christian Vincent, 2015). Both of them were very successful with our audience, reaching around 100k admissions in the whole country, which for an arthouse movie is not bad at all. I would say we had a somehow “typical” campaign in both cases. We brought the director and main actor for their respective premieres, which took place at Nanni Moretti’s cinema in Rome (Cinema Nuovo Sacher), where they were welcomed by Moretti himself. That was something very important in terms of press coverage, which helped a lot with the promotion of the movie.

On a different scale, we are also very proud of the success we had with the French documentary On the Way to School (Pascal Plisson, 2013), which we acquired particularly for the school audience. We organised a very big campaign throughout Italy, talking to thousands of teachers all over the country. We were able to bring roughly 150k students to the cinemas, so we were very happy.

How did you start working in film distribution?

It started as a hobby. When I was 15, I used to organise screenings in my lyceum once a week, so it has always been something in my heart. Only later it became my main activity. For many years, my main job was completely different. I was involved in sea shipping activities, and step by step I managed to put some money aside and started running theatres in Genova. I think that any exhibitor in his heart would like to become a distributor. You start attending festivals and markets, then you try to move forward and buy rights for films, in order to screen them in your cinemas but also to offer them to your colleagues. It was quite a natural development for me.

How do you see the future?

I have to be optimistic. My main concern is that, altogether, between the cinemas in Genova and the distribution company, we have more than 40 employees. We have to think about the future of all those families. Let’s hope we can get over this period. We have very good films ready to be released when cinemas reopen, such as Persian Lessons (Vadim Perelman, 2020), My Salinger Year (Philippe Falardeau, 2020), Minari (Lee Isaac Chung, 2020), or Summer of 85 (François Ozon, 2020). We just have to wait and try to be optimistic because the material is there, ready to bring people back to the cinemas. 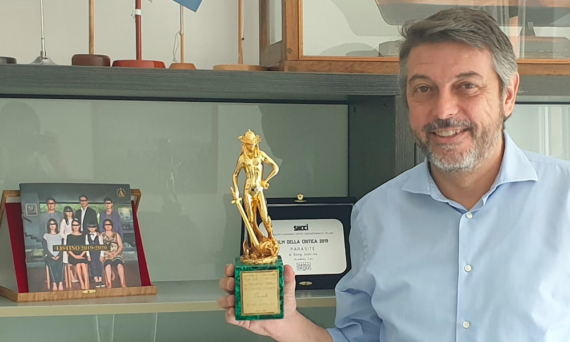