We chatted with Antoine Zeind, founder and CEO of Montreal-based A-Z Films, to discuss the challenges of releasing European and foreign-language films in Canada. In a market particularly dominated by Hollywood productions, independent distributors struggle to find enough screens for their titles. In the meantime, the effect of the COVID pandemic and the latest decisions by major platforms have opened the door to an uncertain future for the market.

What are your editorial policy and your strategy for acquisitions?

We try to buy the best movies from all over the world, both commercial and arthouse titles. Over the past few years, we had big European films like the Spanish Living is easy with eyes closed (David Trueba, 2013), shortlisted for the Oscars, or Marshland (Alberto Rodriguez, 2014). More recently, we acquired titles such as God exists, her name is Petrunya (Teona Strugar Mitevska, 2019) or the French Papicha (Mounia Meddour, 2019). We always try to choose films that we think will be interesting for Canadian audiences to watch on the big screen. We aim to release our titles across the whole country, but we work mainly in Quebec. If a foreign film doesn’t work here, it is very tough to release it anywhere else in Canada.

How is the landscape for independent film distribution in your country?

In terms of finding enough screens for our titles and competing with Hollywood productions, I would say in Canada it is three times more difficult than in Europe, because we are so close to the United States. The majors control almost all the screens, so for a foreign-language movie we might have only 10 prints for the whole of Quebec. It is extremely difficult to convince people to watch foreign-language films with subtitles, and TV is not buying anymore. For the past 10 years, they decided to stop buying movies which are not dubbed, so this is not helping the market. Dubbing a film costs a lot of money, so we only do it when TV is really interested in them. Of course, it is also about the prestige of the film. If a movie wins in Cannes, receives national awards or gets nominated for the Oscars, all these help a lot. It is more difficult when a movie doesn’t get any recognition, unless it is extremely commercial.

What was the effect of the pandemic for the industry? What kind of measures do you think should be implemented to help distributors in the current situation?

It is very tough for everyone in the industry. As a distributor, I don’t have any revenue since March. Exhibitors don’t have any films to show, so a lot of cinemas decided to stay close and wait for the big Hollywood blockbusters like Tenet (Christopher Nolan, 2020). Cinemas started reopening in Quebec on July 3, with a limitation of 50 people per room. On August 4, it went up to 250 people, under the condition of being two meters apart from each other. People are still afraid, and if we don’t find the vaccine soon it is going to be extremely difficult. I don’t even know if everybody will survive in the industry. However, we have to stay positive. When we reopened on July 3, we had a few people coming back to the cinemas, and it has been increasing since then.

As for the measures, the government launched some state support for distributors, especially for those with Canadian and Quebec titles. Exhibitors did not receive any support yet, but they are working on it. Let’s say the government didn’t forget us. They opened new funds to help us with foreign movies as well, so they are doing the best they can.

How are you managing with new releases and acquisitions? What is the situation at the moment?

We are trying to release a new title every two weeks, in order to help exhibitors. Are we losing money? Yes, but we have to think about the long term. They have always been there for me, and if they close, I will lose a source of revenue for life. Right before the pandemic, on March 12, we released Docteur? (Tristan Séguéla, 2019). It was in the theatres just for one day before the lockdown, but I didn’t panic. Instead of going on VOD, I kept the movie and released it again when cinemas reopened. I had to respect my windows of 90 days for VOD, so I decided to count from July, instead of March. As I said, it’s teamwork. I’m one of the strongest independent distributors in Quebec and I try to do my part.

What are the numbers compared to a normal situation? What are the expectations for the upcoming months?

Talking about the market as a whole, we had a 90% drop compared to the same period last year. We are going to have a better picture at the end of August, after the release of Tenet. Usually, with big movies like that, if we have a 50% limited capacity in theatres, we should do 50% at the box office. If it stays around 25%, it means we are not going to recover soon.

What is the usual repartition of income between the different windows for your releases? How is it evolving?

I would say about 10% for TV, another 10% for VOD and 80% for theatrical. For a subtitled movie, TV can be zero and VOD less than 5%. If we dub the films we can make double on TV and VOD. With French movies it is easier, because we don’t need dubbing so TV could go up to 20%. Years ago, theatrical didn’t cover all the expenses for a film release, so the DVD and TV market would bring a big part of the revenue. We don’t have DVDs anymore, and VOD didn’t manage to fill the gap, so now theatrical has to cover all the costs, including the MGs. It is becoming more and more difficult.

What has been your most successful promotional campaign for a European film? What was the secret ingredient?

We had Serial (Bad) Weddings (Philippe de Chauveron, 2014), which was our biggest success in 21 years. We invested a lot in P&A for the release, and the movie made more than 1 million dollars in Quebec, which is a lot for our standards, especially for a European title. We worked with the director, who came to Montreal for the premiere. I tried to invite the actors as well, but it was such a huge success that they were extremely busy with the promotion in Europe. It made more than 12 million admissions in France, so this helped a lot. Everybody was waiting for the movie. It was a well-written comedy dealing with an important topic such as racism, so it managed to connect with everybody.

On a personal note, what brought you to distribution and how should tomorrow look like in your opinion?

My grandfather was an exhibitor in Egypt, so I grew up going to the movies. When I moved to Canada in the 90s, I did my Bachelor and Master degrees in film studies at the University of Montreal. Later on, I wrote, produced and directed three short movies and founded the International Comedy Film Festival, which I run for three years. After that, I worked for some distribution companies before founding A-Z Films in 1998. Now I travel around the world to attend film festivals and markets, trying to buy the best films for my audience.

As for the future, I believe that what happened with Mulan (Niki Caro, 2020) this year, which is going directly on SVOD, will open a new door that will hurt distributors and exhibitors. All the majors are going to look at the numbers of Mulan and think about the possibilities. However, I believe that for my product, as an independent distributor, it won’t hurt us as much. The only problem we might have is if the producers, in order to be able to make movies faster, decide to go straight to the big platforms. Nevertheless, I still believe all directors want to release their films on the big screen, so cinemas will always be here. 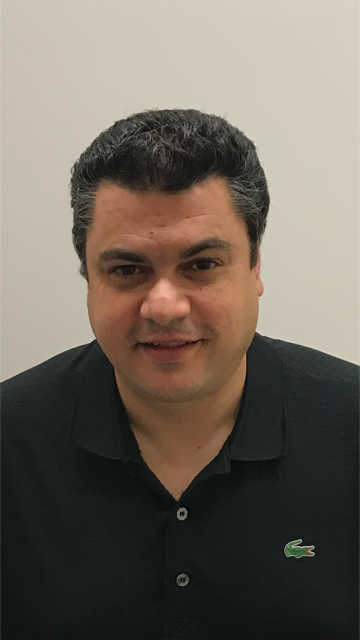