We talked with Christian Thomas, CEO of Imagine Film about both Belgian and Dutch markets in times of the pandemic and the measures put in place in both countries. The lockdown and the rise of online platforms could have signed the death warrant for theatres, it proves above all the absolute necessity of the work of the distributor as publisher and of keeping theatres alive.

What is Imagine Films’ editorial line?

It is clearly a line-up of art house films, auteur films, with the occasional so-called crossover, films with greater potential. We distribute twelve films a year, including one or two Belgian films.

The choice of film is closely linked to our personalities. The whole team is involved in acquisitions. Sometimes we miss films that have potential but we do not want to distribute because we are not interested: there must be a real enthusiasm shared by the team. It’s not a system in which I’m the one who buys and imposes, it’s very horizontal, and we take into consideration each other’s advice.

There are also directors whom we follow, and whose films we take because we like working with them, even if the film is not as good as we had hoped, we tell ourselves that he will make another one: it’s about following a talent.

What are the particularities of the Belgian and Dutch markets?

They are two very different markets. The Belgian market is dominated by multiplexes, whereas in the Netherlands, there are many more small theatres in city centres. This is more favourable to art house films and there is a more mature audience too. We systematically make better figures in the Netherlands, except for Belgian or French-language films. The French-speaking Belgian market relies heavily on French films and France’s influence. Brussels represents at least 40% of the market in Belgium, whereas Amsterdam has absolutely no such position: it is spread over the entire territory.

In terms of acquisitions, we always try to have films that work on both sides. Sometimes we pick a film knowing that it is likely to perform better in one territory than in the other.

How do you see the work of a distributor?

I very much like the idea that parts of French distributors have brought, to change the name of the profession to publisher. We completely agree with the concept. We make a choice based on what we want to show. The commercial aspect comes into play, but it is not our primary goal. We want our choices to be profitable so that we can run the structure, and yet we have refused some profitable projects because the films did not convince us. Then, we don’t always have the films we dream of having: some are too expensive for us, where the seller asks for a price that represents too much of a high risk.

What is the added value of the distributor’s work for the circulation of European films?

What the COVID-19 crisis teaches us is that there is an incredible flow of films available on all platforms. But I think that too many offers kill the offer. People need upstream work so that they know what to see because they hear about it and its topics. And that’s where we come in. We give an added value. I think that this is where we will survive as distributors, bringing this extra dimension. A distributor who is content to pass the dishes around and do a little of marketing will disappear. Commercial products work on their own. A James Bond film, we know what it is, and a French comedy with Christian Clavier too. But auteur cinema is about films that are not ready-made products and do not use recipes: each film is different and therefore requires support and promotion, otherwise it disappears.

If I can send a message, it is that the role of distributor-publisher will become increasingly essential to the survival of a certain type of cinema.

Do you have an example of a campaign that highlights this work?

Some films have a list of prizes but nobody goes to see them. Why is that? Even though we say they are great, people don’t want to see them. Our role is to explore this path, to find out with each film, whether people will want to see it and why. That is where we start to work: if we think people want to see the film, we must convince them, make them hear that they want to see this film for different reasons.

Let’s take a recent example, this year our biggest success is Corpus Christi (Jan Komasa, 2019). The seller, with whom we have a good collaboration, had told us about the pitch. We bought it at a reasonable price and then we saw the film just finished, each of us on our own. After that, we called each other and realised that we all loved the film. But it’s still a low-budget film from Poland, with an unknown cast, an unknown director, and with violence… We know we have a strong film, but will it please the audience?

We take the film, we feed it like a little plant, we invest and we believe in it, we show it, and we see that the reactions are positive. There is an appealing poster, a trailer and journalists love the film. We bombard social networks with short videos. But then comes March’s lockdown, the release has to be postponed, and we tell ourselves that it’s all over. After that, we receive the Selective aid from MEDIA, which changes everything. We release the film in October in Belgium and in November in the Netherlands. And despite the limited cinema capacity, the film has incredibility 40,000 admissions in the Netherlands. In terms of admissions and return on investment, this “small” film is our biggest success of the year.

What is the repartition of income between the different exhibition windows? How is the situation evolving?

In the Benelux, 60-65% comes from theatrical, 20-25% from TV and 15-20% from VOD and video combined. We have had experience with premium VOD, which produces interesting figures, yet marginal compared to theatres’ figures. This confirms that our films are made for the theatre. Perhaps we will reach 15% for VOD, but it will not become 40% theatre and 40% VOD. Despite the fact that we are in a context where only this offer is available.

We can feel people’s need to go and see films in theatres. Hence, I am confident and not worried for the long-term, neither about what we do, nor our choices, nor our economic model. It has been shown that we have a place in the market. And even though, the general attendance of the theatres will fall and will not rise again, there will be fewer spectators lost in the arthouse sector than in commercial cinema.

Concerning the Covid-19 crisis, what has been put in place by governments in terms of specific aid measures for distributors?

In the Netherlands, cinemas closed in March, reopened in June, then closed at the beginning of November for a fortnight and stayed open for almost one month; however since this week cinemas are closed again. In Belgium, the situation has been similar: with cinemas’ closures from March to July, then closed again in October and now scheduled to reopen mid-January.

Regarding the aid, it has been of an economic nature in the Netherlands: employment support for companies from which we benefited a little.

In Belgium, we had a temporary unemployment scheme. A general measure that allowed some of our employees to work sometimes two or three days a week and to adapt to the situation each time. There were also small regional bonuses. For example, the Federation Wallonia-Brussels has set up several types of exceptional aid. Firstly, there was Selective aid for the release of films in July and August, to relaunch film activity. They helped the theatres and helped us as distributors to cover part of the new P&A costs. This encouraged us to release 3 films, that we wouldn’t have known how to do it otherwise, and things have picked up well. They also bought 20,000 cinema tickets. These tickets were sold 1 euro to spectators, then valued at full price at the cinema, with the Ministry paying the difference. It was a good incentive to bring people back to the theatres and I hope they will do it again when the cinemas will reopen. The third measure is the COVID emergency fund for cultural companies, based on a file showing losses and shortfalls. All in all, we have been well supported and we’re getting through it. We are also fortunate to have had selective MEDIA support for three films this year. The films should have done better, there is still a shortfall, but we have been able to keep our heads above water thanks to all these supports.

What is the outlook for the distribution of European films?

Not every distributor will have the same strategy. We are cautious. We have had difficult moments in the past following costly acquisitions that did not arouse the enthusiasm we had hoped for. Although the sales agents haven’t lowered their asking prices, we notice that other distributors are still buying at high prices and the competition is still there.

We are on standby: we have five films to release in 2021, of which three should have been released in 2020, and we are waiting to be able to decide on the dates. On the other hand, we have been very cautious about acquisitions, we cannot buy films without a clearer view of the market and the recovery. We will have to buy films for the second half of 2021, but for the moment we have enough to work on until the summer.

I am convinced there is a demand for quality arthouse films. The challenge for European films is to keep a substantial share of that market; in 2019, the two most successful arthouse films were Parasite (Bong Joon Ho, 2019), from South Korea, and Joker (Todd Phillips, 2019), from the US… The year before there was Roma (Alfonso Cuarón, 2018), a Mexican film produced by Netflix. For sure, they represent serious challenges for European cinema…

What led you to become a distributor?

I studied art history in Brussels and went on to study film in Los Angeles, then I became director of the Brussels Film Festival from 1990 to 2001. When I resigned, a Belgian producer told me that he had films to release and that he wanted me to handle distribution. After a few years, a few successes and a first Palme d’Or, with 4 Months, 3 Weeks and 2 Days (Cristian Mungiu, 2007), I understood that there was a place in the market for Imagine Film.

From a personal point of view, I found my driving force when I was in charge of the festival: the idea of being a publisher, a curator, a link between creators and their public. It’s the same approach, even though the economic constraints are much stronger.

I would really like to insist on the absolute necessity of the European support that exists: it should not be called into question. There is a real need and a real meaning to the distribution of independent films and there is an audience. But the economic reality is difficult and without support, this year we would no longer be here. And yet we have successes to our credit. It is fundamental that this support continues to exist if we wish to preserve cultural diversity, as well as a production economy and the know-how of all professionals who make these films in Europe. These films are made and people need to see them. Hence, we are an indispensable link, and we are going to become more and more so. 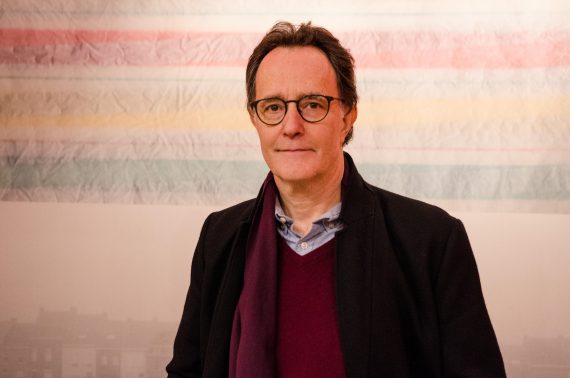