We spoke to Hans König, Head of Distribution at Polyfilm, who shared with us some of the main traits of the Austrian market for independent film distribution, such as the strong connection with Germany and the necessity to rely almost exclusively on theatrical distribution. In order to tackle the effects of the COVID pandemic, Polyfilm decided to increase their stream of releases after the lockdown, while focusing on smaller titles and documentaries.

How would you describe your editorial policy and strategy for acquisitions?

We are basically distributors for arthouse films, but we also acquire some commercial titles. We are releasing approximately 35-40 films every year, and our selection is based on two criteria: the quality of the films and the audience potential. We also run two of the most important arthouse cinemas in Vienna: Filmcasino and Filmhaus. The company actually started in the exhibition business, and later expanded to distribution.

What are the main challenges of the Austrian market when it comes to independent distribution?

The main particularity is our connection with the German market. There are two big challenges related to this: first of all, we have the tradition of dubbing films into German, and we can’t afford it only for Austria, so we are dependent on German distributors for bigger films. Secondly, we have to concentrate on theatrical distribution, because home entertainment rights aren’t exclusive to Austria anymore. DVDs published in Germany can be legally sold and distributed in Austria without owning the Austrian rights. And for VOD, it is a very complex situation because big platforms only accept one licence for Germany and Austria, instead of one for each territory, which makes things very difficult. Often, the only option for us is to buy films directly from German distributors because there are a lot of sales companies that only sell Austrian rights together with the German ones. Only for domestic titles we have home entertainment rights, which means we have to live basically from the theatrical revenues, forcing us to distribute more films than other companies.

How did the health crisis affect your releases? What was your strategy after cinemas reopened in your country?

We started releasing at the beginning of July, as soon as some cinemas reopened. Most of these titles we bought before the lockdown, and we couldn’t postpone them anymore because we depend on the German distributors. If they decide to release a film, then we have to do it as well, because of the protection windows for home entertainment and TV. We released Undine (Christian Petzold, 2020) on July 1, which was a very big success with 6,500 admissions, together with other titles like A Bigger World (Fabienne Berthaud, 2019) and And Then We danced (Levan Akin, 2019). In the current situation, the potential of these titles is just 30-40% of what it would be in a normal year, so I’m afraid we paid too much for them…

What kind of films are you acquiring now and what are your expectations? How is the audience reacting?

Now we have acquired a lot of smaller films and documentaries, and we plan to release them in autumn. Things are getting really difficult for us. We are actually living on our savings, but these won’t last forever. We are working mostly with small films, because we can’t pay as much as before, and we don’t get any support for them.

As for the audience, we noticed that people are coming back to our cinemas in Vienna. We organised a lot of special events (such as ‘Pride Special’, for queer films, or ‘Latin Film Lounge’, with films from Latin America) and screenings of classic films after the lockdown, and we actually had more admissions in July and August than last year. However, it doesn’t look that good for other cinemas in Austria and also the prospects for our cinemas don’t look promising for autumn and winter.

Did you receive any state support during these months?

We only received the general support for all Austrian companies. As long our cinemas were closed, our employees could work only 10% of their usual work schedule, and they got 80-90% of their salaries from the state. As exhibitors, we did get some support for the rental costs, but we didn’t get increased funding as other Austrian arthouse cinemas did. The city of Vienna let us down because they own their own theatres. Arthouse cinemas in Austria are mainly funded by the federal states and the cities…

You already mentioned the limited windows for distribution in Austria. What is the usual split of income for the different revenue streams for your films?

For most of our films, 100% of the revenue comes from theatrical. When it comes to domestic films, we also have VOD, which represents less than 5%, but we don’t have TV rights because the Austrian TV co-produces national titles, so they keep those rights. We used to have our own DVD distribution branch, but we stopped years ago. It is basically the same for everyone in Austria. Major independent players such as Constantin Film have a lot of output deals with Paramount, or with bigger German distributors like Leonine, but even then, they have only theatrical rights.

What was your most successful campaign for a European film? What kind of tools do you focus on when promoting your titles?

Before the crisis, we were very successful with titles such as Cold War (Pawel Pawlikowski, 2018), Woman at War (Benedikt Erlingsson, 2018) or the Austrian film The Best of All Worlds (Adrian Goiginger, 2017). We focus on social media promotion, and we try to have the director or the film crew with us in Austria for the premiere. The press campaign is also really important for us, but we don’t spend much money on traditional advertising anymore. For some films which don’t have a German distributor, as well as for domestic titles, we create our own promotional materials, but most of the time we use the German ones. Otherwise, it wouldn’t be possible for us to release close to 40 films every year.

What brought you to distribution? How do you see the future of the sector?

I began working as a film critic and eventually got into exhibition. Later on, we decided to start our own distribution company, because we didn’t want to depend on other Austrian distributors to acquire films for our cinemas.

As for the future, I’m not really pessimistic. I think cinema will survive, despite the crisis and the success of the streaming platforms. Maybe I’m wrong, but I’m not really afraid. Cinema has such magic and connection with the audience… I don’t think home entertainment will take over anytime soon. I believe cinema will keep its place. 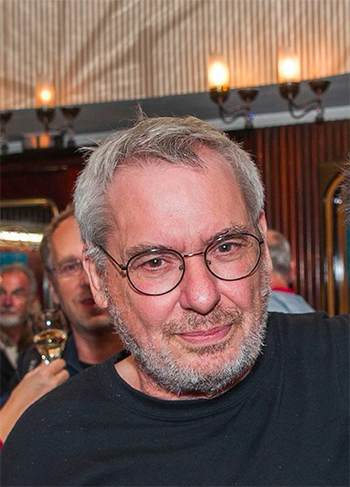