After facing permanent closure due to the high costs of maintenance necessary for the running of its operations, Iceland’s only arthouse cinema Bíó Paradís announced it would reopen again this September following a successful agreement with public officials. We spoke to Hrönn Sveinsdóttir, Managing Director of the cinema and its distribution company, about their current situation and the many challenges for independent film distribution in Iceland.

How did Bíó Paradís come about and what is your editorial policy?

Bíó Paradís is the first and only arthouse cinema in Iceland. It was founded in 2010 to serve film culture and film education in the country. During the first few years, we struggled a lot in terms of reaching an audience, because we didn’t have access to the kind of films we wanted to show. We focus on international award-winning films, particularly European titles, but we also screen classics, documentaries, shorts and artistic films that wouldn’t find a place in the multiplexes.

When did you start distributing films?

We became a distributor in 2012 out of necessity, because the films we wanted to show were not being acquired by the few companies operating in the country. There are three other distributors in Iceland, and they all have output deals with the big Hollywood studios. They rarely engage in buying independent titles, and if they do, they don’t necessarily hand it over to us because they all run their own cinemas. They used to buy more European films in the past, but when the DVD market started collapsing, the commercial foundation for that sort of titles fell apart.

What are the main challenges when distributing independent films in Iceland?

First of all, we are only 300,000 people in the entire country, so that is a challenging market on itself, no matter what you are selling. We are also cut-off geographically, so we have to do everything ourselves. The Icelandic market has been traditionally dominated by American Hollywood films, and there was no access to any other culture for a while. Since we started distributing, the number of European films released in Iceland has more than tripled. As for the other companies, they distribute all the Disney, Universal and Sony films. They compete with each other but also coexist. Even though we collaborate on a small level, we can’t really break into this market, so we have to survive sort of out of it.

On the other hand, these big distributors have no interest in anything that’s not in English, so we get to pick all the best pieces from the arthouse market. Films like Parasite (Bong Joon-ho, 2019), which was our biggest ever box-office hit, was totally up for us to grab. However, the marketing of these films can be extremely difficult. We release all of our titles on one screen only in our cinema, where we often sell as few as 80 tickets – and I’m talking about A-list festival films by notable filmmakers. A film that’s huge in France would be lucky if it sells 500 tickets over here, but we are paying for artwork and materials almost the same price as Sweden, which is 9 million people.

Do you ever acquire films as part of multi-territory deals?

I know there are a few distributors in the Nordic countries that sometimes group up together to acquire films, and I have notified all of them that I would be interested in joining, but I haven’t received an invitation yet. I know it’s never about the money, because you are not going to make a huge profit in Iceland. It’s all about letting art be distributed in other parts of the world, even if it doesn’t make sense financially. Don’t we want a living art scene in the country, where people know who François Ozon or Agnieszka Holland are? If we let it die, we won’t be able to bring those films again.

How do you manage to survive and run a healthy business with such low numbers in distribution?

Apart from distributing our own films, we also screen classics and a few series in the cinema. We do party-screenings of popular films like Dirty Dancing (Emile Ardolino, 1987) or Mamma Mia! (Phyllida Lloyd, 2008). We also have a bar in the cinema where we sell drinks that you can take into the screenings. We also host a bunch of film festivals and run quite a few ourselves, like the Reykjavík International Children’s Film Festival. We are the main venue for all sorts of artistic conferences and events in the country. That’s how we are able to finance ourselves up to 80% of our operational costs. The remaining 20% comes from public funds, in order to support our educational projects.

What was the impact of the global health crises for the market? What kind of measures were implemented by the government?

During the first weekend of March, the total box-office in the country was 21 million Icelandic crowns (roughly 15,000 tickets sold). Then the virus started spreading and the government decided to limit capacity in public places. On March 24, all cinemas in Iceland were virtually forced to close. We had to lay everyone off but we received some assistance from the government. Restrictions have been lifted in stages since then, although not all cinemas have reopened and attendance hasn’t reached the same levels. At the end of June, the total box-office was only 4.5 million Icelandic crowns (3,200 tickets), so the market was down by 80%.

What is your situation at the moment? What are your expectations for upcoming releases?

We haven’t reopened yet, but the reason predates the COVID pandemic. We have been running this place in a sustainable way for the last ten years, but our building is really run-down. The facilities are falling apart, and we can’t cover the renovation costs. On top of that, our lease was up on June 30, and the landlord wanted to raise our rent. We had been trying to negotiate new deals but nothing was happening, so in January we announced we were going to close the cinema. There was a big response from the community and suddenly everybody was ready to talk. After successful discussions with Reykjavík City officials, the Ministry of Culture and the owners, we finally came to an agreement and Bíó Paradís will be reopening this September. As a distributor, we have a bunch of films ready that were supposed to come out in March and April, but we are planning a fall release because summers in Iceland are really bad for arthouse cinemas. I’m not even trying with the multiplexes because they wouldn’t screen our movies, and I would never release directly on VOD.

What is the usual split of income for your titles? How do other windows perform compared to theatrical?

We only do theatrical, VOD and free-TV. There is no DVD market in Iceland anymore and the cable channels are not interested in what we distribute. It all depends on how the movie works in theatres, because what we get from TV is always more or less the same (there is not really a negotiation depending on the success of the film, they just offer a small subsidy of the release) and the income from VOD is very little. For an average film, the split would be theatrical 57%, VOD 14% and free TV 29%. If the film does really well in cinemas, the repartition could go up to 65% for theatrical, 13,5% for VOD and 21,5% for free-TV, although the first scenario is more typical.

What has been your most successful campaign for a European film?

The biggest surprise we had was Paradise: Love (2012) by Ulrich Seidl. We usually don’t have a lot of money for promotion, so we work with creative marketing. In this case, we found a girl in Iceland who wrote her master’s thesis on female sex tourism in Kenya. Somehow, an interview with her got on the cover of a couple of newspapers in Iceland and everybody read about it. Before we knew it, we had queues outside of the cinema. Many people thought the topic was very interesting and they were ready to see a German-speaking film about a woman’s sex-trips to Africa. It was a total box-office hit.

Why did you start working in this business and how do you see the future?

I lived in New York for a while, where I used to visit the best cinemas in town. When I came back to Iceland, it was very depressing to see there was nothing interesting for me in the theatres. I was very excited when Bíó Paradís was founded, and I was incredibly lucky to be hired as Managing Director. It’s been a wonderful ride so far, and I’m actually super optimistic about the future of distribution. We just have to look at all the things happening right now as an opportunity to rethink what we are doing. 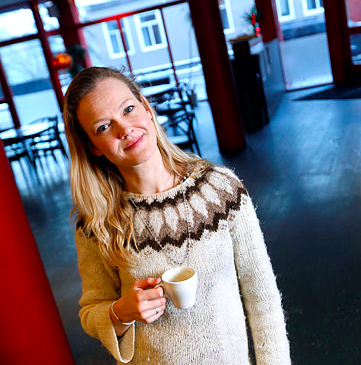