We interviewed Ivan Hronec, head of media company Film Europe, who gave us some insight into their particular business model, which played a crucial role in their survival during the global health crisis.

How would you describe the setup and editorial policy of your company?

Film Europe was launched 10 years ago. From the beginning, we solely program and distribute European and festival films. We operate mainly in the Czech Republic and Slovakia, but we also have some projects in Hungary and Poland, as well as some VOD and TV operations in Benelux. We are a vertically integrated media company, not just a theatrical distributor, which I believe is a big differentiator compared to other companies. We have two Pay-TV film channels, which were our first speciality. We also own two boutique-style cinemas, one in Bratislava [Kino Film Europe] and one in Prague [Edison Filmhub], and we have recently launched a VOD platform. We also organize three festivals in Central Europe, which are fundamental to our programming.

Can you explain your strategy of acquisitions?

Our line-up is defined by our festivals. First of all, we have Be2Can, which is an abbreviation for Benátky [Czech for Venice], Berlinale and Cannes. This is our main event, which sets our predominant strategy for acquisitions: we are buying and distributing films from those three festivals, especially titles from the main competition. The second concept is SCANDI, where we showcase films from the Nordic countries.  We are trying to cover these territories by providing a variety of films from Norway, Sweden, Finland, Denmark and Iceland. The third significant event is Crème de la Crème, focused on French-speaking films.

What are the main particularities of your local market?

The Czech Republic is very strange in terms of cinema ownership. In Prague, for instance, almost all significant theatres are own by a distribution company – including us, of course. This is crippling the market because the competition is actually based on the acquisitions. If you have good films, then you are showing good films. It is the same kind of competition that you find between Amazon, Netflix or Disney when it comes to their own production.

What were the effects of the lockdown for your work?

This will sound strange, but during this time we managed to have some progress in the company. We found time to focus on the development and launching of our VOD platform [Edisonline], which we programmed as our virtual cinema during the lockdown. After one month, we are increasing our numbers on a daily basis in both territories, so it is becoming a great alternative for distribution. In general, it was a great time to put some order in the company.

Obviously, the situation was tough. Everything was closed, and we lost a lot of money. Just with the cinema in Prague, we lost close to 50,000 euros on a monthly basis. Some people in the company panicked and decided to leave because they did not trust the cinema would survive. Even if that were the case, we would still have our TV and VOD, so we could continue with our business in a different way.

What kind of measures were implemented by the government during this time?

We got some state support, and I’m absolutely grateful for that. They covered close to 80% of the salaries, and now they are discussing additional support for the rental costs of the cinemas. Don’t expect from me to complain about the measures. It was simply force majeure. Nobody was prepared to deal with this. If it happens again, it would be a different story. We could actually make the government accountable for not being prepared, but the first time is absolutely out of control.

What was the impact of cinemas reopening on May 11 in the Czech Republic?

We did not open our cinema on May 11. It was not the smartest option, because nobody was ready. I understand it was important for the morale of the people, but not from an economic point of view. The operational costs were just too high to open with all the regulations. We decided to open on May 28, which was a far better option because at that time we could also open the cafeteria inside the cinema.

Multiplexes are still closed, which is not a big deal since they program festival films very rarely. The other independent cinemas in Prague are also own by distributors and we all tend to program our own films first so it is not a big change either comparing to the past. As for the other single-screen cinemas in the Czech Republic, they program our titles sometimes, but the income is marginal.

What kind of films have you released so far? How are they working compared to an average month last year?

We actually brought back to the cinemas some films that were just released right before the lockdown, like The Perfect Patient (Mikael Håfström, 2019).  We also released titles like Call Mom! (Lisa Aschan, 2019) or The Tobacconist (Nikolaus Leytner, 2018), but the most significant case was It must be heaven (Elia Suleiman, 2019). Fortunately, we managed to have the SCANDI Film Festival in February, so we had a bunch of Scandinavian films ready to be released. Some restrictions are still in place, meaning that we can only have 25 people for 100 seats. I would say we are losing 60% compared to an average month. We keep ourselves ‘above water’ thanks to our VOD platform and TV channels. Without those, we wouldn’t be here.

Before the pandemic, what was the usual split of income for your releases between the different windows?

We have a different business model compared to our competitors. For us, theatrical represents only 15% of our turnover, while the majority comes from TV. Up to 65% comes from our Pay-TV channels, and another 5% from our TV sales, with the rest coming from VOD. However, in our case, a better question would be “how much money comes from private sources and how much from public money?” And this is very clear: Film Europe is only getting 7.5% from public funds, the rest comes from our private activities.

Over the 10 years you have been distributing films, is there any specific campaign you are particularly proud of?

The thing that makes me the proudest is that we are a well-balanced private company, which is not relying on public money. I’m proud of the whole ‘ecosystem’ of the company: having our own festivals, cinemas, TV channels and VOD platforms. I believe that there is no other distribution company with such a combination. On top of that, we have never changed our acquisitions strategy, which means that we have accumulated the strongest catalogue of Berlinale, Venice and Cannes titles. This provides you with a coherent catalogue which is always ready to be combined and recycled in all levels of distribution.

On a more personal note, how should tomorrow look in your view?

Everybody needs to be ready to fight. I’m not going to complain. I know that we might have to face this situation again, but we will be prepared. We are going to find a way to survive, but we must diversify our business in order to be safe. That’s the clear message. 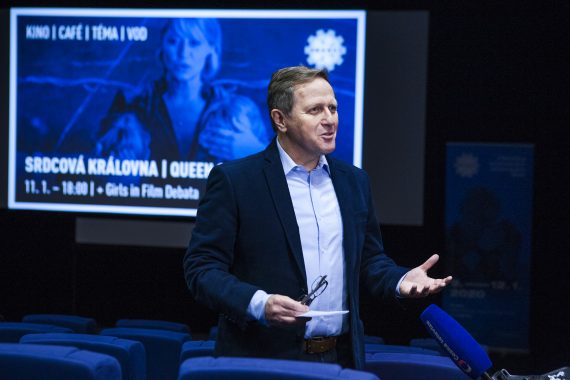