We had the opportunity to talk to Peter Sølvsten Thomsen, Head of Distribution of Copenhagen-based production and distribution outfit Angel Films. Our conversation revolved around the company’s business strategy, its editorial policy, the peculiarities of the Danish distribution market and the challenges posed by the ongoing coronavirus pandemic.

How would you describe your company’s line up and its editorial policy?

Angel Films was founded as an import service of high-profile arthouse films in 1988. The first series of films we boarded was Krzysztof Kieślowski’s Three Colours Trilogy. We focused on distributing European titles, some self-produced films as well as other notable arthouse pieces made around the world. Today, we have a more diverse profile, except for the fact we keep on releasing high-quality productions. At the moment, one part of the company works on arthouse titles from Europe and all over the world, as per our initial setup. We’ve recently had films from auteurs such as Claire Denis, Park Chan-wook and Paolo Sorrentino. However, we’re not just looking for very established directors, but we’re open to new talent as well. Our latest acquisitions include Julia von Heinz’s And Tomorrow the Entire World, Shannon Murphy’s Babyteeh and Ross Glass’ Saint Maud. Meanwhile, we have established a brand for children’s content called Rabalder Bio in 2012. The goal of this division was to distribute high-quality films for younger audiences. It’s been a very personal choice. Back in the days, I had young kids and was always disappointed about the cinema offering. The content was often unambitious, for both animation and live action productions. Thus, Rabalder Bio became a core part of our business.

What are the Danish market’s complexities and peculiarities? What are the main challenges you’re facing as a distributor?

Owing to the pandemic, everything is challenging! We have a very competitive niche market. However, in recent times we have noticed that fewer and fewer of them are performing well and there is a downward spiral in terms of streaming and TV consumption. Nevertheless, we have established strong collaborations among smaller distributors. We arrange common events during which we profile primarily European films for exhibitors. This is a good way for us – even though we’re still competitors – to invite exhibitors to play our films. This spirit of co-operation is quite a unique feature of our market.

We also have a very influential cinema club that counts 220,000 members, called Biografklub Danmark. They select ten films per year and viewers can watch them for half-price. The club’s reach boosts domestic cinemagoing and is extremely powerful within our market. A smaller alternative to this is Filmporten, which focuses on smaller and more niche films.

How do you see the work of a distributor? What is the added value it brings, especially when it comes to promote European films?

I’d say that, as an independent distributor, our primary role is to bring great films to our local audience. But, obviously, we also need to find a viable strategy to do that. We’re relying on Creative Europe and other funding opportunities to bring titles that cannot be distributed independently. This support is extremely important to allow these pieces to travel. For other films, we don’t need that sort of backing. We’d really like to see niche films performing better, both theatrically and digitally. A few years ago, we launched a streaming service called Filmperler. We were curating about 700 titles for the Danish audience. It’s been a challenging work and we attracted much attention, though we were mostly driven by a sort of idealistic, philanthropic commitment. At a later stage, the biggest Danish operator [Blockbuster] took over the brand. We’re still collaborating with Filmperler, and we were supposed to run some joint initiatives on select titles in 2020. For the future, our plan is to release three or four event films and later stream them on Filmperler. We’re looking at a disrupted chain of revenue for smaller independent films. It is quite evident that the existing funding options to boost theatrical releases and create awareness for European films are very helpful. If similar options were implemented for campaigns targeted at streaming, it would help lift the potential for these films, make the market more viable and hence create even greater awareness for these in the future.

What was the most successful promotion campaign on a European film that you had so far?

It’s difficult to answer with a single example, but I’d say that the creation of our label for young audiences Rabalder Bio has been our most “resilient” project. It started off with a clear idea and it’s now an established brand. 90% of these films are European productions. We’re proud that in 2017 we won the Cartoon Movie Award for the Best European Distributor thanks to our work on children’s animated flicks. Besides, I think that one of our most successful – and most fun – campaigns was that of Benedikt Erlingsson’s Of Horses and Men (2013). The film won the main award at CPH PIX. The director had been invited to attend the premiere and he came by riding a horse with his wife in Downtown Copenhagen. After that, the word of mouth spread quickly and the film became a hit. That has been a fun release, one that proves that if you go “niche” with your campaign, you can actually intercept an audience that wouldn’t have watched the film if promoted through conventional channels.

I cannot provide the exact numbers, but a rough estimate would still show theatrical windows as a primary distribution channel for European arthouse films. For example, you may even have a successful low-budget film that sells 5,000 tickets… Apart from that, the revenue coming from streaming platforms is generally not very good. These films are not prioritised by the biggest streamers. We’ve hard time in finding our space in bigger subscription services such as Netflix or HBO Nordic, mainly because these are interested in films for which we hold the rights for all Scandinavia. And that’s a tricky part of our territory structure… Many times, as a smaller distributor, we only buy the domestic rights, because the sales agent decide to split the territory. Hopefully, things will change if the smaller Scandinavian distributors will co-operate to build an appealing catalogue but so far, it’s been quite difficult. It’d be great to find ways to exploit the great potential of some of our titles on bigger platforms as well.

Concerning the coronavirus crisis, what has been put in place by the government in terms of aid measures for distributors?

We had no aid measures implemented here in Denmark. Production companies and exhibitors received some state-funded support, but there were no specific provisions for distributors. We had a local title, a Christmas film, released last month, but we went into lockdown in mid-December and we lost a lot of revenue. We’re trying to find ways to get some compensation but there are no places to apply for support. I doubt we’ll ever get any, unfortunately.

A late effect of the pandemic is that it has taught everyone to stream films and experience the convenience of selecting titles from a big catalogue. I think it’ll be interesting to see how many people will be ready to return to cinemas. I believe that they will, but will it only be for the big blockbusters in the likes of James Bond and Wonder Woman? Will they be back to watch European arthouse films too? This question is both interesting and scary.

Back in the 1990s, I was a film buff collecting VHS – and later DVDs – and organising film marathons with friends. Then I went to study film at the university. For some reason, I had always been attracted to this part of the film business. That’s how I ended up here. It started out as an internship and then it became a job in the industry. Later in 2007, I took my master’s degree and my thesis was about how digitalisation could influence the distribution of arthouse films. So, here we are! There’re some points in there that are still valid, though [laughs]… 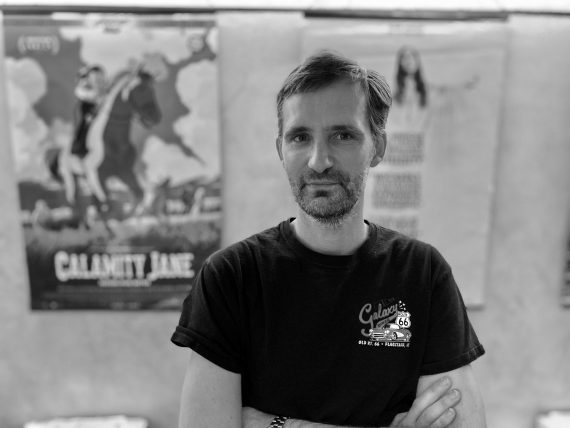