Far from being prerogative of do-gooders dictionaries, expressions such as “sharing economy,” “co-creation,” “open data” define today very concrete business models. So when it comes to indie film distribution, what can be shared?

20 distributors, 1 transmedia architect, 1 cultural centre manager and 1 representative of the Lux  Film Prize were gathered in Sofia by Europa Distribution in the framework of the Sofia Meetings, to discuss the potential of collaborative approaches in film distribution. Part of the workshop was held in collaboration with Europa Cinemas.

Domenico La Porta, transmedia architect, industry journalist and social media manager who works for Wallimage and Cineuropa among others, introduced and moderated the debate for the first part of the workshop, reserved to the members of Europa Distribution. Domenico focused his presentation on those free tools offered by Facebook that can make your communication more effective. As he showed, there are many ways of targeting more efficiently your audience on Facebook without boosting an ad. Distributors from different countries releasing the same film could benefit greatly from… being on the same page.

Having a good understanding of existing communication tools and the way they develop is essential to keep up to speed with both the audience and the industry, but sometimes specific needs require the creation of new tools. In 2010 Europa Distribution created for its members Cidinet, an internal database where they could privately exchange information about their releases and share materials. Clara Léonet and Isabella Weber (Europa Distribution) presented the recent developments of this database, which is since last year accessible directly from Cinando

Marisella Rossetti, responsible for the Lux Film Prize of the European Parliament, along with Juliette Duret (Bozar Centre of Fine Arts, Belgium) and Aneta Sekula (Polish distributor, Gutek Film) discussed together their experience with simultaneous screenings, focusing on their recent collaboration on Son of Saul. On the occasion of the International Holocaust Remembrance Day, on January 27th, the Lux Prize organized a live-streamed debate with the lead actor of Son of Saul Géza Röhrig and the President of the European Parliament Martin Schulz. The debate preceded the simultaneous screening of the film in 8 European cinemas (among which the Bozar and 4 Polish cinemas involved by Gutek). The audience following the debate from the cinemas or from Youtube was invited to participate asking questions on Twitter.

After having illustrated some example of mutualisation with partners outside distribution, the  workshop presented some case studies of collaboration among distributors within the Europa Distribution network. Andreas Baumann (Drei-Freunde Filmverleih, Germany) shared with the group his experience at collaborating with the Romanian distributor Freealize for the release of the Irish comedy The Stag. “Freealize and Drei-Freunde Filmverleih worked together on the releases of the films and we had to get to know each other’s market to work out a common strategy but also differentiate accordingly to local market.” The collaboration was seen as very positive and could be reiterated in the future.

In 2012 the European Commission launched a preparatory action “Circulation of European films in the digital era” to test the impact of releasing films simultaneously or near-simultaneously on video-on-demand (VOD) and cinemas, festivals, or television in several countries. One of the projects supported by the preparatory action was “The Tide Experiment” and several distributors from the Europa Distribution network took part to it. Six of them were present in Sofia and discussed some outcomes of the project, with a focus on the collaborative aspect, its opportunities and challenges.

Since 2014, Europa Distribution and Europa Cinemas organize round tables with the scope of creating mutual understanding of the needs and purposes of each side. Distributors and exhibitors were called to brainstorm on several topics and find together solutions they could implement to support better their common releases. They talked on online and offline marketing assets, customers data analysis and special events, thinking of the current practices and the possible alternatives.

Exhibitors, unlike distributors, have the chance to know directly their customers, both in person and through their social media. If demographical information were shared more constructively they would represent an extra tool for distributors to adapt their strategy locally, better targeting the cinemas’ audience. For the distributors it would be equally important to receive a direct feedback from the exhibitors on how their physical marketing assets works on location.

In some countries, exhibitors attend every year national meetings where distributors present their line-up with trailers and excerpts and it is really appreciated by the exhibitors. This is not the case everywhere but in general it was remarked that more direct forms of communication (regular meetings, phone calls instead of emails) can help improving business relationships and mutual understanding. “We really appreciate those distributors who take the time to come to check out the location of the cinema to see for themselves where the posters will be placed, how much space they can take and what’s the atmosphere of the cinema” said an exhibitor.

Another issue raised was that of media assets. Having more completed social media kit including visuals, shorter trailers, pictures, fun facts and quotes from the film, would help exhibitors promoting the films on their socials. Exhibitors especially appreciate emendable materials, both on and off line, that can be personalised with local information about the screenings as well as exclusive assets. In certain cases, more interconnection with social media across territories would also be beneficial for the visibility of the local campaigns.

The creation of special events to promote a film release is today a common practice for both distributors and exhibitors. What to do to make the work more complementary and efficient? While exhibitors have a stronger capacity to work on local community building, distributors know better the marketing strengths of their films. The organisation of contests, sneak previews, Skype Q&As with the talents and any original event connected with the film that can attract the audience, require both expertise and a joint effort. “Going the extra mile always works” summarized Rüta Svedkauskaite from Lithuania, both distributor and cinema programmer.

The European market is composed by a variety of distinct local realities and the differences must not be overlooked but observing the practices of a neighbor distributor or exchanging information with the local exhibitor can inspire new ideas and keep the business dynamic. The horizontal exchanges, peer to peer, organized by Europa Distribution and Europa Cinemas, continue all the year long resulting in new collaborations and exchanges of successful stories. 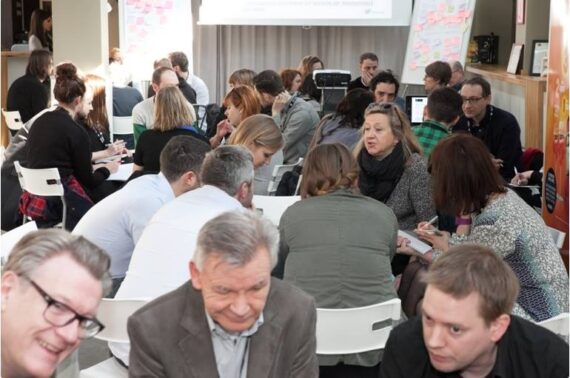