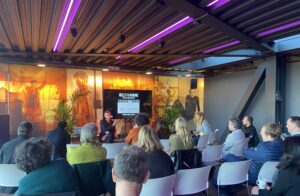 The substantial decline in cinema attendance for arthouse films after the pandemic, the overall challenges of releasing independent documentaries, the limited availability of titles for some territories or the effects of the war in Ukraine were among the many topics discussed by independent film distributors in the last workshop hosted by Europa Distribution at IDFA. For the fourth time, the international association of independent film publishers and distributors renewed its partnership with the Dutch festival’s Industry program. On 14 November, various members of the association gathered at the Internationaal Theater Amsterdam for a closed session on the release of documentary films, aimed at sharing different case studies and analysing the outcome of their strategies.

Andrea Romeo, CEO at I Wonder Pictures (IT), broke the ice with a presentation on their release of Flee, the animated documentary by Jonas Poher Rasmussen about an Afghan refugee struggling to build a new life in Europe. Despite its success (the film became one of the most celebrated titles of last season), Romeo pointed out it was a difficult project to release, given that “no one in Italy considers documentaries for a large audience and most people think animation is just for kids”. However, I Wonder Pictures trusted its potential and joined the project at the development stage, following its path through several international festivals and events (Cannes, Telluride, European Film Awards) and updating the communication strategy accordingly, paving the way for the Italian release on 10 March 2022. By then, the film had already made history, becoming the first title ever nominated for Best Animated Feature, Best Documentary and Best International Feature Film at the Academy Awards. It got great visibility in the Italian press and its trailer spread across all theatres in the country, including multiplexes, aiming to reach a younger audience that could be more inclined towards animation. After the Oscars, Jonas Poher Rasmussen went from LA straight to Italy to promote the film, attending different screenings and events that worked as a closure for its theatrical run. “He was very generous […] joining Zoom calls and Q&As before and during the Oscars campaign. And then coming back for a few days at the end of the tour”, praised Romeo. Considering the “market in Italy decreased by 65%” after Covid-19, Flee stood out as a major success in the territory, where it scored the second-best box office result worldwide.

Presenting an interesting contrast with the Italian case, Gábor Böszörményi (Mozinet, HU) also shared his insights on the Hungarian release of Poher Rasmussen’s film. “Our campaign was completely the opposite”, said Böszörményi, who acquired the title after the Oscar nominations. Even though Mozinet had some considerable success releasing documentaries lately (Wild Horses, Heart of Oak), adult and non-Hollywood animation remain a hard sell in the country. Likewise, as a reaction to the Hungarian government’s stance on LGBTQ rights and immigration issues, the topic has been widely covered in recent times, making it difficult to attract an already ‘saturated’ audience. Facing a very busy second half of 2021 in terms of releases, and with a 46% drop in the arthouse cinema audience compared to 2019, the Hungarian distributor concentrated his efforts on an online and PR-based campaign. “But then, the war in Ukraine broke out”, as sadly recalled by Böszörményi. All the media attention focused on the conflict and the upcoming national elections, leaving very little space for cultural articles. In view of this situation, the distributor decided to organise a charity screening and donate part of the revenue to an NGO helping the refugees coming from Ukraine. Lastly, Böszörményi compared the results of this film with those of Happening (Audrey Diwan, 2021), released by Mozinet in September. Even though Diwan’s film enjoyed a longer and more extensive campaign, the numbers didn’t differ that much from those of Flee. “This shows that the audience in Hungary is not that open to dark topics”.

Back in Italy, acquiring The Velvet Queen by Marie Amiguet & Vincent Munier was an “instinctive move” for Anastasia Plazzotta, CEO & Head of Acquisitions at Wanted Cinema. Motivated by the outstanding results of the French release, Wanted Cinema embarked on a full-scale campaign, which started by identifying the various potential target audiences. The film follows wildlife photographer Vincent Munier and renowned French writer Sylvain Tesson on a mesmerising trip to find the elusive snow leopard in the Tibetan mountains, in what Plazzotta describes as a “matryoshka documentary” that combines many themes and interests. One of the key elements of the campaign was its intensive work with partnerships, which included publishing houses and bookshops (in an attempt to involve literature lovers), different associations connected to nature and wildlife; museums and natural parks (trying to reach a family audience), and even the Tibetan communities in Italy, who attended screenings and talked about the political situation in the country. In order to help localise the film, the Italian publisher decided to involve local writer Paolo Cognetti (author of the book The Eight Mountains, also adapted into a film), who was trusted with dubbing Sylvain Tesson. Apart from investing in traditional media and advertising, with articles in specialised magazines and exclusive interviews in the main national outlets, Wanted Cinema also worked with important influencers and science communicators. In terms of materials, they produced numerous trailers and short clips with quotes, animated posters, 3D roll-ups and even Instagram filters. It was particularly important to connect with the younger demographics, so the distributor decided to organise a contest for kids and to create special materials like pedagogical dossiers and diaries with games. “We invented everything possible”, in Plazzotta’s words.

Since 2020, Swedish company Doc Lounge has implemented a very specific approach towards film distribution, focusing on special event screenings taking place in a network of clubs, restaurants and other non-theatrical venues. “We’re trying to attract audiences that are not regular cinema-goers to watch documentaries in a public place”, explains Jonas Pedersen Hardebrant, Distribution & Development Manager of the company, who illustrated their work strategy with the release of Nelly & Nadine by Magnus Gertten, a love story about two women who fall in love in a concentration camp in 1944. The film premiered in the Panorama section of Berlinale, where it won a special mention Teddy Award. Doc Lounge decided to release it on 18 March, right after the German gathering, trying to benefit from the festival buzz. “It’s not the easiest film when it comes to selling it to the public because it’s quite poetic, and it’s mostly based on archive footage”, admits Pedersen Hardebrant. However, the title boasted great reviews and word-of-mouth within the club circuit, which persuaded some cinemas to release it. In terms of marketing, the promotion of the film focused mainly on social media, establishing collaborations with influencers concerned with LGBTQ+ issues. “We’re fairly satisfied with the outcome. Especially from the event screenings, which encouraged many people to organise more screenings and activities around the country”.

Vera Herchenbach and Rufus Richardson, from Australia’s Madman Entertainment, opened up about their campaign for Fire of Love by Sara Dosa, which follows volcanologists Katia and Maurice Krafft. After its triumphant opening at Sundance – where it won the Audience Award –, there was an intense bidding war over the film. A couple of months later, the theatrical window became available, and Madman Entertainment acquired the title, which had its Australian premiere at the Sydney Film Festival. The focus of the campaign was to reach the target audience via owned and exhibitor channels: “All efforts were heavily weighted towards exhibitor marketing and ensuring the best possible profile on our social media channels”, said Richardson. In a post-pandemic market where documentaries are extremely challenging to release, the Australian distributor found it crucial to attract broader audiences. To that end, the film was not marketed as a documentary, but as a “quirky romantic love story”, with stunning cinematography and references to Jacques Cousteau and Wes Anderson. It was promoted as a completely cinematic experience, trying to set the film apart from other documentaries, which helped secure a wide IMAX release. In terms of media coverage, reviews were extremely positive, and the film enjoyed regular media visibility throughout its theatrical run. “We spent a lot of time and effort maintaining relationships with media and journalists”, as stated by the distributor. In the end, Fire of Love signed an exceptionally positive result, with the festival buzz emerging as the key component of the strategy.

In opposition, Mika Siltala (Cinema Mondo, FI) offered a very different perspective on the release of Dosa’s film. The Finnish distributor, who also acquired the theatrical rights for the title after its Sundance premiere and released it on 19 August, started by explaining the strong influence of weather on their market when it comes to cinema attendance, which tends to go rather quiet after long winters. On the other hand, Cinema Mondo is also running an open-air cinema in downtown Helsinki, which scores remarkable numbers in the summertime. Fire of Love was given a prime slot in this venue, while managing to convince other theatres to release it. Following a similar approach to their Australian colleagues, the film was not specifically promoted as a documentary. Instead, the Finnish outfit chose to stress its “unbelievable story and mind-blowing visuals”. In terms of marketing, promotional materials were displayed at tram sites and metro stations in the main cities, but the campaign relied strongly on word of mouth as the “only truly effective way” of engaging with target groups, in Siltala’s opinion. Unfortunately, the film seemed to “run out of steam after a month and a few thousand admissions”. The particularities of a national market that relies heavily on the Helsinki metro area – where some arthouse films get more than 70% of their total revenue –, a population recently freed from all Covid-19 regulations and a war starting in spring involving a neighbouring country could be some of the reasons behind the film’s modest conclusion, according to the distributor.

Rounding up the session on a very positive note, Siltala was joined by Kim Foss, CEO of Denmark’s Camera Film, to comment on the release of a shared title: The Truffle Hunters by Michael Dweck & Gregory Kershaw, revolving around a group of elder men hunting for truffles in Northern Italy. Sony Pictures acquired the title and made the theatrical rights available for Scandinavia, where the film had great results in all territories. Foss highlighted the importance of the trailer and social media clips as the main promotional tools, as well as the decision to include a reference to “Piemonte” in the translation of the title. Praising the film’s editing, photography, and characters (“It’s like a Michelin restaurant visit!”), the Danish distributor lamented the title was not available in most territories. As for Finland, Cinema Mondo released The Truffle Hunters in early December, just a couple of weeks before the government announced a new lockdown in the country. “We lost the whole Christmas holiday”, explains Siltala. But the film turned out to be a rare example. While most titles were “killed” by the lockdown, the Finnish distributor started organising numerous private screenings following the limitations on capacity, and The Truffle Hunters became the biggest hit during that period. “Sometimes we have a happy story to tell”.

As in previous gatherings hosted by Europa Distribution, the session allowed participants to learn from the experience of other colleagues working with similar titles in different territories, reflecting on the ever-present question of how the work carried out by independent distributors can have an impact on the success or failure of a film. By examining a wide range of business models, marketing strategies and approaches implemented for the release of arthouse documentary films in a post-pandemic scenario, these case studies foster a better understanding of the various challenges faced by film distributors today, both those specific to a particular country and those affecting publishers worldwide. The activities of the network will continue in upcoming festivals, with 2023 first stops at Berlinale, Cartoon Movie and Sofia Meetings.