The whole film industry knows it well : the digital era has brought many changes in the daily work of its stakeholders but also in the audience’s habits and expectations. In order to keep up, you have to adapt and think about new strategies.

In Rome, Europa Distribution in partnership with The Business Street organised an open panel reuniting experts from different sectors to discuss innovative marketing and distribution strategies.

Amongst these new patterns, VOD and its effects on the other windows are a current topic. For Charles Tremblay’s distribution company Métropole Films (Canada), digital sales surpass now physical sales. On the other hand, Day & Date releases are far to be a regular pattern : exhibitors often oppose it and as Tim Grady (Adopt Films, US) points out, the only independent distributors for which it works well in the US own their own cinemas.

Indeed, it is not always easy to find a screen available to show arthouse films, or to find an appropriate release model or theatre. When releasing Winter Sleep, Tim Grady could only find one screening a day due to the length of the film and its niche nature – despite it won the prestigious Palme d’Or. Release schedules are more and more busy everywhere in Europe and beyond.

Therefore, could VOD supplant theatrical? British exhibitor Madeleine Probst (Watershed) explains that the big UK players from her sector are investing this part of the business. Katie Ellen, working for the BFI, has been observing and testing a lot of experimentations with distributors. Results show that VOD is not cannibalising cinema audience : people still like to have their nights out. As Stefano Massenzi (Lucky Red, IT) and Daniela Elstner (Doc&Film, FR) suggest, it is more TV channels than cinemas that should be scared of VOD. Also, all panelists agree that in terms of marketing, theatrical still has a big influence : it gives credit and prestige to the film.

For that reason, screening a film as an event can have its advantages : when people know from the beginning that the film will be on screens only for a short period of time, it creates demand. Katie Ellen recalls one of the most successful event release in the UK, Nymphomaniac : the two parts were released on one night in 70 cinemas and the whole P&A went to the event. It was profitable for the distributor, the exhibitor and the VOD platform. Watershed also screens events that are successful, such as live transmissions of the London Film Festival. For Lucky Red, films that did good as events are mostly children or pre-adolescent films. Events are an opportunity to diversify the cinemas’ offer, though panelists think it is unlikely that it will take over as the new classic release model.

Kobi Shely works for Distrify, a company that offers digital tools and, amongst other things, enables distributors to make their own platform. To Shely, when developping new patterns, good knowledge of your audience should remain the priority. Data that services as Distrify offer are treasure: to have access to it can really enable to move award. But to be efficiently used, as Ellen points out, it has to be well understood and analysed first.

Jakub Duszynski (Gutek Film, PL) is implied in a project that aims at engaging audience: with Scope50, 50 people from a country get to watch 10 films in exclusivity. It is them who choose the one they want to see released in their country. If some feel that the audience need to be “educated”, it is true that there’s a balance to be found, a dialogue to be created between industry and consumers.

Nowadays, what is essential is that the film industry professionals join and reflect together. For example, as a sales agent, Daniela Elstner feels that the changes her sector faces (such as the decreasing of the MG) do that she needs more and more to work closely with distributors. Changes are the occasion for the different stakeholders of the industry to gather, take risks together to experiment and find solutions. 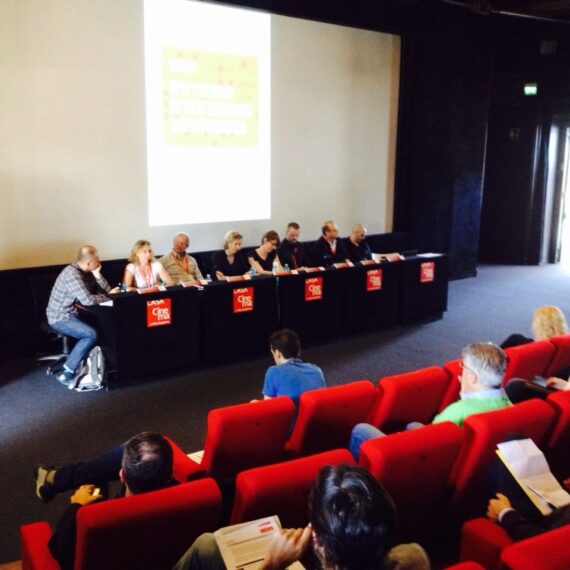