We caught up with Pascal Trächslin, CEO of Basel-based production and distribution outfit Cineworx. Our conversation revolved around the company’s line-up and strategies, the support measures implemented to fight the ongoing healthcare crisis and the distribution of European arthouse films in Switzerland.

How would you describe your company’s line-up and its editorial policy?

The company was founded by myself in 2003 and our work is rather particular, as we’re also producers since 2004. I would say that our line-up has two strong focuses. The first focus is on national films; in particular, here we have a strong documentary tradition and non-fiction films are very well received in theatres. So we work on Swiss titles, mostly documentaries. We occasionally include some local fiction film. Our second focus is on sourcing the best international arthouse titles for the Swiss market. Most of these are playing at major festivals such as Cannes, Berlin and Venice, often in the main competitive strand. For obvious reasons, we didn’t distribute many films last year. However, some of our recent titles include Nora Fingscheidt’s System Crasher, Céline Sciamma’s Portrait of a Lady on Fire, Levan Akin’s And Then We Danced, Mounia Meddour’s Papicha, as well as Hirokazu Kore-eda’s two latest features, The Truth and Shoplifters. Moreover, we try to follow the same directors as much as we can. That’s part of our company strategy.

What about the Swiss market? What are its main complexities and particularities?

We’ve a divided market, based on our three official languages. The largest is the Swiss German market – it accounts for 60% of our revenues – followed by the French speaking one – accounting for about 30% – and, finally, a small Italian niche, which accounts for about 10% of our income. Distributing arthouse titles is particularly difficult in the Italian part, more than in the rest of the country. On the contrary, the Swiss French market – just like the French one – is made of arthouse enthusiasts, so it’s a good place for these films. The most complex aspect is the need to organise more than one release for each film. If we distribute the title in the whole country, we set up three different releases, often dependent on the respective date in Germany, France and Italy. We have to prepare three different press kits, three different campaigns, modify the poster accordingly, publish one DCP with three different subtitled versions, and all of this implies additional costs.

What are the challenges and the pros in distributing European independent films in Switzerland?

We have a strong – but very competitive – market. So I believe the most important thing is to get the right European films, featuring a good balance between known cast and innovative storytelling. Next, you need to understand how to sell them. I think that’s the most challenging part. Even though we’re not part of the European Union’s MEDIA programme, we have a programme in place called MEDIA replacement measurements that helps us to release films and create good campaigns for European titles. For us, it’s an advantage that the various communities have a strong connection to the respective neighbouring countries. Thus, for example, if we’ve an Italian feature, we already know that there’s a target audience to intercept. And that obviously is very helpful to release European films.

How do you see the work of a distributor? What is the added value it brings, especially when it comes to promoting European films?

My colleague Stefanie Kuchler and I are really trying to choose the best films to bring to our audience. I think that’s our core job. We are also trying to build up a trademark so that people can recognise our titles and expect high quality standards. Another added value we can bring is our knowledge in creating the right campaign, so that these films will find an audience. So, one part of our job is choosing the right films – and that takes relatively little time – and the other is organising the campaign, which is obviously much more time consuming. Somehow, each time you’ve to start everything from the scratch, which I find a good thing because it keeps you alive [laughs]!

What was the most successful promotion campaign on a European film that you had so far? What was its secret ingredient?

I think one of the most surprising campaigns I’ve ever worked on was that of Malik Bendjelloul’s Searching for Sugar Man, with which we attracted around 40,000 people to the cinemas. We started with a very small release – just a few theatres – so that we could rely on a snowball effect. It also helped that, at the time, every radio station was playing Sixto Rodriguez’s songs and creating buzz around the musician and the documentary. Obviously, the success wasn’t as big as in France, where they started with just one print! Still, this was one of the best campaigns we ever had. Generally speaking, we’re not just looking for a secret ingredient. We basically have to find the right balance between all the different types of promotional strategies. For sure, the film itself is the key element. If you’ve a big budget, you can always try to create buzz and gain as many admissions as you can over the first two weeks. However, we’re a rather small company, so what we do is trying to gain viewers through the word of mouth and choose the right campaign partners. While working on And Then We Danced, for example, we established partnerships with dance associations and museums. These special collaborations always go along with more traditional promotional tools, such as circulation of trailers and posters.

I think we still have a 60-70% share coming from theatrical releases, sometimes even more. We’ve a very small – but stable – income generated by free TV. We have a complex market but we can also sell the films twice or three times if you have the right talents. Besides, DVD revenue is still there but obviously declining, and VOD is less profitable than other distribution channels. We work with a few, mostly arthouse-oriented platforms, which boosted their audience during the pandemic.

Concerning the coronavirus crisis, what has been put in place by the government in terms of aid measures for distributors?

In this respect, we’re a happy island. We’ve two main provisions in place; one is a system that supports our salaries and is a short-term compensation, whilst the other is a sort of “cancellation fee”, namely a 60%-80% payment of what our regular revenue would have been under normal circumstances. The amount is given by an estimate of our previous years’ revenues. Filling the application forms has been a lengthy process, but I’m not going to complain about that! The money comes from the federal government and is being distributed locally – for example, here in the Basel region there’re only two distribution outfits that benefited from these grants. Most of other market players are based in Zurich. We got the first instalment between the end of October and beginning of November, then the second one came in at the end of the year. These support measures are set to be in place for a total of 20 months – until the end of 2021 – so we’ll be applying again.

In the beginning, I tried to make films myself. I’ve also tried to enter film schools, but it didn’t work out. Later, I ended up working for a local film club and became a journalist. At some point in my journalistic career, I had to interview someone working for a production company, and I ended up working there for about seven years. I’ve also done some distribution and co-production work for them. In 2003, I decided to create my own firm, in order to give myself more editorial freedom. Currently, we have nine staff. I work 40% for the distribution and 80% for the production department. [laughs] So I work normally six days a week. But as it’s also my hobby it doesn’t feel like an obligation. I like it so much. I couldn’t think about any other job I would do in my life. So, I feel really privileged to work in the field of my dreams. 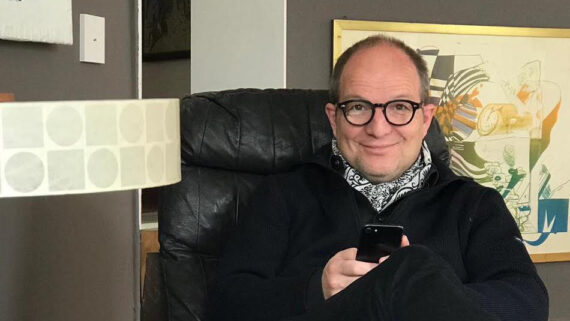