Landing for the first time at the IDFA, Europa Distribution on November 19th made full house organizing -in partnership with the Festival’s Industry Talk programme- a public panel dedicated to the potential of documentaries when it comes to theatrical release. The panel of experts involved to explore the theme included independent distributors members of the Europa Distribution network Katerina Dvorakova (Aerofilms, CZ), Greta Akcijonaite (Greta Garbo, LT) and Huub Roelvink (Cherry Pickers, NL); the US distributor Daniel Braun (Submarine, US), and Cecilie Bolvinkel (DK) representing the European associations EDN and Moving Docs.  The discussion was moderated by the digital marketing expert Mathias Noschis (Alphapanda, DE), who guided the panel trying to find some common trends in the different success stories presented. Is there an “X factor” that makes a documentary especially suitable for theatrical distribution?

In Lithuaniadocumentaries have a long tradition dating back to the communist time when local filmmakers who wished to express themselves hid their political messages in poetically dense documentaries, capable of escaping the censorship. Today Lithuanian documentaries can proudly stand the comparison with local fiction films and even reach the “most watched” position. It was the case for The Ancient Woods that in 2017 brought to the cinema 50.000 people. According to Greta Akcijonaite, the main reason for the film’s success lays in its exploration of nature, a theme that deeply resonates with Lithuanian audience. At the moment though, the success of Lithuanian documentary filmmakers doesn’t seem to open the way to international documentaries that still struggle to find their way to theatrical.

Moving to the other side of the Atlantic, Daniel Braun offered a very optimistic view on the documentary landscape, highlighting the presence of no less than four US documentaries that in 2018 not only made it to theatrical release but that rocked at it. Free Solo, Three identical Strangers, RBG and Won’t You Be My Neighbour all made over $10M at the US Box Office. It is still too early to see what the international theatrical career of these titles will be like but a lot will depend on how much their main themes will be able to appeal to different local audiences. Commenting on the international potential of these titles, Huub Roelvink added:“I personally loved Won’t You Be My Neighbourbut I could not buy the film for the Netherlands as my audience would not be familiar with the main character, who is widely known in the US”.

Bringing to the table her pan-European experience, Cecilie Bolvinkel described a very heterogeneous situation:  “Moving Docs works with partners from 18 countries, bringing a selection of documentaries to different European territories and we never had one documentary that worked everywhere.” As for any feature film, the local success of a documentary depends on a large variety of factors, many of which are “territory related”. Issues that feel topical in one country won’t necessarily translate well elsewhere. But the local element of a film can also be built by a smart marketing campaign that makes it possible for a documentary about a Russian gymnast such as Over the Limit-premiered at IDFA in 2017- to suddenly become a Greek hit by involving a popular national gymnast and through him reaching the whole gymnastic community.

How to target the audience?

The panel generally agreed on the fact that documentaries with a clear thematic approach (biopic, music, nature, sport…) are easier to work with because they bring their core audience already with them. Evaluating their ability of going beyond their first target audienceis however much more difficult.

Discussing the example of the Czech documentary King Skate, Katerina Dvorakova illustrated the marketing strategy adopted by Aerofilms: “Since the documentary is about skaters during communism we though it would be very important to involve skaters’ communities, and we managed to bring them to the cinemas, along with their skates. Their involvement helped us to create a buzz and we broadened our target group presenting the film as a story about youth, communism and freedom.”

Huub Roelvink warned on the danger of relying too heavily on niche target groups, highlighting the difference between people’s interest towards a certain topic and their actual will to watch a film about it, especially at the cinema. “The natural target audience for a documentary about Oasis in the Netherlands would be over people between 40 and 50. This group though might not be interested to watch the film in the cinema and prefer watching it on VOD so they don’t need to hire a babysitter for example”.

Opening the discussion to the audience -mainly composed by producers, distributors and creative- Mathias Noschis invited distributors to make a wish list of the marketing tools that would help them to promote documentary films. The panellists unanimously recognised that the basics are a good poster and a very good trailer. “The trailer is still our most powerful marketing tool and trying to promote films with bad trailers is a lot harder,” explained Roelvink. Commenting on the topic Bolvinkel and Akcijonaite added that, in the era of digital marketing, having good stills and short videos and any kind of extra footage is extremely useful to nourish the communication on social networks. The availability of the film’s director to be involved in the campaign is also crucial and in some cases it makes all the difference.

Summarizing the main trends that emerged from the discussion, Noschis pinpointed some topics that are proving more successful in documentaries in theatres: biopics are undoubtedly raising a large interest, along with films about nature and extreme adventures in the wild; and music documentaries are still in high demand, with many distributors dreaming of a new Amy.

Europa Distribution members continued the discussion on the next day during a closed session. Julia van Berlo, (Cineart, NL) and Oscar Eriksson, (Folkets Bio, SE) discussed about their respective release of Faces, Places by Agnès Varda and JR; Marie-Pierre Valle, (Wildbunch) talked about the French release of Raymond Depardon’s 12 Days, Istvan Mràz, (Mozinet, HR) explored the case of the theatrical release of HBO’s production Ultra by Balazs Simonyi; Mika Siltala,(Cinemamondo, FL) illustrated the marketing strategy adopted for Whitney by Kevin McDonald; Andy Whittaker, (Dogwoof, UK) presented the case of KUSAMA – Infinity by Heather Lenz and Kim Foss (Camera Film, DK) and Mika Siltala compared their strategies for the respective releases of Maria by Callas, by Tom Wolf. The singularity of each of the case studies explored highlighted once more the danger of trying to follow too strict recipes, trying to replicate past successes, both when it comes to acquisition and when planning marketing strategies. Independent distributors know they need to treat each film as an entirely new marketing project, playing with its specificities to bring the film to their local audience in a way that is appealing to its own tastes and habits. The workshop offered them the opportunity to share their insights on the different documentary releases and to learn from the others’ successes and failures, discussing also of how to best collaborate to bring together their creative energies.

The conversation on how to best bring films to their audience continues all the year long with Europa Distribution… stay tuned! 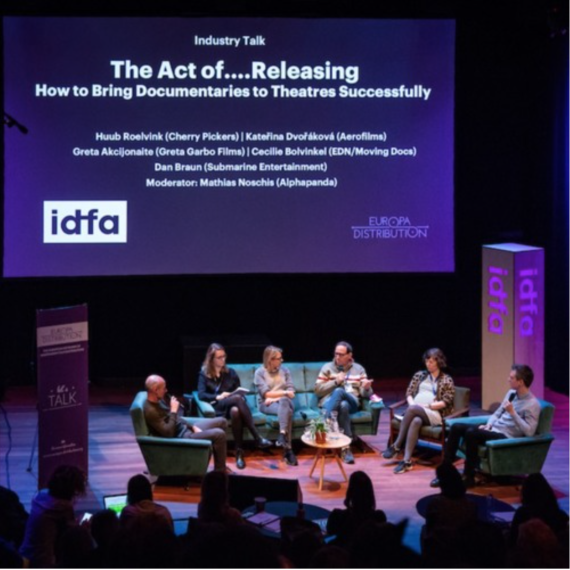