In the framework of the MIFA, the Industry event of the Annecy International Film Festival, Europa Distribution organised a private workshop on June 14th dedicated to those distributors who, despite the difficulties, take on the challenge of releasing independent animation films in Europe.

Nine speakers, each coming from a different country, discussed the recent and upcoming releases of three common titles with their European colleagues. My life as a Courgette by Claude Barras was discussed by representatives of Cinéart (Netherlands), Outsider Film (Portugal), Storytelling Media (Norway), Cinemanse (Finland) and Angel Films (Denmark). The discussion on The Red Turtle by Michaël Dudok involved distributors from Lumière (Belgium and The Netherlands), Aerofilms (Czech Republic), Mozinet (Hungary) and Lucky Red (Italy). The workshop closed with the case study of the upcoming Loving Vincent by Dorota Kobiela and Hugh Welchman (in the Benelux – Cineart, and Finland – Cinemanse).

Each of these films represents a distribution challenge for different reasons, but one they all have in common is their visual uniqueness, which sets them well apart from the Disney style of animation that children (and large audiences) are used to.

Discussing the case of My life as a Courgette, distributors shared their surprise at realising the film often worked better with adults than with children. “Parents admitted that the film raised complicated and serious talks in the family that, while being obviously important, are not necessarily what they had in mind for a regular movie night” confessed one of the distributors, who had initially targeted families and children as the primary audience.

Addressing a film to children implies, with a few exceptions, undertaking the costs of dubbing it, and dedicating a relatively important share of the budget to this cost with no guarantee of achieving something comparable to the original, which was, in the case of Courgette, quite outstanding.

Dubbing was not an issue distributors faced when releasing The Red Turtle, the film being without dialogue. Not surprisingly though, the absence of dialogue was not among the most emphasised features of the film in marketing campaigns. “In the Czech Republic, we ran a few test screenings to try to understand on what age group the film could work better and we got very mixed results: some children couldn’t get used to the slow pace of the film but many others, especially younger ones, loved it,” explained Kateřina Dvořáková from Aerofilms. The Studio Ghibli label was one of the strongest selling points of the film in most countries, redirecting it towards a more adult audience. “We chose to release it as an event, on a short window of three days and we targeted only adults, investing mostly on a digital and social campaign,” stated Damiano Ricci from BIM. In Italy, where these initiatives are now becoming quite common, this strategy proved to be successful, catching the audience attention.

Looking into the near future and exchanging ideas with the rest of the group, Hanna Lajunen (Cinemanse, FI) and Renske Diks (Cineart, NL) discussed their plans for the upcoming releases of Loving Vincent in their respective territories. The film received a lengthy standing ovation in Annecy and its trailer, released on Youtube a year ago, generated a massive number of views (now over 2,5 M). Will good reviews and a big buzz help distributors to create an audience for such (and future) unusual animation films?

Europa Distribution will continue the conversation about the current challenges of film distribution next week in Karlovy Vary. 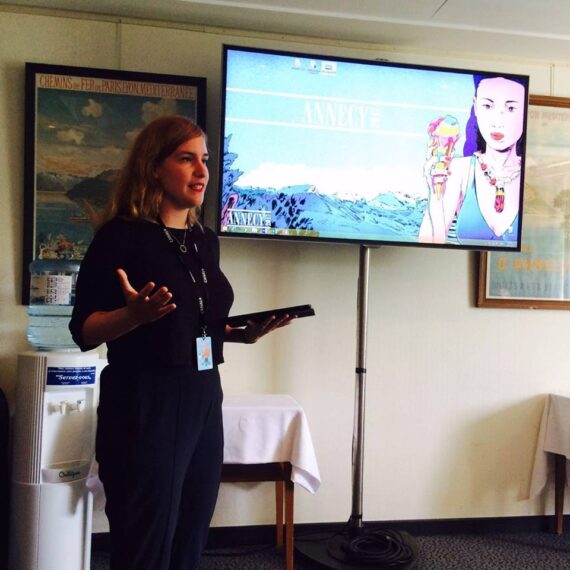