The Nordic region has become established as a distinctive brand and a quality mark for international distributors with prospects for continued growth, according to a panel at the Haugesund International Film Festival, organised by Europa Distribution.

Hans Kok, managing partner of Dutch distribution company Arti Film, said the Nordic region had once been recognised in the Netherlands only for its children’s content and for a few major auteurs, notably around the Dogma movement, but over the last couple of decades, he said, there had been a major cultural shift.

The change began, he suggested, with a series of novels, notably Stieg Larsson’s Millennium trilogy, which had created an enviable reputation for intelligent storytelling that could break into the mainstream. That reputation was enhanced by a number of hit “Nordic noir” television series, such as The Bridge and The Killing.

The region has successfully built on those foundations to establish internationally-known genres, a reputation for low-cost, high-quality but accessible work and a recognisable star system.

Kok said it offered a smart and clearly European alternative to dominant US works and success has bred success with the Nordics benefiting from increased cultural familiarity in terms of language, stars and content. “People have been getting warm for the content”, said Kok, with the market share of Nordic region released in cinemas doubling between 2012 and 2019.

Those increasingly recognised strengths have built confidence among distributors, which has encouraged them in turn to take risks on films that might have been considered a difficult sell. So a film tackling complex and challenging themes, such as May el-Toukhy’s 2019 Danish film Queen Of Hearts, could get released and find audiences in the Netherlands in a way that might never had happened if it had come from a different region or country.

Joao Paulo Abreu, Managing Director of Portuguese distributor Films4You said even conservative cinema buyers in his country had been slowly won round to the idea that Nordic films can sell. “Our cinemas are driven to blockbusters and popcorn,” he said, “we have to convince the bookers of the cinemas to play the films.”

He pointed to the success of Norwegian disaster movie in 2015 The Wave as an example. The distributor had taken the initial risk on buying the film but the success of that low-budget, high impact film unearthed an appetite among consumers and convinced buyers afterwards to try other similar films.

Abreu said US streaming platforms, such as Netflix, had played a helpful role in introducing audiences to Nordic films, building strong work of mouth. “People watched these films online but we have got the benefit of that interest because people wanted to see these films in cinemas. In the long-term the relationship between distributors, cinemas and platforms is positive.”

Marcin Luczaj, of Poland’s New Europe Film Sales also saw the high degree of exposure to Nordic culture as an important component to success, adding music to the list of influencers from the Scandinavian region. The Nordic brand was strong he said but the challenge was to be able to develop and change and not rely on a “cut-paste” repetition of previous successes. The temptation to rely on a formula was great, he said, but the Nordic countries showed no signs of complacency.

The breadth of content and the frequent introduction of new talent and new stories was understood as essential to long-term success, said Luczaj. Nordic success had become a brand, rather than a wave, thanks to consistent quality at the top of the market and the ability to surprise.  “When you go with the Nordics, a lot of buyers will believe that films will be accessible. There is a belief that there is an audience for work, on theatrical or DVD.”

A film like (Vladimar Johannsson’s Icelandic supernatural horror) Lamb is typical of regional output in its originality and smart storytelling but “in some ways it is an insane film that might have found it difficult to reach an audience once but the success of previous films helped it find success in theatres and VOD.”  “Nordic content has built a trust with distributors,” said Luczaj.

Peter Aahlen, creative producer and sales manager at Danish packaging, finance and sales studio REinvent said the different nations of the region all benefited from the overall Nordic brand, while offering their own distinctive content. And it is the diversity of content under the regional brand that offers such strong future prospects. “While the Nordic market has its internationally-know auteurs, growth was being driven by a seeming conveyor belt of emerging talent.

“There is a shift right now,” said Aahlen, “There are so many new and strong voices.” The development of diverse new talent has been helped by both streamers and by the strength of genres, notably a dynamic and diverse short-film scene. “It has been a platform and a launchpad for a lot of newcomers in a way that is affordable.”

He suggests also that the region’s storytelling tradition has deep roots in history and has learned how to adapt stories to different media, as the early adoption and rapid growth of TV series has shown.  “And it is almost insane to know how many great scriptwriters and producers are coming out of the schools.”

The international future of Nordic content then is based in its ability to build trust with distributors, exhibitors and platforms. The brand itself means that sales and distribution companies are open to trying work.

But ultimately, success will be built on transcending the brand – in making works that stand up in their own right, suggested Kok. “We are launching (Lisa Jespersen’s 2021 Danish comedy) Persona Non Grata in November and we will not launch it as a Danish movie because the movie itself is good. It is quality on its own.”

The consensus of the panel was that a reputation for intelligence, quality and accessibility was a winning combination.

Note: the panel has been recorded and is available here: https://www.youtube.com/watch?v=P-CPF_ekKWA 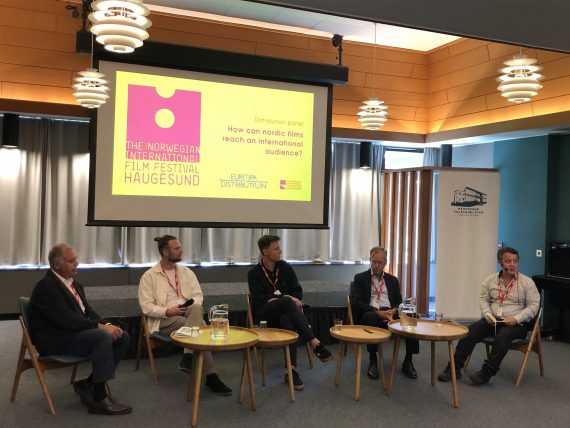