40 distributors, members of Europa Distribution, gathered in Karlovy Vary from the 2nd to the 6th of July in the scope of the Industry Event of the Festival. They were involved in an intense agenda of activities organised by the network and its partners for the occasion of Europa Distribution’s 11th Annual Conference. The fil rouge chosen to guide the conversation was the current state of the Film Industry and the role of its “Constant Gardeners”: distributors. What role do they occupy in today’s ecosystem?

The discussion began on Sunday with the Lux Film Prize of the European Parliament who, in partnership with the Karlovy Vary Film Festival, Creative Europe and Europa Distribution, presented an Open Panel on the Promotion and Visibility of AV works. The Panel, moderated by the Lux Prize’s coordinator Doris Pack, focused on the way that European public funding models and policies are influencing and supporting the circulation of European works. Christian Grece presented some interesting data from the European Audiovisual Observatory on the availability and visibility of European AV works on VoD platforms, highlighting both their scarce presence in comparison with American productions (47% vs. 87%) and the improvements that the implementation of the AVMS directive should bring to the visibility of European works online.

Members of the Cultural Committee of the European Parliament, Helga Trüpel and Bogdan Wenta, stressed the importance of not disrupting the principle of territoriality and windows, which today permit the financing of European works: “the idea of having films available immediately everywhere is simply unsustainable”. Ivo Andrle, CEO of Aerofilm and member of Europa Distribution, pointed to the practical everyday challenges distributors face when looking to find and create audiences for culturally diverse films. “The label European film does not speak to the audience, per se. For each film, we need to find a different promotional angle and the technical possibilities offered by VoD won’t change that. We need to be realistic about who our audience can be.” Peter Dinges, President of the EFADs and CEO of the German Federal Film Board, agreed on this point, insisting on the necessity of joining forces across the value chain to collect smart data about audiences and focusing on the production of fewer films with more cross-border potential.

Bogdan Wenta introduced Europa Distribution’s Open Panel on Monday, stressing the importance for the Creative Europe programme to invest in growing the audience for European cinema through Film Education. Wenta also presented the work of the Lux Film Prize: “Every year we finance the subtitling of the 3 films in the Lux Competition helping them to cross borders”. Moderated by Michael Gubbins (SampoMedia), the Panel invited academics and experts from different fields to offer their external view on the current situation.

Huw Jones, Research Associate at the University of York and author of several studies for MeCETES, presented the outcome of his latest research on Indie Film Distribution in Europe, starting by acknowledging a strong saturation of the market. “Overall admissions for indie films are growing – but average admissions are dropping and we see an overproduction of films that also have to compete with more and more appealing alternative content.” Nikolas Moschakis, Secretary General of FIAD, gave the audience a general overview of what is now happening in Brussels at the policy level, focusing on the 3 main game-changers for distribution: the new Cab-Sat regulation dealing with territoriality, the directive on Geo-blocking – which might also include audio-visual works in its scope, and (on a positive note) the Parliament’s attempt to raise the mandatory quota of European AV on VoD platforms from 20% to 30%. The outcome of these discussions should come into effect in the next few months with a big impact, which is still difficult to fully evaluate, on distributors and on the whole Film Industry landscape. Liesbeth Sträter then presented the results of the research she conducted on the policies film distributors use to stay competitive, as part of her Master programme at the University of Antwerp. Basing her study on an internal survey conducted within Europa Distribution, Sträter discussed the necessity of stronger collaboration between distributors and funds to create schemes that can help films to cross national borders, also stressing the need of improving the bureaucratic processes to access them. Ben Johnson, marketing expert and founder of GRUVI, brought the discussion back to a practical level, pointing out the necessity of implementing promotion strategies earlier in films’ lives. “Creating awareness about indie films takes time and being able to count on effective marketing assets from an early stage is crucial. More often than not, distributors see essential materials such as posters and trailers dropped on their desks far too late and don’t have the time and the manpower to adapt them. We need to move into a system where producers are encouraged to think about the audience for their films already while making it”.

Johnson went into more detail about marketing techniques that could help films connect with their audiences during the private workshop that Europa Distribution organised for its members on the 4th of July. He focused his presentation on digital marketing, recommending distributors to always engage a small part of their budget on testing: “I am specialised in marketing for indie films and yet 90% of the time my assumptions are wrong. Testing campaigns in advance is key to finding the right audience.” The idea of using data to support and challenge distributors’ intuitions concerning the target audience for their films was shared by Chris Anderson, piracy expert from MUSO. Taking a somewhat provocative position, Anderson proposed to consider piracy as source of smart data to better understand films’ potential. “You can look at the huge piracy numbers feeling depressed about your loss of revenue or you can see them as an opportunity: we always talk about finding a new audience for indie cinema but data from piracy show there’s a big one that just needs to be redirected towards legal offer.” Without underestimating the challenging to this switch, which needs to tackle both the habit of going to certain sources (with piracy website more popular than those offering free, legal offers) and the habit of not paying for content, Anderson presented data showing that “71% of EU Members state that they would stop using pirated content if there was an affordable legal alternative.”*

To conclude the workshop, distributors gathered in 4 smaller round tables to discuss new marketing tools, analyse the possibilities offered by piracy and to especially share their experiences in the field. The moderator, Michael Gubbins, summarised the outcomes of the discussions by dividing them into 6 points: saturation of the market, responsibility of producers to reach an audience, new role of Film Funds, need for smart data, possibility of sharing expertise across the value chain and occasions for distributors to join forces to fill in the knowledge gaps. “The market is not getting any easier. It’s up to us to get smarter.”

The network’s Annual Conference also represented the occasion for the Europa Distribution’s members to discuss the Association’s activities and to elect the members of the new board:

Looking ahead, Europa Distribution will be present in Haugesund in August, and then in San Sebastian in September, to continue the conversation about Film Distribution. 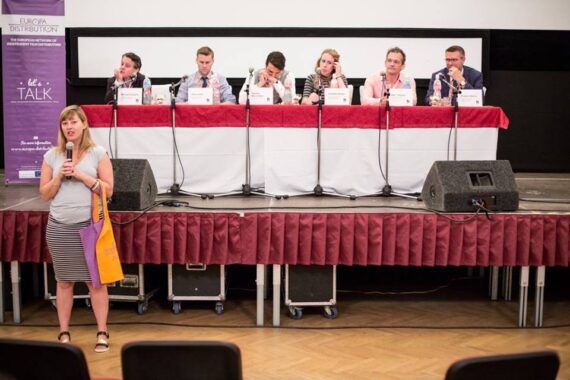