Things change and practices evolve in all businesses, and the pandemic seems to have pushed the accelerator extra hard for the film industry. After almost two years of co-existence with Covid-19, it is clear that many things we were used to will not go back to being just as “before” and in the fast-evolving arena of the film industry, were every small shift produces its domino effect across the different players, this is especially true. Where is change, there is also adaptation. How have independent film distributors adapted to the “new normal”?

Renewing its long-term partnership with the San Sebastián Film Festival, Europa Distribution organized on 19-23 September a public panel and a private workshop to examine the ideas, the experiments and the best practices that independent distributors have been testing during the pandemic putting under the spotlight those innovations that are here to stay.

The public panel, held in the San Telmo Museum on September 20th and chaired by Michael Gubbins, brought together the expertise of four distributors coming from countries with very different film industries, that dealt differently with the Covid situation. Going from Greece, where the pre-covid average yearly admittance rate was 0.8 and admissions dropped 67% from 2019 to 2020, to Sweden, where many independent cinemas chose to stay open even if only for 8 viewers per screen, passing through the Netherlands and Czech Republic where the co-existence of theatrical and VoD was already well established in the pre-Covid era, the panelists offered concrete examples showing how this world-pandemic has a different impact of local realities, calling from different solutions.

(read more about film distribution in Greece here) that saw an already low cinema attendance drops drastically due to the two lockdowns that kept cinemas closed on and off for 12 months between 2020 and 2021. Having theatrical at the core of its business, Feelgood’s first concern was to find solutions that could support cinemas, while keeping films circulating. They released Michalis Konstantatos’ All the pretty horses online through ticketing platforms that would sell virtual seats at virtual screenings, recreating digitally the cinema experience. The revenues were shared 50% with the exhibitors. Although the results in terms of admissions were not great, the operation brought awareness about the title that will be released theatrically in October, and it strengthened the connection with exhibition.

Esther Kollmann from the Netherlands acknowledged that Cinéart could sail through the Covid storm relatively safely thanks to the exceptional theatrical successes of the previous year, that guaranteed the company not only a good financial stability but also a strong catalogue of films to feed the VoD selection in 2020 and 2021. But Cinéart also did not hesitate to go straight to VoD with 20 brand new titles, and to invest more resources in digital campaigns. It was for the occasion to dedicate more energies to their B2C activities, working on the company’s already established brand to strengthen the direct connection with the audience and create awareness about new releases. Another way to connect with the audience was to have a Cinéart channel on Amazon, that people could subscribe to directly.

Having already a strong VoD base was key to Aerofilms success during the pandemic, explained Czech distributor Alzbeta Dlouhá. The company, that also manages 7 cinemas, had created Aerovod already in 2013 and in 2020 the platform quintupled the number of viewers. The Czech documentary “V Síti” (“Caught in the Net”) released by Aerofilms straight on VoD was the biggest film of the year in Czech Republic and the company’s biggest title ever. For the release of the Golden Bear winner “Bad Luck Banging or Loony Porn” since cinemas were reopening on a limited capacity, the company chose to have a mix of theatrical and on demand release and found that the availability of the film online was not taking away any audience from cinemas: online viewing helped instead creating a larger buzz about the film.

Changing perspective and moving to Sweden, a country where for the audience paying for premium online content was already a well-established practice even before the pandemic, Emelie Samuelsson from TriArt warned on the importance of focusing on theatrical to bring back people in the cinemas. During the pandemic, despite the fact that the Swedish government never imposed cinemas’ closures, the main cinema chain decided at some point to close its venues faced with the capacity limitations. This gave independent cinemas the chance to step up, despite being limited to 8 viewers per screen, and it was in this circumstances that TriArt released the documentary Greta, its biggest title of the year, keeping it for one week in cinemas only and then opening to VoD and sharing revenues with cinemas.

On September 21st all participating members of Europa Distribution took part to a private workshop where they compared experiences of recent releases, discussing their adaptation strategies to the pandemic.

Monica Felea from Bad Unicorn (Romania), Nadezda Motina from Capella Film (Russia), Ioanna Panagiotidou from Rosebud.21 (Greece), Igor Stankovic from MCF Megacom (Serbia) and Nille Stormoen from Arthaus (Norway) discussed the marketing choices and the admissions results related to their respective releases of Thomas Vinterberg’s Another Round. All of them positioned the film as a crossover, aiming at a larger audience that could go beyond cinephiles. As a celebration of life and of the joy of being together with friends the film was clearly hitting a soft spot after all these months at home. And the audience recognized the film as something worth watching in the cinemas, whenever possible.

Gianluca Buttari (Teodora Film) and Lukasz Chrusciel (Tongariro Releasing) presented the analysis of the Italian and Polish releases of Two of us. Teodora Film chose to market the film as a thriller more than a love story to attract a broader audience and worked with the press a lot on Italian nationality of the director. In order to meet his desire to have his first feature seen in cinemas, as well as in consideration of the relationship with the cinemas, Teodora Film chose not to put the film online but to wait to cinemas to reopen.

Tongariro chose to stay closer to the tenderness of the romance love story in its marketing strategy. Being a distributor focused on LGBTQ content in a country ruled by a homophobic government Tongariro always had to find alternative ways to promote its films and over time it managed to find its audience mainly online. But while for many films Tongariro only does VoD releases, with this film they chose to also address theatres’ audience, convinced that the film’s quality would allow them to reach beyond their niche.

Kim Foss (Camera Film) and Sabine Hofmann (Polyfilm) discussed about the Danish and Austrian releases of Roy Andersson’s About Endlessness. Both distributors were expecting the film to perform well thanks to the success of the director’s previous title but despite the efforts it did not meet the expected number of admissions. Kim Foss explained that during the pandemic Camera Film put a lot of energy on digital and in the promotion of their VoD channel but that still theatrical is simply irreplaceable.

Finally, Aistė Racaitytė from Kino Pavasaris (Lithuania) discussed about the release of Corpus Christi. As all the company’s titles, Corpus Christi was launched on the occasion of the Kino Pavasaris Festival that in 2020 had to move online. Since the biggest Lithuanian cinema chain would not screen the film because it had been streamed online they decided to keep the film on the digital platform and, when theatres re-opened some independent decided to screen it anyway. It was the best success of the year for arthouse cinema in Lithuania.

From the different discussions held by distributors some common points clearly emerged: the growing necessity of eventifying screenings in order to bring back audience to cinemas; the opportunity represented by VoD as an ancillary to theatrical and the possibility for both to co-exist to reach out to different audiences; the urgency to fight online piracy, and the need to educate the older audience to VoD while educating the younger one to the pleasure of the cinematic experience.

For independent distributors this pandemic was yet another test to prove their readiness in facing challenging changes, showing their capacity for quick reactions even in uncertain situations. While being a world phenomenon, Covid-19 did not hit all countries the same way. It found a variety of political responses, some more sensitive to the need to protect cultural sectors than others. It touched local markets where the audience was already used to paying premium prices for new contents, and others where issues like piracy and the consumers’ age have made VoD a difficult path. While each distributor chose a different course of action to deal with the pandemic, facing its own local reality, they all seem to be led by their passion for cinema as the main reason to stay in this crazy business.

Note: the Panel has been recorded and is available here: https://youtu.be/Ms1XVPO44DE 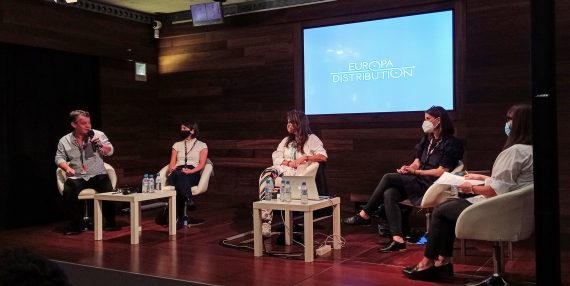