Gone are the days when the word “documentary” would only evoke tiny lions and gazelles running on your TV screens. Over the past years, documentary films have been knocking at bigger and bigger doors and gained access to “class A” film festivals, getting at the core of their official competitions and up on stage with golden awards, right next to fiction films. This phenomenon finds an echo in theaters, where documentaries are finding their audience.

Having this framework in mind, Europa Distribution organized in Nyon an open panel on music documentaries, in the scope of DOCM (the industry event of the Visions du Réel festival). This specific sub-genre of the documentary world seems to be conveying interesting results to the film industry, bringing to the cinema an audience sometimes altogether new to the theaters. To discuss the topic with Visions du Réel’s regulars, Europa Distribution gathered in Nyon Käte Schaeffer from Arsenal Filmverleih (Germany), Kim Foss from Camera Film (Denmark) and Wallie Pollé from Cineart (The Netherlands). The debate was moderated by Mathias Noschis (Alphapanda) who asked the panelists if indeed the secret of the success of films such as Amy, Janis: Little Girl Blue or Searching for Sugarman was young audience. And… not exactly. “Generally speaking, it takes twice the effort to bring to the cinema a 19 years old compared to a 69 years old. My salary is really paid by women plus 50; they are supporting the whole cultural sector. At the same time, it is true that music documentaries engage audience in a different way” commented Kim Foss. For Käte Schaeffer, different music documentaries do not necessarily speak to the same target audience.

Käte presented the case of Janis: Little Girl Blue released in Germany in January where young people were part of the targeted audience, as it had been done in the case of Amy, but the core consisted of arthouse cinema audience, 1968ers, music lovers and activists: again, plus 50. “Janis Joplin fans played a big role in our social campaign, also thanks to the help of the director Amy Berg who put us in touch with the managers of the official Janis Joplin’s fanpage” affirmed Käte. The director’s availability also helped Arsenal’s relationship with the press, securing the coverage of the film with the two main competing German television broadcasting companies (ARD and ZDF). With its 40,000 theatrical admissions, a sale to German TV and an upcoming special edition DVD, Janis did quite well for Arsenal.

The huge success of Amy was evoked throughout the whole panel, and Wallie Pollé took it upon himself to dig more into it. A big role in Cineart’s acquisition strategy is played by interest in authors so as Asif Kapadia’s previous film, Senna, was very appreciated, Amy was pre-bought on script. “With Amy we expected around 45.000 admissions and we got 207.000 instead” revealed Wallie.  The number of prints more than doubled, going from 25 to 55 and after booming with 30.000 admissions of the first weekend, Amy lasted 25 weeks in Dutch theaters.

In Wallie’s opinion, labelling a film as a documentary can be counterproductive. “Amy is a film that goes straight to the heart. At Cineart we mainly do “cross-over” documentaries such as Salt of Hearth, Sacro GRA, Pina and the key to me is always the cinematographic quality of the film. As soon as people perceive what you are showing as a film rather than a documentary, you have your audience”.

Danish distributor Camera Film released 7 music documentaries only in 2015 and Kim Foss, who directs the company, was therefore able to make a wider comparative analysis of the phenomenon. “Our first adventure with music docs was in 2012 with Searching for Sugarman which we released in cooperation with DOXBIO, a platform that selects 6 documentaries every year and screens them simultaneously in over 50 cinemas in Denmark. The film got bigger every week and we reached 25.855 admissions which is enormous for the Danish market”. Comparing admission figures between fiction feature films and music documentaries of the same scale, Kim showed how sometimes the latter got even better results. How to explain this success? Kim Foss pointed at several factors: the established presence in Denmark of documentary festivals and platforms (CPH:DOX, BOXBIO), the help of having your own cinema as a distributor (“You can’t play favorites too much with your own films but it’s still a great asset for a distributor”) and ultimately… luck. Music documentaries get the audience enthusiastic at Grand Theatret, Copenhagen

Buying films has always a big gambling part as distributors don’t have any guarantee of profit (or even of covering costs) beforehand. Music documentaries are attracting a large audience in certain territories but that doesn’t create a recipe for success.  When the audience asked distributors on stage about the balance between sales expectation and their personal appreciation of the film in the acquisition process, the answer was unanimous: “You always regret being cynical and since you can lose money anyways, better to do it on a film you love” (Kim Foss).

Europa Distribution’s activities continued later in the afternoon with a private workshop for its distributors on upcoming releases of documentaries, with a focus on joined efforts and implementation of successful strategies from other countries. 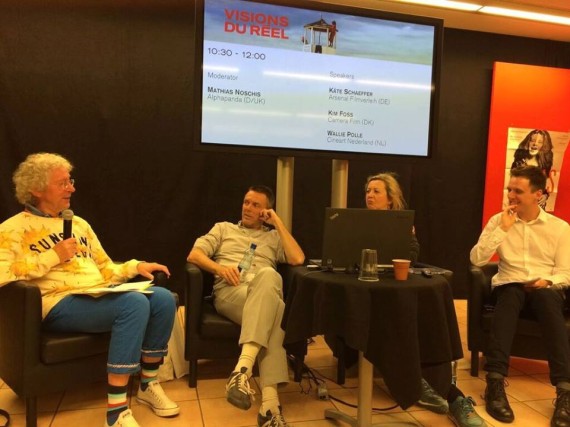