Over the past six years the expansion in Europe of big international VoD players such as Netflix and Amazon has started an irreversible process that is changing – and, according to some, disrupting – the whole film market. While it is true that those consumers who know what they want can get it “here and now” far more easily than in the past, it is also true that in the maze of logarithms ruling the VoD world, it is harder for the audience to discover any new content. On September 23rd Europa Distribution, in partnership with the San Sebastián Film Festival, tackled the issue with the help of experts from various fields during an open panel entitled “The Holy Grailof right holders: the availability and visibility of European films on VoD platforms”.

The discussion, moderated by Michael Gubbins (Sampo Media, UK), was introduced by film analyst Martin Kanzler (European Audiovisual Observatory), who tried to offer an overview of the current trends in the VoD market despite the lack of transparency that prevents any analysis to reach decisive results. What can be observed is that, despite its quick expansion, VoD still represents a small part of the overall AV market (less than 10%) and its driving force is represented by big American SVoD platforms whose primary focus is on TV series. In 2017 Netflix and Amazon Prime together accounted for 80% of the European SVoD subscriptions and both platforms are likely in the future to invest more in the creation of original contents rather that in acquisition. Discussing the presence of European films online, Kanzler pointed out that while it is true that the 30% quotas established by the AVMS directive seem to be close to be matched on average, there are no hard data to evaluate how European films are performing online. The Observatory’s working hypothesis is that, due to the very low percentage of films that are promoted on VoD platforms, only those coming to VoD after a big theatrical success have a chance of being commercially successful online.

Vit Schmarc (Artcam) contributed to the discussion portraying the reality of Czech independent distributors who are collaborating today to give their films another life online. Confirming the Observatory’s analysis, Schmarc admitted that the revenues coming from TVoD are still far from matching those coming from television and that this new market is not working for the moment to create a new audience for arthouse films, different from the one who would also watch the same in film in cinemas. Far from being pessimistic though, Schmarc pointed out that over the past six years, admissions in Czech Republic have been steadily raising both in cinemas and on VoD and that independent distributors are working together on the same VoD platforms to offer to the audience curated content.

Anna Herold, Head of AVMS Unit at the European Commission, reminded that for the Commission the battle for availability is not yet over and that a common system to calculate the quotas when it comes to TV series is still in discussion. With the current proposal, each series’ season would count as one title. Once availability is ensured, prominence of European content would become key. In the AVMS directive the principle of prominence is mentioned but the guidelines to implement it remain vague. Harold stated that the Commission is in listening mode to hear about proposals and best practices from the Film Industry on how to ensure visibility to European works online.

The Secretary General of the European Film Agency Directors (EFADs) Julie-Jeanne Régnault agreed on the need of working closely with the EU Commission and with Industry players to identify the best ways to promote European content, rewarding institutions and companies that are implementing the best campaigns and achieving the best results in terms of numbers. As major SVoD are based on personal recommendation systems, according to Régnault it would be crucial that these algorithms also take into account cultural diversity objectives and give prominence to European works. Another obstacle that remains to be removed is the lack of transparency of VoD platforms that with very few exceptions (MUBI) still refuse to share any data.

Representing the voice of the independent European platforms, the General Delegate of EUROVOD Silvia Cibien discussed about the difficulty for small platforms to compete with the international tech giants of VoD. The association reunites over 30 platforms that work on average with 77% of European content. While agreeing on the need for more transparency, Cibien stressed the financial challenge related to collecting data. The technology behind VoD platforms need to be constantly updated and more public investments in tech would be necessary to support this part of the business.

For most independent distributors in Europe, today’s business unfortunately still essentially revolves around theatrical but everyone is looking closely to the possibilities offered by VoD, trying to make their films work online. During a private brainstorm session distributors talked about the challenges they are facing to enter the VoD domain, and about the strategies they are adopting to get through. Among the issues addressed, were the need of financial and training support for distributors to experiment with VoD promotion, and the potential of collaboration among local distributors.

Europa Distribution will follow the discussion about film distribution, promotion and VoD in the future, listening to its members and proposing new occasions for exchange with the rest of the Film Industry. Next stops: Rome at MIA in October to talk about the role of film distributors as playmakers in the B2C life of films and the need for more collaboration between professionals of the whole value chain, and then in November the association will be in Amsterdam to talk about European documentaries at IDFA. Stay tuned! 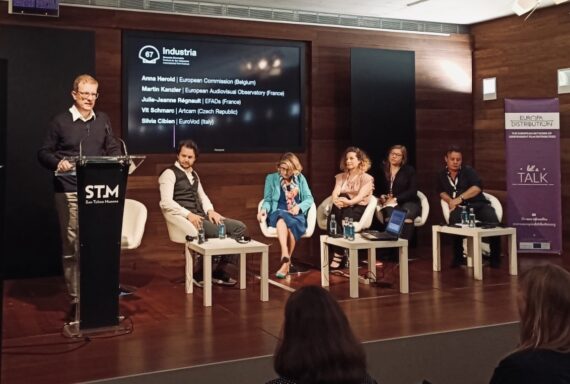