Cannes’ Marché du Film has always been an event of crucial importance for the whole international film industry. After the cancellation of the 2020 festival and the huge disruption caused by the COVID-19 pandemic, the 2021 edition of the world’s largest film market is a much-anticipated opportunity for distributors, sales agents, producers and decision-makers to finally meet and discuss their next moves in person. But what do distributors expect from this special edition of the Marché? What opportunities and challenges will they face when it comes to distributing European arthouse titles? What editorial strategies are they putting in place? To answer these questions, we spoke to five European distributors from the Europa Distribution circuit.

We first sat down with Stefano Massenzi, Head of Acquisitions at Rome-based Lucky Red. Massenzi explained that, despite the current acceptable results, summer has always been a difficult period for the Italian box office. Nevertheless, he expressed optimism and highlighted how viewers now see attending cinemas more like “an experience, a unique event”, , and demand much more than a simple screening. At Cannes, Lucky Red is bringing a raft of European productions and co-productions including Asghar Farhadi’s A Hero (France/Iran, Main Competition), Ari Folman’s Where is Anne Frank (Belgium/Luxembourg/France/Netherlands/Israel, Out of Competition), Valérie Lemercier’s Aline (France, Out of Competition) and Eva Husson’s Mothering Sunday (UK, Cannes Premiere), along with a bunch of other British and Italian flicks. “This year, the great absent is the US, owing to the sharp slowdown that affected their industry. It will be a great occasion to showcase more European films” Massenzi added, pointing out that, after the first lockdown in March 2020, European film production did not stop and went on at a very high pace.

Meanwhile, in Hungary the box office results seem much more discouraging. “Hungarian cinemas reopened in May, and with very poor results. There’s no other way to put it. We grossed about 10% of what we used to before the pandemic. We released Viktor Kossakovsky’s Gunda (Norway/USA) and Benh Zeitlin’s Wendy (USA) and they both seriously underperformed, reaching altogether a few hundred admissions. Some other Hungarian titles distributed by other companies did not reach the 1,000 threshold. Multiplexes are giving a bit of push, though,” said Gabor Boszormenyi, CEO at Budapest-based Mozinet. At Cannes, Mozinet is briging Ildikó Enyedi’s Palme d’Or nominee The Story of My Wife (Hungary/Germany/France/Italy), a big budget production with which Boszormenyi hopes to reach 100,000 domestic admissions. Thanks to some pre-pandemic hits such as Bong Joon-ho’s Parasite and an extremely cautious approach in terms of acquisitions, Mozinet navigates in healthy waters, but their prudent strategy will continue throughout the Marché and perhaps for a few years, as “these are not the right times for high-risk operations.” From last year’s Cannes, the company still has in store festival hits such as Burhan Qurbani’s Berlin Alexanderplatz (Germany/Netherlands), Laurent Tirard’s The Speech (France), Ilja Hrzsanovszkij and Jekaterina Oertel’s DAU. Natasa (Russia/Germany/Ukraine/UK) and Uberto Pasolini’s Nowhere Special (Italy/Romania/UK). The acquisitions’ focus remains all-rights and theatrical for titles “covering timely, urgent themes and characterised by a high aesthetic quality.”

Huub Roelvink from Amsterdam-based firm Cherry Pickers disclosed that the reopening of cinemas in the Netherlands has been chaotic owing to the government’s decision to reopen theatres about a week in advance of the initially announced date. However, the audience’s response and media coverage has been satisfying, and domestic titles such as Matthijs van Heijningen Jr.’s war drama The Forgotten Battle (Netherlands/Belgium) recorded solid results. Among Cherry Pickers’ recent European acquisitions are Christian Petzold’s Undine (Germany/France), Emma Dante’s The Macaluso Sisters (Italy) and Dénes Nagy’s Natural Light (Latvia/Germany/Hungary/France). From last year’s season, the company has a backlog of ten films and aims at acquiring two or three new titles at most. Commenting on the acquisition strategy, Roelvink said: “In principle, we look for Benelux rights, but we do sometimes buy Dutch rights only. Our main business is theatrical, but we also handle sales to free and pay TVs. [..] Our scope is quite broad, and we’re looking into arthouse titles. That’s the field we know. We have no preclusions in terms of territories. If we find a film good for our audience, we take it, for the right price. It’s always a matter of supply and demand.”

Despite the global hardship caused by the outbreak, 2020 has been a good year for Norway’s Arthaus. The company’s CEO Svend Jensen revealed that even though cinemas in the Oslo region were shut down in November, the great box-office results were driven by Thomas Vinterberg’s smashing hit Another Round (Denmark/Sweden/Netherlands). Moreover, the decreased number of competing titles brought by the pandemic allowed Arthaus’ films to stand out from the crowd and gain traction, “even though the busy autumn/winter seasons might shake things up.” At the moment, Arthaus’ catalogue is not too packed. Some titles were bought during the Berlinale, such as Céline Sciamma’s Petite Maman (France), Maria Schrader’s I’m Your Man (Germany), set for a release in September/October, along with Oscar-nominee Quo Vadis, Aida? by Jasmila Žbanić. In addition, Arthaus will be releasing Rémi Chayé’s Calamity Jane (France) and Henrik Schyffert’s Run Uje Run (Sweden) by the end of June. Talking about the company’s plans in Cannes, Jensen said: “We’re ready to pick up new films in Cannes. We usually do not pre-buy, we’d like to see the films completed. We’re a team of five people and we try to have at least two/three views on every interesting title in order to open internal discussions, so the acquisition process might be rather lengthy. Of course, sometimes you need to be fast – and we’re ready to act quick – but after all we’re curating our content, we’re arthouse film lovers, and this approach requires time.” In detail, Arthaus will be sourcing Norwegian rights for theatrical distribution.

Lastly, we met up with Head of Acquisitions Laure Caillol for Haut et Court. In France, the reopening of cinemas has been much-anticipated: “We acquired Another Round and we hoped that cinemas could reopen in December. That didn’t happen, so we decided to wait and keep the film until the actual reopening, which took place in May. We’re happy that we remained confident on our theatrical distribution plans.” By mid-June, Vinterberg’s film reached the 400,000 admissions milestone. Another title that Haut et Court has had in store since last year’s virtual market is Fanny Liatard and Jérémy Trouilh’s Gagarine (France), where they also served as the films’ producers and now set for release on 23 June. At Cannes, the outfit will present Jonas Carpignano’s A Chiara (Italy, Directors’ Fortnight), Marie Amiguet’s The Velvet Queen (France, Cinema for the Climate), Juho Kuosmanen’s Compartment No. 6 (Finland/Estonia/Germany/Russia, Main Competition) and Charline Bourgeois-Tacquet’s Anais in Love (France, Critics’ Week). Caillol also touched upon their Cannes strategies and explained: “As many other distributors, we’ve many films lined up in the coming months. So we’re not crazily looking for new titles, but only for the ones we fall in love with. In terms of acquisitions, our focus remains on European titles. We always look for the same type of films, namely pieces that are author-driven and boast a more or less explicit socio-political subtext. [..] We also work as producers, but we only source French rights as distributors. The pandemic didn’t change the fact that our core business is theatrical. We don’t buy for VoD or other distribution channels.”

In conclusion, all of the interviewees shared their great enthusiasm about the market’s physical edition, and mentioned the obvious advantages of seeing friends and colleagues again after a long time, discovering hidden film gems, starting smoother in-person negotiations and talks (even though for some distributors such as Boszormenyi the online environment has proved efficient) and, above all, the opportunity to enjoy the festival atmosphere and the enhanced networking opportunities. 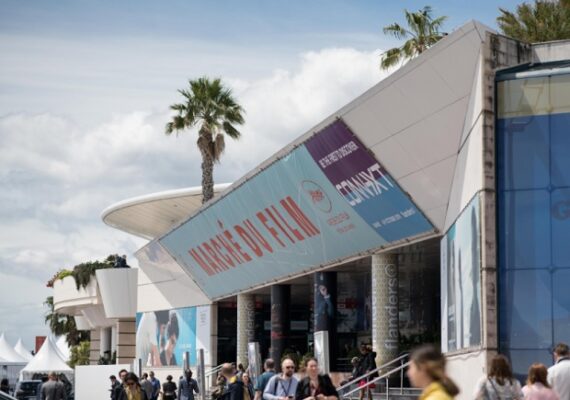