Europa Distribution and New Nordic Films – The Norwegian International Film Festival Haugesund offered a packed audience insights from a range of stakeholders in how to develop audiences in an uncertain and ever-changing market. Film is far from unique in experiencing these economic and cultural shifts – the same trends can be seen in most cultural and creative industries.

The panel demonstrated that different parts of the film industry had identified priorities and were adapting fast.

Tonje Hardesen, Festival Director of the Norwegian International Film Festival offered a strong theme for the discussion, suggesting that the right strategy for growth began with focusing on “the audience you have, not the audience you want.”

Wishful thinking was not a smart response to the growing challenges of today’s market and it was necessary to build close relationships with known audiences, using the core strengths of the festival business.

The rise of streaming was a challenge but, she said, those platforms could not match the social experience of festivals and cinemas. There was still enormous cultural, economic and social value in great curation and the power of events, though she accepted that it meant working harder on creating “fun and inclusive events.”

Tobias Åkesson, Head of Nordic Programme at Göteborg Film Festival agreed that understanding audiences was critical, but it was possible to build out from the core festival audience to grab new opportunities.

Göteborg has expanded into a year-round hybrid event, with its own streaming platform, complementing and supporting the physical festival, but with clear brand values.

The festival had some advantages, launching a platform back in 2014, which flourished during the pandemic; and it also had the advantage of remaining open as a physical festival in 2020, while much of the rest of the market was closing down.

It has worked hard to make those advantages count and to turn the short-term gain of new audiences into long-term relationships. Through its multimedia approach and screenings with cinemas around Sweden, it has become much more of a national, and international all-year brand.

Tobias, like Tonje, recognised it was a task and that creating events and brands required a lot of work. Turning the ‘audience you want’ into the ‘audience you have’ requires investment of time and resources. It also means challenging your assumptions. Among the conclusions of market research, for example, was that while younger audiences were enthusiastic about returning to cinema, older ones had learned to love online offers.

The festivals recognised that audience building was harder for cinemas than festivals, which needed to create events around each film and to keep audiences returning.  Perhaps the hardest task is building a cinema audience from scratch.

Ida Hauge Johannessen is Head of Marketing and Communication at the Vega Scene cinema, which only opened in 2018. It filled a clear gap in the arthouse film offer in the Norwegian capital Oslo but building a film culture and an active film community was tough.

She said the fundamental problem with many cinemas is that they are stuck with old models and an outdated idea of what audiences want and expect and that she needed to change the way that cinema was perceived, particularly for her key 25-35-year-old audience. Many theatres still offered a very impersonal experience, like an airport terminal where you buy a ticket and popcorn and were led in and out of screenings down dark passageways.

Vega Scene is a social experience in which audiences always go back to the place you came in with places to sit down and chat. Providing the right environment and a sense of a welcoming place is an important starting point in creating audience relationships and a sense of community. Over time, the cinema creates trust, which leaves room for exciting curation and introducing new work from distributors and festivals.

There are serious challenges ahead, including an industry problem that is beginning to have a significant impact. Covid closures created a backlog of films that are now fighting for limited space and time in cinemas.

The surfeit of films is not just a headache for cinemas, it has also created an issue for the public funds, which financed them.

Dag Asbjørnsen, Head of Section International Relations at the Norwegian Film Institute called it a potential “Norwegian nightmare” with 18 high-quality works supported competing in an overcrowded market in Autumn 2022.  It was, he suggested, just one indication of rapid changes, to which public funds had to react.

The Institute supported distribution and exhibition during and after the pandemic, including a pilot scheme offering support for marketing and distribution of Norwegian films in international markets.

But its overall approach has shifted with the institute today focusing more on talent and project development than on whether a work is made for the cinema or for a streaming platform. He said there had to be a balance between necessary support for culture and protectionism. Public policy had to accept the realities of changing markets, he said, but it was tough.

Publishers/distributors are in the front line of change in markets, public policy and audience change are having to rapidly adapt to change. They too are in the business of developing audience relationships.

Johanna Mayer is Acquisitions and Programming of Paris-based distributor Jour2fête and develops new and innovative projects in what the company calls its ‘Special Operations’ unit.

Serving the audience you have, she suggests, is always the challenge for distribution and has become ever more complicated at a time when choice in every aspect of entertainment and culture has exponentially grown. Cutting through the marketing noise is tougher every day and traditional influencers, notably newspaper critics, have declined in importance. But she suggests it is a task that does not to be undertaken alone.

An increasing element of her work has been building partnerships with common cause in connecting audiences to films. “Each film is a different story and a new adventure, and you have to partner with different institutions,” she said. There were potential partners, particularly around issues with social messages. She used the example of French environmental documentary Bigger Than Us. It may not have been the most obvious collaboration but a leading electronics company wanted to partner on the release and offered to pay for 100,000 free admissions in cinemas for young audiences. But, she said, it was hard to give away that number of tickets. Instead, Johanna worked with teachers to build the film into their class teaching, which proved a big success. While 10,000 young people took free tickets to watch the film on their own, 90,000 young people watched the film with their teachers.

And technology is also helping in building events around releases. On stage interviews with directors to support premieres can now be screened across multiple cinemas, for example. Today’s audiences want and expect something more than the traditional poster and review and publishers/distributors are having to respond.

Anastasia Plazzotta is CEO & Head of Acquisitions at Italian distributor Wanted Cinema, a company she founded in 2014, which has its own digital platform and a small cinema for children in Milan. She too recognised that it was now necessary to create events, but it had become more challenging as the market fragments. A one-size-fits-all approach did not work and the once reliable influencers, such as newspapers and radio, did not have the same power.

She worked to find effective influencers around releases to create events, but it required work to understand what drove audiences to screenings. In some cases, the influences could be exceptionally strong, such as the dance community around the release of Un Ultimo Tango. But the same influencers do not exist in the same way for every film and each release needs experimentation and adaptability.

For Wanted Cinema, which has a manifesto to support challenging new voices, it is hard work finding the key to unlock audiences but a task at which they are growing in experience.

The overarching message of the Haugesund panel was perhaps not about serving the “audience you have” but building a community around releases, whose needs and desires you understand.

Technology, new forms of communication and particularly access to data will contribute to strategies. But from all the different perspectives represented in the discussion, adaptation and innovation is still critical in a market where change threatens to be the only constant. 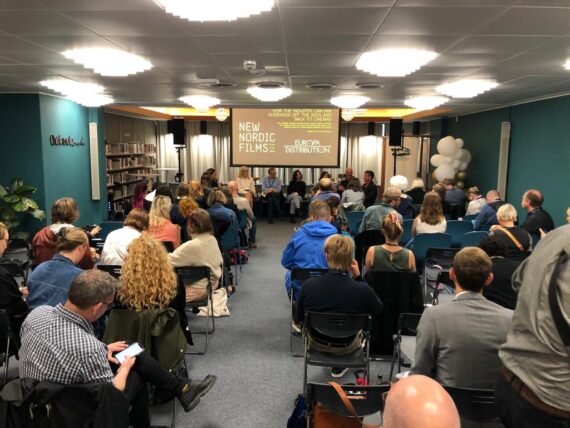