We talked with Alaa Karkouti, CEO and Co-founder of MAD Solutions and Co-founder of the Arab Cinema Center (ACC), and he told us about some aspects of the Egyptian market and the Arab world: the necessity to join forces in a landscape with no support from the states, the need of theatrical releases even though it represents a small part of the incomes. The exposure is key, and it explains all the releases are delayed till next year.

MAD Solutions exists since 2010. We worked on more than 300 Arab films, between features and shorts, and around 30 international titles. We are looking for quality. We are also very careful about the impact the movie might have on the audience, and that it doesn’t go against our ethical line. We don’t want the movies to encourage conservatism thinking. We select films that express freethinking and are brave enough to tackle unexpected topics. It’s not about having a lot of films to release. We need to have the trust of the cinemas to still give us space for films, we need to have the trust of the audience, so they keep exploring with us.

What are the particularities of your specific market, in Egypt and in the Arab world?

It’s mainly based on the personal efforts of each company or each person working. We don’t have one system that works clearly, with clear benefits for cinemas, producer, etc. You can’t really say “Arab films” in general. Each nationality is different. Even on the language point of view. For Morocco, Tunisia, and Algeria we make Arab subtitles because major part of the Arab audience don’t understand their accent. Each country is also different, in terms of censorship, in terms of what kind of logistic you have to finish and send the film… so it’s complicated. Whether the film needs to be screened in one country, two or three depends on our instinct and contacts. If we’re talking about theatrical distribution, you have to find cinemas that believe in what you are doing.

The other complicated part is about consumers. They’re used to specific things, either coming from Hollywood or from the super commercial Egyptian production. They feel no need to explore and try new things, new languages, or new nationalities. This includes the cinema owners, the main buyers. So putting unusual contents either in cinemas or on platforms, it’s a long-term work.

What was one of your biggest successes?

The first big success was with the Jordanian Theeb by Naji Abu Nowar, which was nominated for the Oscars, went in Venice, and was one of the biggest releases in the Arab world (twelve different countries). Nobody expected this success. We really tried to understand exactly the strength of this film: where to take it, how to build exposure. For example, after Venice, the producer wanted to release the film on the spot. But we felt it was still building its exposure, it needed time to be released in Jordan. So we waited for seven month to release it. First in Jordan and the Gulf countries, then the second week in Lebanon, and the third week in Egypt, to create the buzz without spending a lot of money in direct advertising. This is what worked.

Can you tell us what is the repartition of income between each support/release for your films?

The theatrical is not the main income at all. It’s always the smallest percentage, maybe 10%. The biggest are the platforms, 70% to 80%. The DVD is dead, close to 0%, unfortunately. However, the theatrical release is essential. It’s a longer process, a long-term strategy: it adds value to the film. You’re adding a little to the audience number every time, whatever the number is. It helps us keep the medias, the cinemas, the audience, the social-medias get used to the fact that there are unusual, unexpected films in the cinemas.

How did the closing of the cinemas impact you as a film distributor?

We cannot sell films without releasing them theatrically. It’s one of the main conditions for many buyers. And Covid also impacts us because some festivals preferred to delay for next year. So, for everyone the cash flow is delayed. That’s the hard effect of Covid this year.

Now that the cinemas re-opened, first at 25% capacities, now at 50%, would you like to tell us about a specific film you’re planning on to release?

We are not releasing any films of our distribution this year. None. We’re not planning any new release before February or March 2021.

First we will have the two Arab Cinema festivals this year: El Gouna Film festival will take place at the end of October, and the Cairo International Film Festival will be in December (they delayed it for about ten days, because of Covid). We will see how it goes. We are not rushing at all. Especially for the key films we have, that are already delayed for next year. What we’re doing now is using the time we have to establish the ideal strategy for each film. That’s the good part of this situation. We have the luxury of time.

What do you think should be done to help film distributors in this situation?

I believe the help needed in the industry is for producers and filmmakers, not the distribution part and not necessarily the cinemas. But there’s no program in Egypt or in the Arab world to help those. In Tunisia they started by giving payments to filmmakers who are not working because of the situation. It should be a priority to have funds, but it doesn’t exist in Egypt. The budgets to make a movie now are not small. When you want to produce, you calculate the sales: you really need the theatrical release. Those who are delayed now because of the Covid would need support from the states. It’s not happening in the Arab world.
I doubt it will happen soon.

From a more personal point of view, what brought you to film distribution?

When I was very young I wanted to be a filmmaker. I loved the cinema. I always had this crazy love, for cinema, watching almost everything, buying and reading almost everything you can find, books, magazines, everything and anything about cinema. Then I started to work as a journalist, writing about the film business, the numbers, etc. No one was doing that in the Arab world. There was no analysis of the market, and no one trying to see the bigger picture. I also worked in a couple of companies managing new cinemas and working in distribution. This helped me understand the details and the big picture of this industry. With my partner, Maher Diab, we thought the market needed a company such as MAD solutions, specialised in films and entertainment, and focusing on the quality in the Arab films, including the independent Egyptian films. It was a risk of course, but at the same time, we could feel there was a space where you could create. It was also about how to understand the numbers.

Six years ago, we established a NGO called Arab Cinema Center to promote Arab Cinema internationally. And this is what joining forces is about. Because, logically, we can’t count on the governments to be our main support, financially. In the Arab world, it’s all about the people, the companies, the festivals and the organisations working in the industry. This is what helps us. Many projects started thanks to Arab Cinema Center. With networking, introducing filmmakers to producers, many things happened thanks to this. We have forty partners joining forces, everyone putting their energy into it. We go to festivals together. We created the Critics Awards for Arab films, which has more than 150 critics from 50 countries around the world. We print and publish a magazine three times a year, talking mainly about Arab cinema. We co-created some festivals. We organised workshops and invited producers and filmmakers. 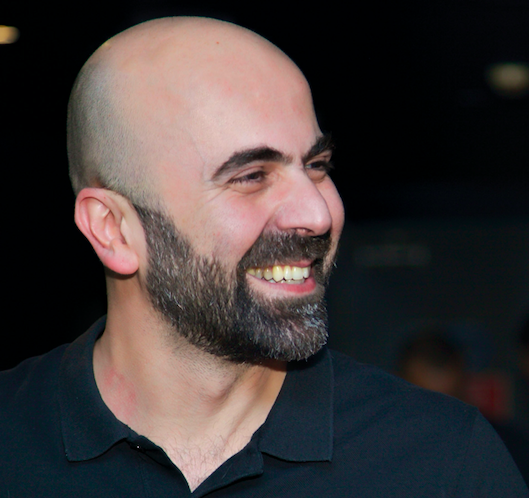