In Taiwan, cinemas have remained open throughout the COVID-19 crisis, but it has meant distributors have had to change their strategies and target different audiences. We spoke to Albert Yao, Head of Acquisitions at Swallow Wings.

What type of films do you acquire at Swallow Wings?

Swallow Wings has been focused on theatrical distribution since 2002, importing and representing European films and festival titles. A French sales agent described Swallow Wings as the Taiwanese distributor who has released the most Palme d’Or and Golden Bear winners, for example A Separation, Caesar Must Die, Touch Me Not, A White Ribbon, Amour, Winter Sleep. We are also the first Asian distributor to introduce Nuri Bilge Ceylan’s and Aleksandr Sokurov’s films to Taiwanese cinemas.

How is the COVID-19 situation affecting distribution and exhibition in Taiwan?

The cinemas have not been forced to close, but the problem is that I don’t think the audience is in the mood to go to the cinema. It is hard for us as distributors to promote movies even though we are lucky that the cinemas have managed to stay open, the box office numbers are bad.

The reason why I think the cinemas didn’t close, is first of all, they didn’t want to lose the audience because any sudden closure of the cinema would make the audience think something had happened and second of all, once you close it’s quite hard to attract the audience back. Thirdly it doesn’t just affect the cinemas, but also the stores and restaurants around the cinemas, they also needed them to stay open. It’s quite complex. The problem is there are still many costs for the cinemas, so I’m not sure what will be decided, but the government is trying to help.

In March we released For Sama, in April we decided to postpone some of our titles for example, The Invisible Life of Euridice Gusmao, because we think it needs previews, but we did release Martin Eden and the box office was quite tough, but we still need to release films.

At the end of April, we released a German film, Cut Off. I don’t think it has been released widely in Europe, just the German-speaking territories. Russia released it last year, and it was direct to VOD in Japan. It was quite big release for us (playing in over 50% of cinemas in Taiwan) and it is different to our usual line-up. Normally we don’t do thrillers or genre films but at the moment, we are trying to release more commercial titles, because they might still attract the younger audience. I think the European sales agents are surprised that we are still releasing films!

How is the VOD market in Taiwan?

The audience priorities are similar to theatrical, they really love the Korean and Japanese TV series, and this has a big influence on the performance of the Korean and Japanese films on the platforms, they are very successful. If the film has worked theatrically then we can get good results on VOD, but it’s tough. There are only a few independent VOD platforms in Taiwan, for example, there is one that specialises in documentaries.

Taiwan is quite a competitive territory, even though the kinds of films we release are quite limited. We focus on Taipei, which is the biggest city and has around 4 or 5 cinemas that focus on more arthouse films, it’s very limited.

What are the challenges in distributing European films in Taiwan?

European cinema is not mainstream in Taiwan. The audience’s first priority is always the studio titles including the big-budget action films and thrillers from Hollywood and second priority is the East Asian titles, especially Korean and Japanese films. The younger Taiwanese generation is influenced by Japanese and South Korean culture, and they both have strong, established film industries – for both commercial and arthouse titles. The third priority is the Mandarin language titles, including the films from China, Hong Kong, and Taiwan also because of the stars, or the directors they are familiar with. Then, the next priority will be the European films and film festival titles. So, I think you can see how it’s quite challenging to promote these films, particularly with the lack of well-known stars for the general Taiwanese audience. Even with the festival accolades and awards it can still be tough.

What has been your most successful release?

I have a few examples. One title was I’m Off Then, a German film, which I don’t think is particularly well known, even in Europe. It worked very well in Taiwan and also in South Korea. It was a big surprise. It is based on a popular German book, about a man who travels the Camino de Santiago. It’s a gentle film, quite touching and with beautiful scenery, we released it in Taipei on around 5 or 6 prints, and from these sites alone it made over 150,000USD (25,853 admissions). For this release, I worked with airlines, we also specifically targeted Catholic audiences. It is important to identify these different target audiences, to reach beyond the film’s general audience. Another success was the French film, La Famille Belier, which is more well-known, also the Italian film, Perfect Stranger, which I think was successful everywhere.

It is before my time at the company, but Swallow Wings released The Best of Youth, from Italy. The running time is around 6 hours, and so they held midnight screenings of the film, with audiences rewarded with a free breakfast and newspaper if they made it to the end. I like these creative marketing strategies.

I actually studied geography; I’ve found that a lot of people in the film industry have studied something completely different to what they are doing now. And in some ways, geography has helped with how I view European films. I started at Swallow Wings as an intern in 2011, and now my job involves a lot of things. I’m dealing with sales, marketing, as well as acquisitions. I like doing sales for Taiwanese films as well as promoting European films in Taiwan. 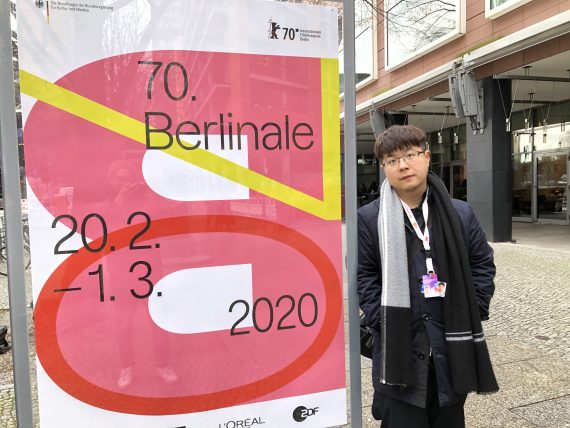