We caught up with Miguel Morales, Director of Wanda Vision, who opened up about the particularities of distributing independent films in Spain. Due to a decentralised approach for tackling the Covid-19 pandemic, Spanish distributors must keep up to date on the different restrictions affecting cinemas in every region of the country, making it very hard to schedule and promote their upcoming releases.

What kind of films make up the catalogue of Wanda Vision? What is your company’s set-up?

When we started working in film distribution back in 1992, some of our first releases were the Three Colours trilogy by Krzysztof Kieślowski and Orlando (Sally Potter, 1992). During all these years, we have followed a similar editorial policy. Our line-up focuses mainly on European and Latin American cinema. We have established good relations with some directors we followed over the years, like Kieślowski, the Dardenne brothers or Spain’s Jaime Rosales, with whom we have also produced some films. For some years now, we have been also producing and distributing nature documentaries. Those are basically our two lines of work, which we have been balancing almost from the start. In the past, we also stepped into the exhibition business, but never as cinema owners. We were involved in a few theatres in Bilbao, Santander and in Argentina, but these are no longer active, and we are partners of the Filmin streaming platform since the beginning.

What would you say are the main particularities and challenges of the Spanish market for the distribution of independent cinema?

One of the main problems of the Spanish market is that 75-80% of the turnover in cinemas goes for the majors, so the market for independent distribution is very small. The rest of the players, around 30-40 companies, have problems booking screens for their titles. Usually, we do not have the confirmations until the last week, so it becomes very difficult to promote the films properly. This year it has been particularly difficult, with the lockdowns and the restrictions. Another challenge of the Spanish market, although I think it is shared with other European territories, is that independent cinema, even national productions, are having worse results in theatres. The general box office numbers have increased in Spain over the last few years, but these are now concentrated in fewer titles.

On top of that, we also have the handicap of the dubbing. If you want to release more than 10 or 15 prints of a film in theatres you have to dub, otherwise you won’t reach an important part of the audience. It is a burden that we have to face, which means more work and higher costs. We always try to show the original version in as many cinemas as possible, but it is usually less than 10% of the screens.

How do you perceive your role as a film publisher? What do you think is the added value of your job?

I think our main job is to promote the films and help them reach an audience, that’s our main strength. Nowadays, there is a saturation of audio-visual products, with a lot of new titles coming up every week, which makes our job as distributors crucial to help the audience access independent titles. It is important that we reach them through the promotion campaigns and the marketing, letting them know that these films exist and they are available for them. Most of the time, it is an “invisible” job, because the majority of the people do not know the name of the distributors behind the films. However, those that are familiar with us know that when they see a film by Wanda Vision it means a certain quality.

Could you give us an example of a successful promotional campaign you are particularly proud of? Which was the secret ingredient?

Every film is different. Whenever we have a new title, the first thing we do is try to identify the target audience. Based on that, we build the campaign and the promotional materials, we establish the line of communication and even plan the dubbing. We always deal with independent cinema, but we must give special treatment to every title. We were very happy with The Great Beauty (Paolo Sorrentino, 2013) a few years ago. We bought it in Cannes, and we waited until the autumn to present it in local film festivals. The buzz around the film kept growing, fuelled by the different nominations and awards, so it became an instant cult film. Another example we are especially proud of is Welcome to the Sticks (Dany Boon, 2008). A lot of distributors were hesitant about this film because it was a very local story and quite difficult to adapt. In this case, we worked a lot with the dubbing, introducing words and expressions that could resonate with our audience, because it was an adaptation of a dialect spoken in the north of France. We also put a lot of effort into the promotion, and eventually, the film worked particularly well in Spain.

What is usually the repartition of income between the different windows for your films?

Nowadays, for a European film, roughly 50% of the income comes from the theatres, 5% from DVD and VOD, and the remaining 45% from the televisions. As for the market trends, DVD used to be an important part of our turnover, but now it has virtually disappeared. We have also noticed a general reduction in box office results for independent cinema. 10 years ago, a relatively known arthouse European film could make 200k admissions, but now these titles are doing around 80k. Cinema attendance has dropped considerably for our type of cinema.

What is the current situation and how is it affecting your work and your calendar of releases?

In Spain, the restrictions in theatres are imposed by the different regional governments, so it has become a real jigsaw. It is a very complex situation because every region has its own measures: in some places, cinemas are completely closed, others have restricted schedules… On top of that, there is the limitation of capacity, which goes from 30 to 65% in different theatres. Trying to schedule a release is absolute madness. Still, we have been releasing films since the end of the first lockdown in June 2020. During these months, we have released three titles: Courtroom 3H (Antonio Méndez Esparza, 2020), Dehesa – Forest of the Iberian Lynxx (Joaquín Gutiérrez Acha, 2020) and The Human Voice (Pedro Almodóvar, 2020). We have another film ready to be released in December and three more for early 2021, although we are almost 70% below our numbers from last year.

In this time, have you received any kind of special support for your business?

We had the usual support for distribution, both from MEDIA and the ICAA (Spanish Film Institute), but nothing else. The only general state measures for companies were the layoff schemes, but not all distribution companies apply for them. Apart from that, there was no specific line or support scheme this year. We hope the MEDIA programme will adapt the criteria for the next Automatic call, because the income we had in 2020 has been ridiculous. On a national level, they have created new lines of support for exhibition, which didn’t exist before, but regarding distribution, there has been nothing.

Last question, how did you start working in film distribution and how do you see the future of the market?

I used to work as an economist in the financial market. When my brother decided to launch a distribution company, he needed a person to help him with the financial part, so I decided to join in. During all these years, we had many ups and downs, and the market has changed a lot, but we have never experienced a situation like this. I think we will get over it, and people will slowly go back to the theatres. What we have to do now is to work hard in order to recover the audience and encourage them to return to the cinemas to watch independent films. 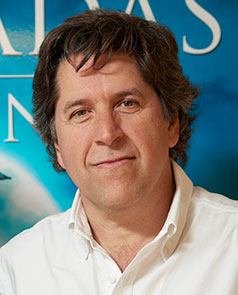