We talked to Stefan Bradea of Bad Unicorn about the particularities of distributing Independent films in Romania and the impact of the Covid on the market. The small number of dedicated arthouse cinemas makes it necessary for independent films to compete with commercial films and seduce the multiplexes audience. As for this year’s situation, the cinemas were only opened for a brief period in September and, even then, the situation was very unclear for the audience.

What’s the line-up of your company and how did you come to it?

I have been in the film distribution business in Romania for fifteen years. Monica Felea (my associate) and I both love cinema and enjoy quality films. We started Bad Unicorn in 2017 with On Body and Soul, by Ildikó Enyedi. We took the rights for the film in Berlin although our company was fresh and before it got the Golden Bear. We distributed it in Romania that year’s summer and it really paid off. We had over 20.000 admissions: that’s a very good figure for an author film in Romania. It was this film that defined our acquisition policy.

We look for the kind of film that moves people, that strikes a chord in the audience and leaves no one indifferent. Not just a film that wins an award. We constantly look for important and extremely well-made films and focus on quality rather than quantity (we release four or five film per year).

How is the film distribution market in Romania?

It’s theatrically driven. But we don’t have many arthouse cinemas. In other European cities, you have those old, beautiful cinemas that have been refurbished and are still in activity. In Romania they have been in decaying states for twenty years. There were hundreds of them throughout the country in the communist era, but in the 90’ they have been transformed in discos and bingo halls or even warehouses. Now we only have eight or nine fully functional arthouse cinemas in the country and over 90% of our market is made of multiplexes. We have to work with them and when we look for a film, we always try to see its cross-over potential. Would it be able to perform if released in a commercial area? Will it reach an audience used to “easy” films? We have to find a way in our campaign to reach this public.

How do you manage to reach the multiplexes audience?

We are very attentive to marketing identity. When we want to acquire a film, we always compare different version of posters or trailers available to use the most appropriate one (or to create our own original) to reach this kind of audience, which is easily seduced, works on recipes and take impulsive decisions (based on seeing what’s available and comparing them, on a graphical level, on the story level). We always try, from the synopsis and the artwork to the marketing and communication, to make all our films accessible. It has to be extremely well-made and comparable to the mainstream titles.

What is the usual repartition of income for the different windows?

75% of the incomes come from theatrical release. You have to include our work with cine-clubs and smaller venues that don’t play the film in DCP. It’s part of our policy that we must support big and small cinemas throughout the country, as we don’t have many. It’s important for us to present our film to all audiences, even small towns. VOD is about 15%, while Pay-TV and TV have a very small share: 10%. The TV market dropped a lot in the past five years. We do have a library of titles that are available, but the prices are extremely low.

We try to keep our films as fresh as possible, so they stay in touch with reality, and to release them one or two months after the international release, before it gets available in VOD in other countries. Because when that happens, the movie gets illegally downloadable in the whole world and it affects us very much: it represents a 50% of income.

How did the Covid impact you as an independent film distributor?

We tried to keep our expenses to a minimum and be as prepared as possible for when the cinemas would open. Cinemas were closed from March to early September. We didn’t want to delay our titles and release them as soon as possible (so they would remain fresh), and also to support the market.

The problem is that the cinemas re-opened in September, then closed early October, opened again and closed again in Bucharest (50% of our income on Romanian market) on the 20th of October. It messes up the way the audience perceives the situation, people didn’t know if cinemas were closed or open.

In September, we released two of our films, but the total admission figures were -80% compared to the same week last year. So we took a big hit. But we have no regrets:  considering the state of the cinemas, it’s a decision we fully commit.

What should be done to help the distributors in this situation?

Keep the theatrical market as open as possible and allow the cinemas, with proper restrictions, to be open for a long and non-interrupted period. It would allow us to create campaigns and get back the audience that is reluctant to come right now or doesn’t understand if the cinemas are open or not.
The second thing is that we don’t have any clear financial support for the cultural sector. There are some broad financial incentives developed by the government with European funds, but it doesn’t compensate our theatrical market in particular. We could encourage people to come and see independent films by supporting part of the film ticket value, using vouchers. The value of our delayed movies is degraded; they lost market value. It’s a damage that can be calculated and compensate somehow. That would be the logical thing to do. But the regular support we receive from the Creative Europe – Media programme, the selective and automatic support, is life-saving. Without that support we would be in a much worse situation.

Do you plan on releasing new films soon?

We can technically release any title but it would probably be a suicidal move to release anything during these next weeks, until the audience understands that the cinemas are open and safe. We have 3 or 4 titles, like Another Round, by Thomas Vinterberg, that we were planning on releasing these next months, but we think about delaying them not to damage them too much. It’s very complicated for us to have a straight strategy in this situation. We have plans for different scenarios.

What was your favourite campaign and what made it a success?

We released the Hungarian film On body and Soul, by Ildikó Enyedi, nationwide and addressed a wide array of public, among which the Hungarian speaking minority living in Romania. We went to practically all the medium and small cities in this area and set up makeshift screenings. We had outdoors screenings, used cultural houses for screenings, and didn’t hesitate to rent projection equipment when needed: hundreds of people came in and saw the film. They identified with it on the language level and also on the success the film had in Hungary. We had over 20.000 admissions.

The most recent title, the Romanian Collective, by Alexander Nanau, had 25.000 admissions. We did a very extensive tour in Romania with the journalists that are the protagonists and with the director. We had extremely good debates and special shows, in big or medium cities. But the film release was cut short by Covid.

How did you become a film distributor?

Like everyone else here, during the last days of communism, I would attend illegal videotape viewings in apartments. There was a small traffic of Jean-Claude van Damme, Rambo, John Cassavetes or European drama films that would be seen by ten people sitting on a couch at night. That’s how I started my cinema education. Eventually, in high school and college I started to attend the Cinematheque.

I started to be interested in cinema on the economic level when I was in International Business and Economics University in Bucharest. For my thesis, I chose a subject about the international film distribution. During my research, I stumbled upon a film professional that was offering a junior marketing job with a fresh distributor in Romania. So that’s how I started to work in this area. I have been doing this since then and I wouldn’t do anything else.

You know what would be good for everyone right now? Free psychological consulting sessions for everybody. But a cinema ticket is cheaper than a therapy session and this kind of films have been often characterised by our audience as balm for the soul.

I personally miss a lot the human contact. This whole period has been nervous breaking for everyone. This waiting of things to comeback somehow to a normal…

But we’ll wait and see! We’re still optimistic and hope things will improve. We will see in a few months. 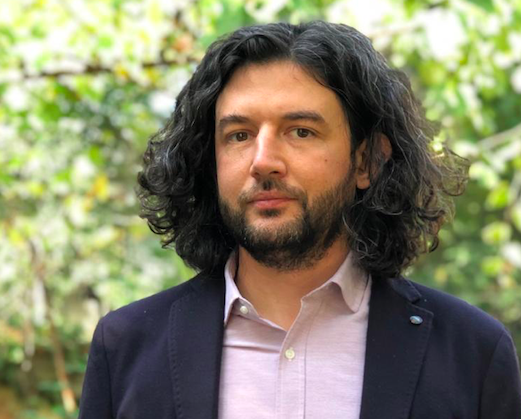