We had a chat with Thomas Bertacche, co-founder of Tucker Film, a distribution company specialised in European and Asian films. He speaks with us about the variety of work done around movies, including organising a festival and launching a streaming platform, the strategy of investing in Asian titles to work their way throughout the Covid situation and his hopes about changes to come in European distribution.

We have been working in arthouse cinemas since the 1980. Two partners, two arthouse cinemas, in Friuli, Udine, created Tucker Film. Il Centro Espressioni Cinematografiche (C.e.c.) and the Cinemazero. The C.e.c. organises since 1999 an Asian movie festival called Far East Film Festival, with genre and popular Asian movies. This is where our editorial policy comes from; we work with arthouse European movies and Asian movies because we have knowledge about those films.

We started with Departures (Yōjirō Takita, 2008), the Japanese academy winner, which it’s still our best box-office success, and a local film, Rumore bianco (Alberto Fasulo, 2008), a documentary about a river in the province of Udine. We kept on working with local or near countries European films, like Zoran, My Nephew the Idiot (Matteo Oleotto, 2013), a dark comedy directed by Oleotto, who is from our region too, or High Sun (Dalibor Matanić, 2015), a Croatian film.

We are now used to work with local production from the beginning, on a script basis, in order to discuss with the director and producer and try to understand what can be the best marketing plan. Festivals are very important for European movies, so if you can choose which festival to send it to, the strategy follows up. It would be difficult for us to choose a movie without knowing anyone, either the producer or the director.

How do you see your job of distributor and how does it help the European distribution of films?

I can’t present myself only as a distributor. We run our arthouse cinema, Visionario (it’s part of the Europa Cinemas network), we organize the Far East Film Festival, we also started to produce, with Tucker Film, and we started a small VOD channel related to Asian movies: Fareastream. So, what we bring to European distribution is first our different points of view – as exhibitor, producer and distributor – and secondly the curiosity and the passion over specific types of movies. Our duty is to try to explore what is happening in our area and help these productions to be seen in Italy.

What can you tell us about the complexities and particularities of the Italian market?

There are a lot of arthouse cinemas spread out in many big and small cities. Sometimes it’s more difficult to find space in big cities for small titles. But if you release a film in a lot of small cinemas, your P&A budget will not be small: you have to get people to know about it, you have to invest a lot. It means it’s quite impossible to release a movie without 100.000 euros of P&A. To recoup that budget is not easy: technically the funding we receive from Europe is crucial to be able to make a release without risking all the amount of the P&A.

What is the most successful promotion campaign on a European film that you had so far?

High Sun (Dalibor Matanić, 2015), is a Croatian movie that would probably not have been distributed in Italy if we hadn’t done it. We bought it in Cannes in May and decided to screen it in Italy in a journalist’s Festival, the Internazionale in Ferrara, where we thought the movie would find the most appropriate audience to appreciate it. It was a very successful screening. The movie is about the Yugoslavian war, with two characters and three love stories, one ten years before the war, one during and one ten years after. We built all the campaign around those love stories: the main actress being from Croatia and the main actor from Serbia, it was almost a Romeo and Juliet cast. But I couldn’t explain why it worked so well, I don’t know what was the secret ingredient. Sometimes I think it’s all about the title… A lot depends on the passion we put in the release and the time we have to build it. If anyone tells you, please let me know!

Considering the variety of films you release, what is your usual repartition of income between each support?

It changes from movie to movie, but between 60% and 80% comes from theatrical release and the other 20% comes sometimes from TV Channel, at some point from video (not anymore, of course), and we are trying to work with SVOD platforms… It’s difficult to sell arthouse movies to TV channels. With a small distribution company like we are, releasing three or four movies a year, our relation with TV companies is not so steady. The video market is going down, probably dying. Netflix and Prime are not interested in our kind of product. We are trying to work with niche pay-tv platforms, but the revenue is very small. We don’t have, for the moment, a real VOD channel dedicated to arthouse cinema. So, our P&A has to be recouped from theatrical release. I think – I hope – something will change soon. Because there are so many arthouse movies that don’t find a place with the big competitors, maybe Mubi or someone else will eventually build an alternative.

When it comes to the Covid-19 pandemic, were there any kind of specific Covid-recovery measures related to film distribution put in place to help you?

Promises were made, but we only got confirmation very recently. The government decided to contribute with money to the distribution companies. We still have to fill in the application. It’s going to be around 15.000 euros for each distributor, plus a support calculated on the base of the P&A and B.O. for films released between February and December 2020.

How did the Covid-19 pandemic affect your situation?

We decided to invest and are buying classics Asian movies. We bought six restored Wong Kar-wai movies, some classics from Kim Ki-duk and Hirokazu Kore-eda. We try to increase and enlarge our library. We were thinking about re-releasing In the mood for love (Wong Kar-wai, 2000) last December but were not able to do so, since the theatres are closed and… we will see. We think the audience who saw the movie in 2000 is now in the age when they would go back to see it in cinemas. For our recent acquisition, the restored movies will have a theatrical release, and we are selling the others to SVOD, that are in need of content since the increase of movie consumption during Covid, or TV Channels interested in these big names. We also bought the Infernal Affairs trilogy (2002, 2003, 2003, Andrew Lau & Alan Mak) that’s going to be restored and we want to release it in theatres but I don’t know if that will be possible: in Italy, arthouse cinemas are only showing dramas or indies, but we don’t really have cross-over theatres.

How do you see to close future of European Distribution?

This is a very difficult question. I cannot say anything certain about the future of European movies. The thing is in Europe we produce very good movies, but we don’t have the audience that goes to see them. Some people say we have to change the audience, but I think it’s the all way around. In Europe, we don’t invest money to produce films; the costs are covered by local and European funds. I believe if you are not risking your money, maybe you do not think enough about what the audience desires to watch. In Asia, there are no public funds; they have private funds, and private funds want to have revenues. You have to make a movie that can make money. Probably something will change with Netflix producing movies in Europe. In Italy those platforms will probably change another thing: the subtitles. We dub everything, all the time. But now, with these kinds of channels showing films and series only with subtitles, maybe the audience’s habit will change and we will be able to release more European films with subtitles.

It’s all about our company’s story. When we were running our arthouse cinema, we started to go to many international festivals during the years (Cannes, Berlin, Locarno and many more in Asia). We saw many movies that we thought needed to be distributed. When you go to festivals, you meet producers and directors, and you understand better the process of making a movie. People meet together to have a drink and you can build a very good relationship in this kind of situation. You start to understand the dreams of the producers and directors, and you start to help. Maybe we are not a normal distributor because if someone else wants to buy a movie we were about to buy, we don’t higher the price. The movie will be seen anyway. Distributing is part of the galaxy of things we do around cinema. 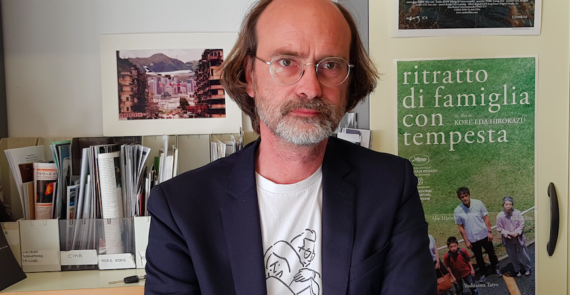